Fraternizing with the Enemy 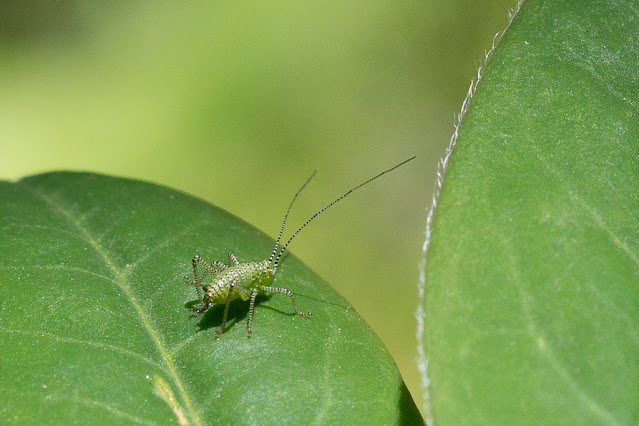 Yesterday, while I was squashing aphids on the lupines, I came across this exotic-looking critter. I think it's also an aphid, but with its zebra-striped antenna and rows of speckles on its body, a much more interesting one than usual. I didn't squash it. Yes, I know its progeny will now continue to ravage our lupines. But I could not be executioner to such a remarkable thing.

(I realize there is inherent injustice in casually killing homely aphids while sparing handsome ones, but such is life.)

Yet another amazing day weather-wise. I sat in the garden in the morning and read "Holes" by Louis Sachar, another Newbery book and one of the best ones I've read so far. It was genuinely a page-turner, both clever and funny, and I read virtually the whole thing in one sitting.

I took Olga to the cemetery after lunch. 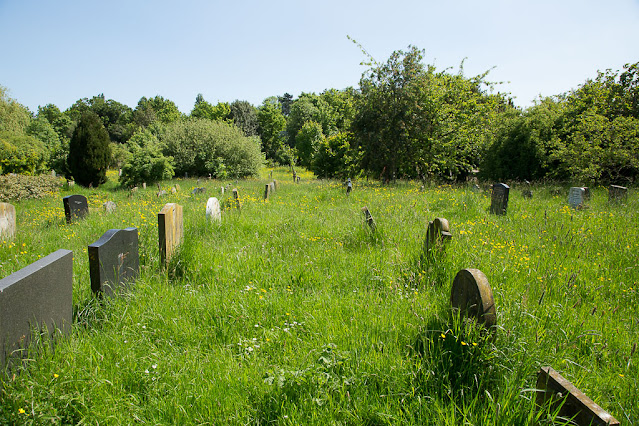 Look how wild it is now, with the yellow buttercups coming up through the tall grass. Now this is "No-Mow May" on a grand scale! Olga dropped her tennis ball somewhere along the route, and I tried to find it, but in all that grass a green ball was impossible to see. 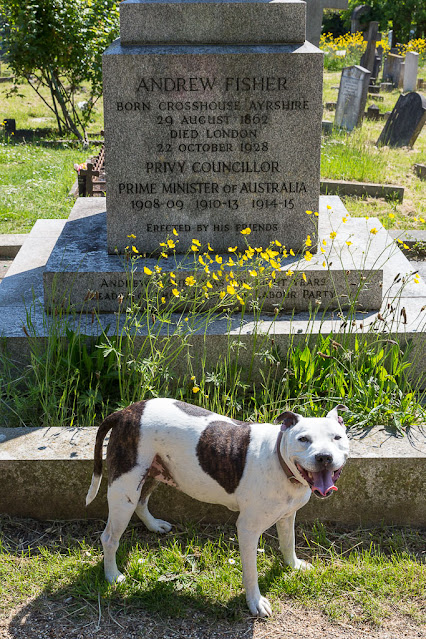 Here's the obligatory daily dog portrait, taken with my Australian blog pals especially in mind. Andrew Fisher was a three-time Australian Prime Minister for the Labor party in the early 1900s. Seems strange that he's buried in West Hampstead rather than Australia -- although he was born in Scotland, way back in 1862. Apparently he was rendered partially deaf by a cow that kicked him in the head in his youth. There's some trivia for you. (Not trivial to Fisher, though.)

Oh, before I forget, the white flower in yesterday's post is Convolvulus cneorum, or silverbush. It's never taken off in our garden because it's a sun-loving plant and it's in a semi-shady spot, but it hangs on and gives us flowers every year.
Posted by Steve Reed at 6:15 AM