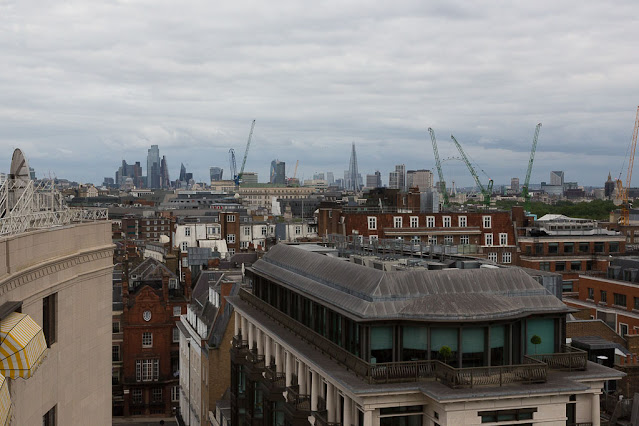 Yesterday was Dave's birthday! Woo hoo! I got him a new computer bag because the one he's been using (since before we met 12 years ago) is now officially falling apart. It has these weird-looking white wires sticking out and looks very odd, and even Dave admits it has lived its best life. Now he can finally ease it into retirement.

Our day was pretty low-key, but in the evening I took him to the rooftop of the Dorchester Hotel on Park Lane, where this was our view. We could see the towers of the City, the Shard, and beyond that Canary Wharf -- plus the London Eye and Parliament. So many cranes! 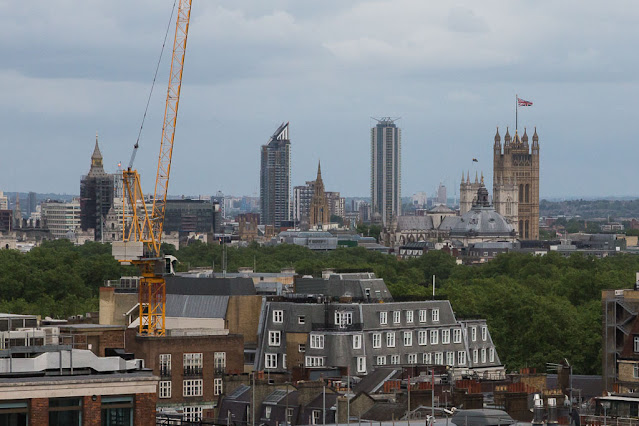 Here's a close-up of the skyline near the Palace of Westminster, where Parliament meets. The Victoria Tower is on the right, with the white twin towers of Westminster Abbey just below it; the octagonal Central Tower is between those two modern skyscrapers farther in the distance; and the Elizabeth Tower housing Big Ben is on the left, shrouded in dark scaffolding, just beyond the yellow crane. 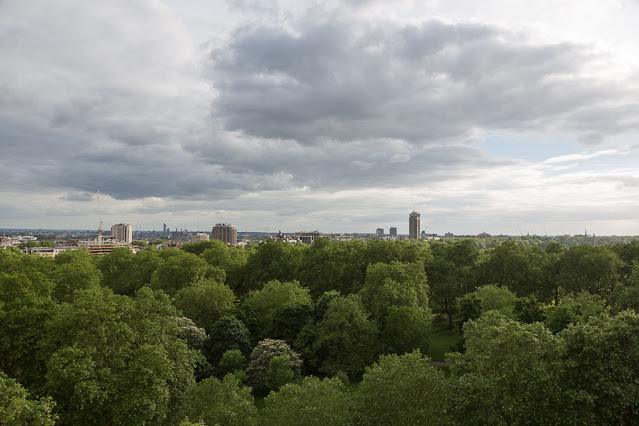 And here's our view over Hyde Park, with a lush carpet of treetops spread at our feet. In this direction we could see the dome of Royal Albert Hall and the buildings around Knightsbridge.

The Dorchester Rooftop is a pop-up restaurant, where apparently invited chefs come through and work for a few weeks presenting their culinary vision. Our chef was Adriana Cavita, whose Mexican dishes were refreshing and delicious. We don't often get Mexican food in London so this was a nice departure from the norm.

I'm just glad the weather worked out. I've been suffering no end of anxiety because it's been so chilly and rainy lately. (When I made the reservation we were still in the middle of our sunny period.) Fortunately, the cloudy weather began to break up yesterday and by the time we sat out for our dinner we were seeing rays of sunshine across the treetops.

Today, we're off on an adventure with Olga. If all goes as expected, we'll be coming to you tomorrow from the Isle of Wight!
Posted by Steve Reed at 7:07 AM