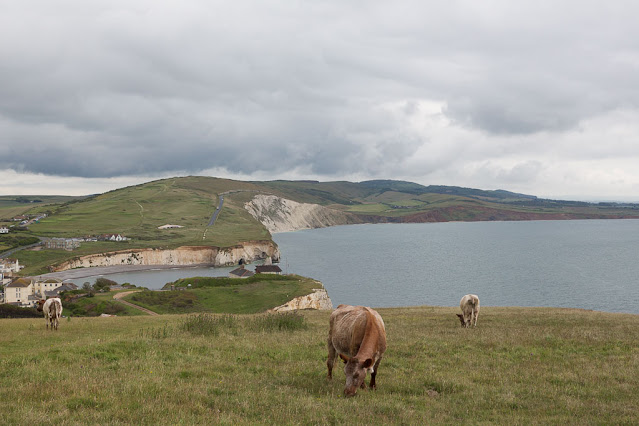 Yesterday I had a bit of an adventure. I bought a £10 all-day pass on the local bus service, and I set out for the other side of the island to see The Needles.

They're a series of interesting chalk formations projecting into the sea, surrounded by high bluffs and chalk cliffs that make for excellent walking. Dave and Olga weren't particularly into this idea -- well, Olga might have been into it, but the walk would have been too far for her -- so they stayed back at the hotel and I went on my own.

I managed to snag my favorite seat on every double-decker bus -- the front left side of the top deck -- which gave me an excellent view of the passing countryside. The west side of the island seems more quaint and more rural than the area where we're staying. There were lots of little villages and farms.

Here's a sample of what the ride was like. There are three short videos here -- one of the bus coming into the village of Brightstone; one of the bus approaching Freshwater Bay, where I got off to begin my walk along the cliffs, which you can see in the video; and one of a "chine," a forested gorge, in this case next to Alum Bay.

In the middle video, approaching Freshwater Bay, the land to the right up and over the hills is Afton Down, the site of the famous Isle of Wight music festival in 1970. (Fellow blogger Mr. Pudding recently wrote about attending this festival along with more than half a million of his closest friends.)

When I got off the bus in Freshwater Bay, I began walking up the cliffs, and was surprised to see cows grazing. You'd think the cliffs might be a hazard for them but I guess they know enough to steer clear. While I can't begin to approach the level of quality bovine photography we've come to know from Mr. Pudding, I did take a few pictures (top). 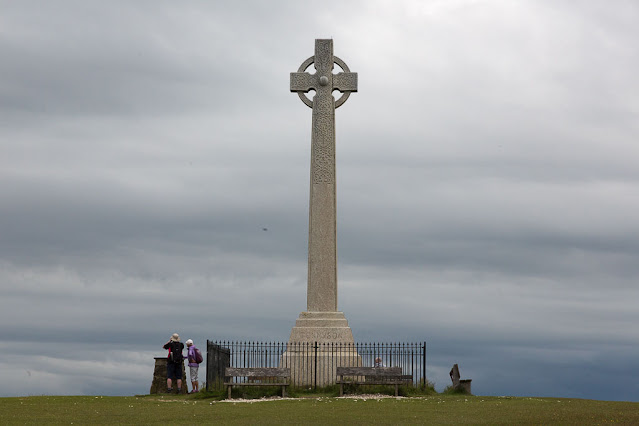 The weather was initially cloudy, but at least it wasn't raining. This 1897 monument to Alfred, Lord Tennyson, who lived near Freshwater Bay, stands atop the headland overlooking the ocean.

After about three miles of walking I reached the end of the cliffs and found The Needles: 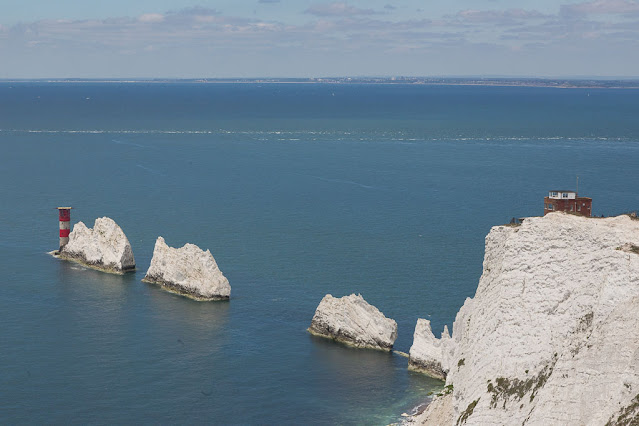 By the time I got there, as you can see, the sun had come out. The lighthouse at the tip of The Needles dates from 1859 and Wikipedia says it's still active.

It wasn't super-easy to see The Needles from the tip of the headland, which is an old military fortification of concrete battlements protecting the entrance to the Solent from naval attacks. I found just one viewpoint, offering the perspective above. 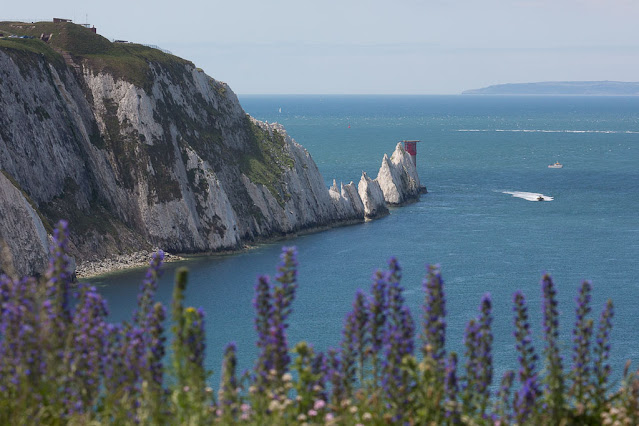 But after walking back to Alum Bay, on the other side of the headland, I could see them from another interesting angle.

At a small amusement park in Alum Bay, I stopped at a coffee shop named, for some reason, after Italian radio inventor Guglielmo Marconi. (Maybe there was a military communications station out there on the bluffs?) I heard some women in front of me have a conversation with the attendant about sandwiches, but I didn't really pay attention, and they left empty handed. When I got to the counter I saw a couple of boxed sandwiches in the pastry case, so I pointed at one and told the attendant, "I'll have that cheese sandwich."

"We're all out of cheese sandwiches, I'm afraid," he said.

Still pointing at the sandwich, which I could see with my own eyes, I said, "But...."

Turns out the "sandwich" in the box was actually just a picture of a sandwich, which I was seeing through the cellophane. It was merely a display item. Do I need glasses or what?! I laughed and said, "This is a crazy idea, but you might want to take the picture out of the display case so people don't keep trying to order cheese sandwiches!" He agreed and said he'd just been too busy. I had coffee and a brownie and by the time I left he had indeed removed the faux-sandwich from the case. 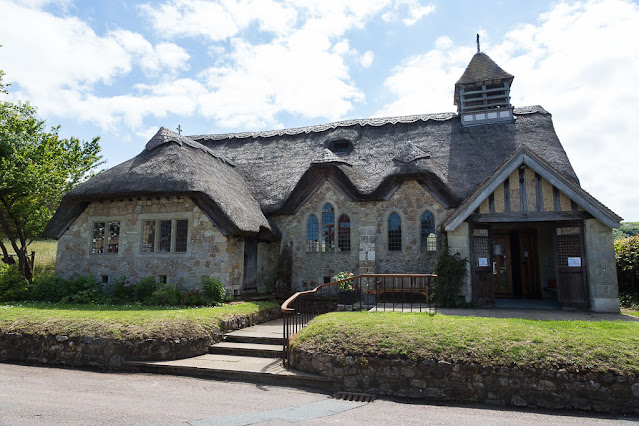 It was only about 2 p.m. so I decided to board the bus again and try to see Dimbola Lodge, the home of famous Victorian photographer Julia Margaret Cameron. (Apparently lots of artistic types used to hang out in this part of the Isle of Wight back in the Victorian era. Queen Victoria herself had a house on the north side of the island.)
On the bus, I sat next to a young man and woman and their elderly mother. They bantered about the scenery and as we passed this building (above) the woman said, "It looks like a thatched church." 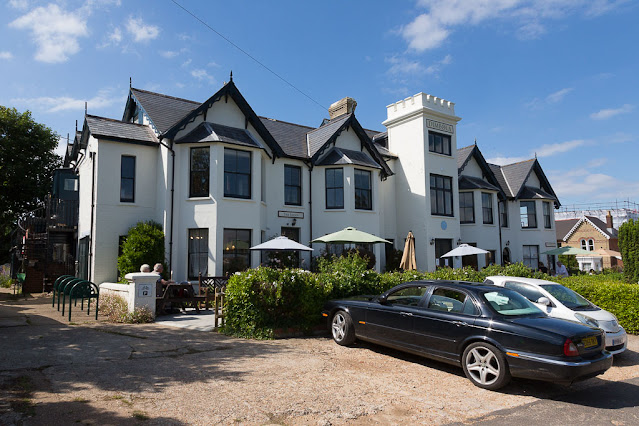 I got to Dimbola Lodge, and wouldn't you know, the museum closes at 3 p.m. Argh! So I had another coffee on the patio and read my New Yorker, because I now had two hours to kill before the next bus out of town. At least I can say I saw the outside of the house. 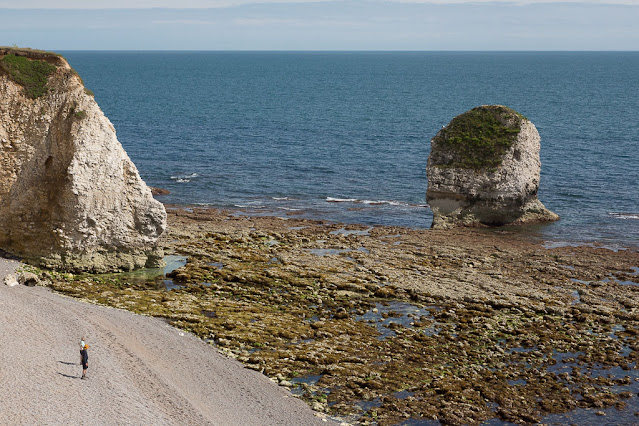 I walked down to the beach in Freshwater Bay, where there were more interesting chalk formations. 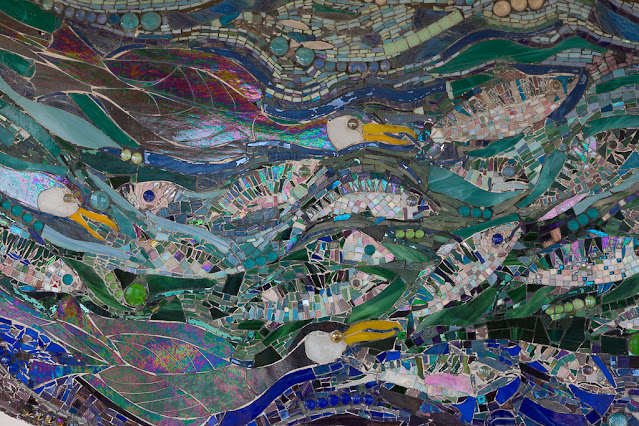 I liked this colorful mosaic in one of the beachfront shelters.

Finally, just before 5 p.m., I ventured back to the bus stop to get out of there. As I waited in the late-afternoon sun, I was treated to a long and loud argument between a young man and woman about how she refused to have sex with him blah blah blah. As he argued he smoked a large and very stinky spliff. Oh, brother.

Finally the bus arrived, and the arguing couple (thank God) didn't get on. I was back in Sandown at 7 p.m.
Posted by Steve Reed at 7:13 AM