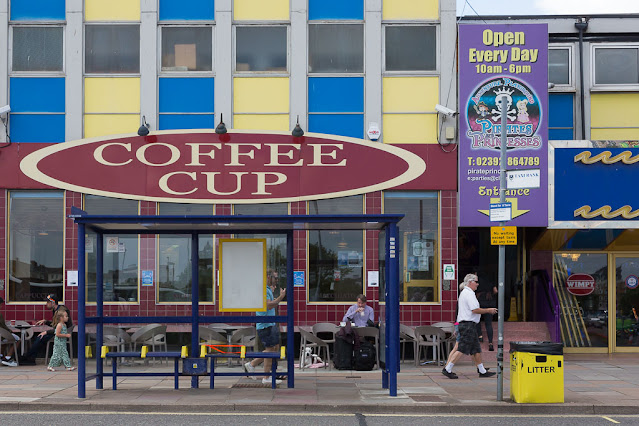 Well, we all made it to our hotel on the Isle of Wight, after a tube trip, a 1 1/2-hour train, a taxi, a hovercraft and another taxi. Whew!

I took the picture above during our lunch stop in Portsmouth, at a place called Clarence Pier that was very Coney Island. Lots of gaming arcades, snack and gift shops and other oceanfront "amusements." I had an uninspired sandwich of tuna mixed with kernels of sweet corn, which for some reason is the way British people serve tuna. It's a mysterious combination.

This was right before we hopped on the hovercraft, a very strange invention that does indeed float in mid-air several feet above the land and water surface. Riding on it was the high point of the trip for Dave, who took photos and videos and was quite enthralled by the mechanics of it all. I didn't much care how it worked as long as it got us there.

Olga made the trip just fine. She seemed to be in a state of excitement the whole time -- the good kind, in which she's energetic and enthusiastic. Maybe she was just as sick of sitting around the house as we were? 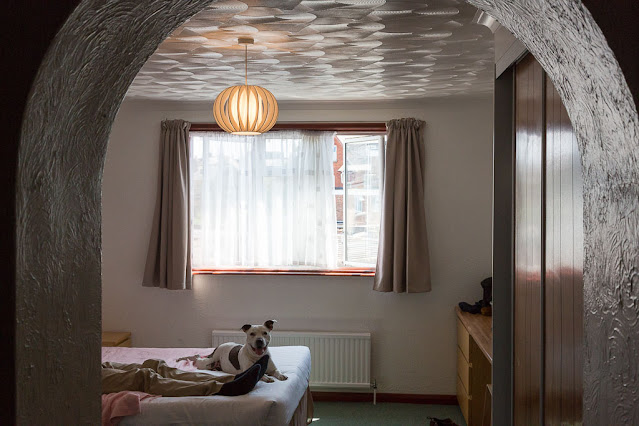 Here's our hotel room, which is very textured. Don't tell the management that Olga is on the bed.

So far we haven't done much. There are some coastal paths I hope to walk, and some of them will entail taking a bus. (The Isle of Wight is not small! It's 148 square miles!) It looks like we're going to have variable weather, so we'll see how that goes. I think Dave and Olga will hang out at the hotel if and when I take those longer walks. 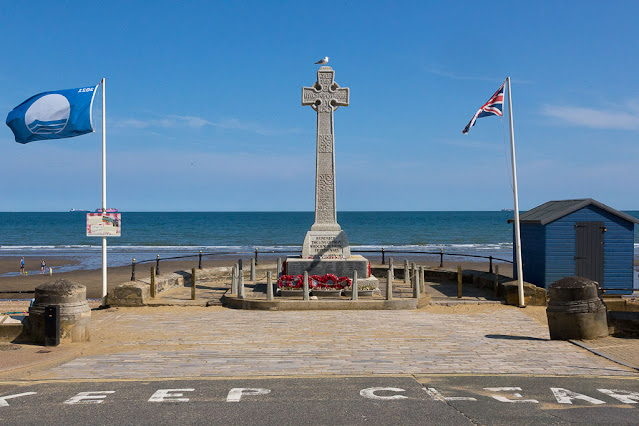 I took this down at the beach yesterday -- the omnipresent community war memorial. Doesn't it bug you that the flags aren't quite symmetrical? The blue one on the left is apparently an environmental award signifying that the beach is clean and in good shape, which indeed it seems to be.

For dinner we had fish & chips in a beachside bar & grill and then watched trashy TV in bed. Vacation time it is!
Posted by Steve Reed at 7:33 AM