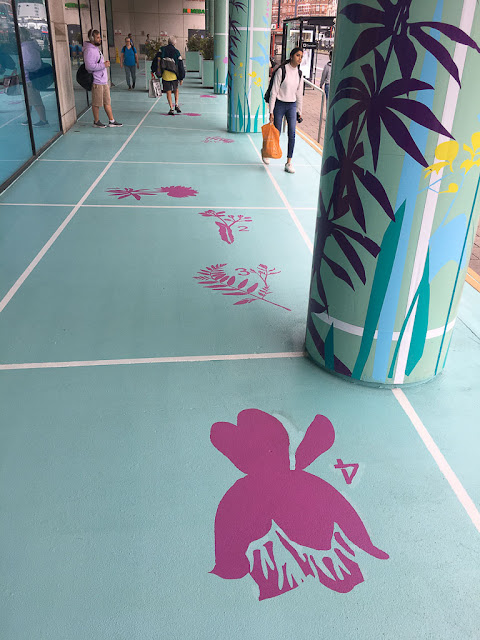 Time once again for a round-up of random photos from my iPhone, taken on my urban wanderings. (Usually on my walks to or from work, or with Olga in the mornings.)

First, the 02 Centre on Finchley Road recently got a rather tropical-looking makeover. For some reason, the botanical stencils on the ground outside all have a number next to them. At first I wondered if this was a mistake -- maybe the painters didn't realize they weren't supposed to include the stencil numbers in the job? But they've been there for a while now so I have to assume they're intentional. Floral hopscotch? I have no idea. 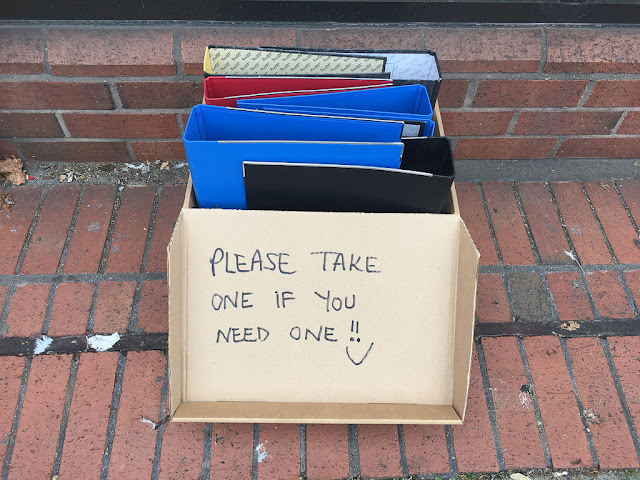 If there's anything more useless than a used three-ring binder, I don't know what it is. (Maybe a used two-ring binder.) We've thrown away tons of them in the library because of course all the records that used to be kept on paper no longer are. But kudos to this person for trying to find them a home. 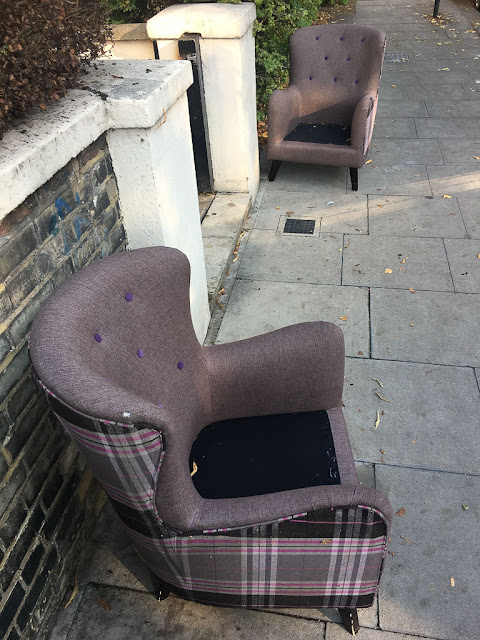 Speaking of discarding, someone was tossing out these pretty nice looking chairs. I don't understand the zeal with which people throw away furniture these days. When I was a kid we had the same couch from 1962 to 1982. 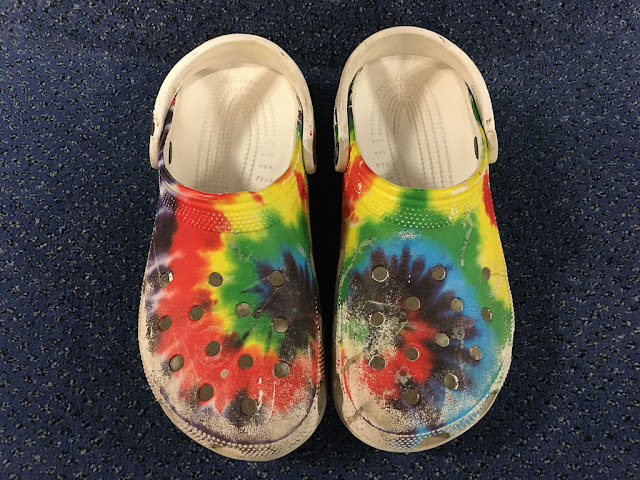 Some groovy, if well-worn, tie-dye-style Crocs left in a student gathering space at school. I am sorely tempted to buy a pair of these. They're still available and not expensive. 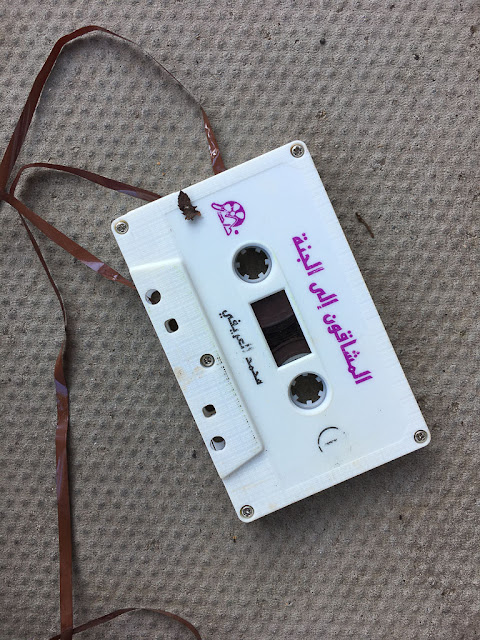 Another retro find. It's been ages since I've even seen a cassette tape. This one reminded me of my years in Morocco, when the cabbies all had Arabic music blaring from the cassette players in their cars. I learned some great Arabic music that way. (Majida el Roumi, anyone?) I'm not sure what's on this particular tape, and in any case, it's beyond playing. 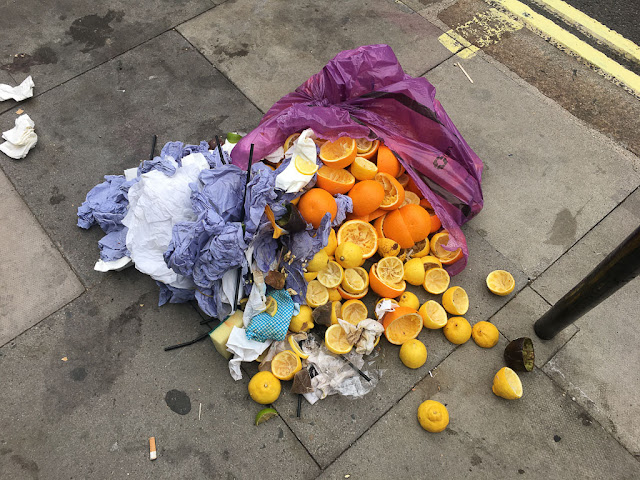 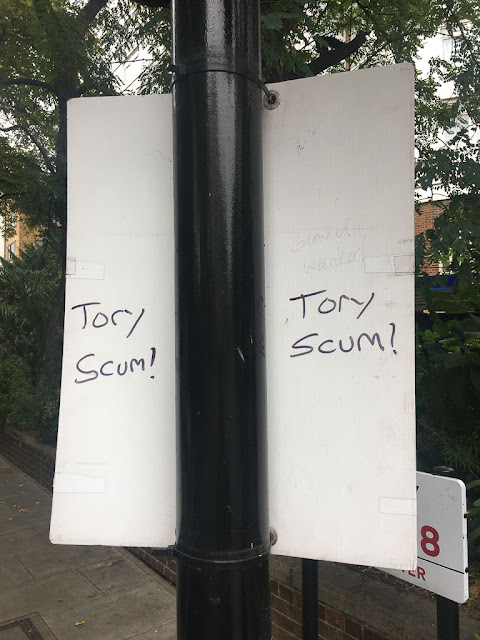 Someone venting against our new government, I presume. This was outside the St. John's Wood tube station. 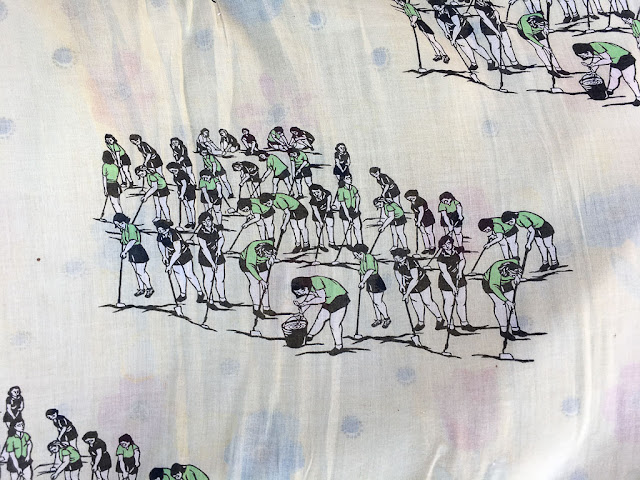 From the cover of a discarded futon in someone's rubbish pile. I thought the pattern was pretty interesting -- women planting some kind of crop? 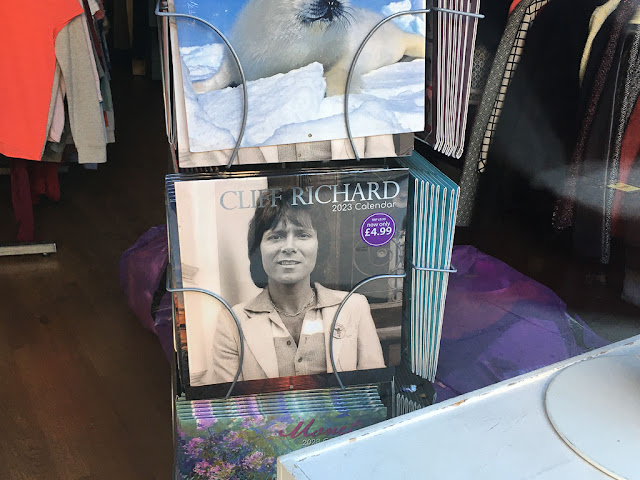 All that being tossed out and then there’s a brand-new 2023 Cliff Richard calendar? Go figure.

Cheers
P.S. Olga Girl Is In Need Of An Uncle T Biscuit For Sure

I had to laugh at this -- I'm retro. I still have cassette tapes and until I got rid of my 2001 Toyota last summer, I listened to them in the car. I am trying to weed down my three-ring photo binders by scanning the pix and tossing or distributing to others but I've been using some of the binders with page protectors for my watercolors, so in terms of space saving, it's a wash. And let me tell you about the sofa -- the one at the lake dates back to 1967, maybe, brought up from home (and it's so low, Rick is the only one who likes it); the sofa at home is from 1992 (my goal -- ditch the lake sofa for the home sofa and get a new one!). And that's just a start. I'm not saying it's good -- I hate it! But you do what you have to do. And getting rid of furniture is so hard!

Too bad no do-t-it-yourself'er has come up with some artsy thing to do with old binders.

Where are the seat cushions for the chairs??? Reupholster them and they'd be gorgeous.

The citrus garbage makes me wanna track down the person who left it and drag them back by their ears to clean it up.

Since I grew up in the UK, I remember Cliff Richards very well. Just remember some of his songs. Came to the US in mid 60s.

As for holding on to furniture, we still have my in-laws 1967 Ethan Alan sofa and it has never been reupholstered. It resides in my DH's black hole of Calcutta (aka-the man cave). It could/should be replaced. That's all I have to say.

It bugs me that the number 4 is upside down in that top photo:)

The chairs look like they could be quite beautiful if reupholstered. They look comfy. Sadly reupholstery costs as much as new furniture.

Wonder if the citrus user was making marmalade. Or juicing for a crowd.

Using the red paint for the sidewalk stencils was unfortunate. I thought blood stains until I read the text. Your imagination dollars at work.

Definitely get some Crocs. The lined ones make great winter house shoes. I consider them to be ugly beautiful.
The stenciled numbers are sort of crazy-making, aren't they?

Just the other day Mike & I were trying to remember why we still had our futon that we bought in about 1992. It's had several different mattresses, but really, we're grown ups now - can't we have a real sofa? Ha!

Never got into crocs. Encasing my feet in plastic just somehow never grabbed me. Curious about the numbers by the flowers. And somebody is definitely into juicing oranges but what's with all the purple and white tissue paper (?).

You do find the most interesting things strewn about and tossed out there, Steve.

I loved Cliff Richard and had at least one of his albums back in those days. However, I'm not tempted to buy a calendar.
Someone made a lot of lemon and orange juice.

My first thought on the numbers by the stencils is that there's a chart somewhere to identify the images by name. They appear to be different types of flora.

I'm more curious about the pattern featuring the "planting girls".

Some people buy furniture from Ikea and it's cheap and poor quality so is easily thrown away. I hope I'm not insulting someone. I'm typing on an Ikea desk which should be thrown away.

I'm not familiar with Cliff Richard and already have my Mountain Men of Alaska calendar for 2023, so I'm set. Those chairs look very uncomfortable to me.

Whenever I hear someone mention Cliff Richard I think of the song 'Livin' Doll' he performed with the Young Ones. Utterly crazy and hilarious comic gold!
https://www.youtube.com/watch?v=krn-o11Y8YM

Love the colors and composition of the rubbish oranges! it really is cool and could be painted nicely, win prizes and become famous.
The women planting look like
Chinese propaganda during Mao.

Just this morning I spent a half hour looking for a large three ring binder to put my seven years of schoolboard meeting paperwork into so I can gift it to other board members for future reference. I was unable to find one and may have to order one. But I'm waiting for the kids to get home and see if they have one squirreled away in their bedrooms that I might be able to use.

I've never found a cassette tape lying on the ground that didn't have it's tape coiled around like entrails.

Mitchell: That's capitalism in a nutshell!

Padre: Believe me, she's getting lots of them!

Jeanie: Well, being somewhat retro makes total sense. We don't need to subscribe to every new trend. But I'm surprised you're still listening to cassettes. :)

Bob: I even like the existing upholstery, though one of them has an obvious hole. I'm guessing the cushions got taken by a homeless person for use as bedding.

Pixie: Yeah, another reason things just get thrown out. Repairing costs so much.

Boud: Ha! I think they're more pink! But I'm sure they would have thought twice if they realized people were going to see bloodstains. :)

Ms Moon: I guess the numbers are supposed to make us think of botanical prints.

Bug: Well, kudos to you for making it last!

Ellen: I know -- it seems like they'd feel sweaty, doesn't it? But everyone I know who wears them loves them.

Sharon: It's interesting you had a Cliff Richard album in the USA. My impression is that he never got much traction there.

Kelly: I think that's what the numbers are supposed to evoke -- botanical prints with an identification key. But there's no key, as far as I can tell!

James and Brigitta: OK, I haven't seen that clip. I'll have to check it out! (I'm at work at the moment so can't do it here!)

Linda Sue: That's what I thought! It really is a still life. Yeah, the fabric is very Chairman Mao.

Ed: If I lived closer I could bring you a whole box of them! Ha!