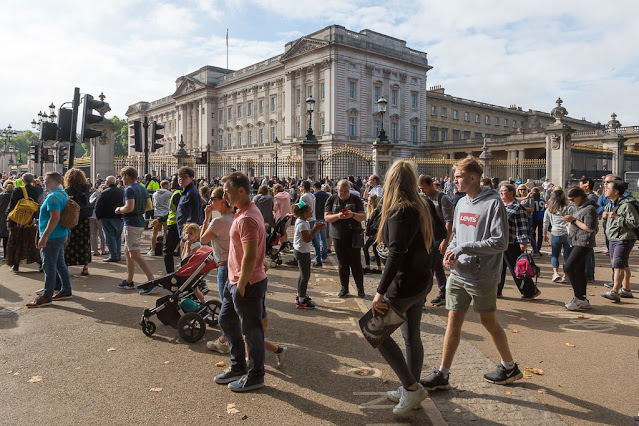 I took Olga down to Buckingham Palace yesterday to check out the scene. As expected, there were lots of people milling about... 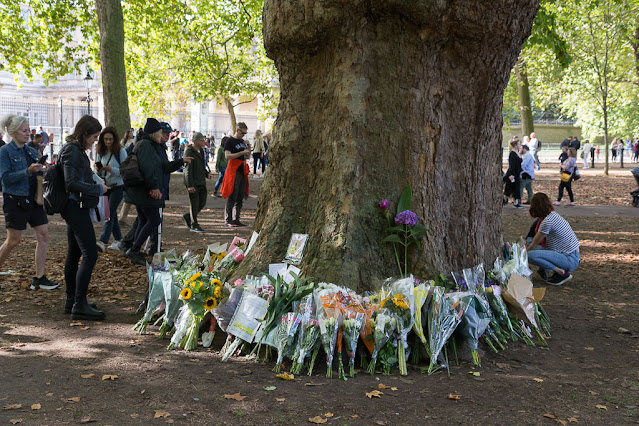 ...and many of them were laying floral tributes at the base of the trees in Green Park.

I saw one mother taking photos of her kids holding a bouquet. "OK, now let's lay them," she said. "This is a very special day that you must remember." 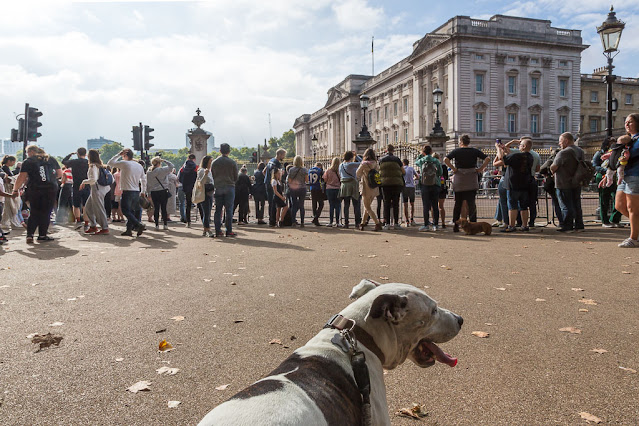 The crowds were manageable, at least at first, but we didn't get too close. Having the dog along, I didn't want to get trapped somewhere or be in too tight of a space. 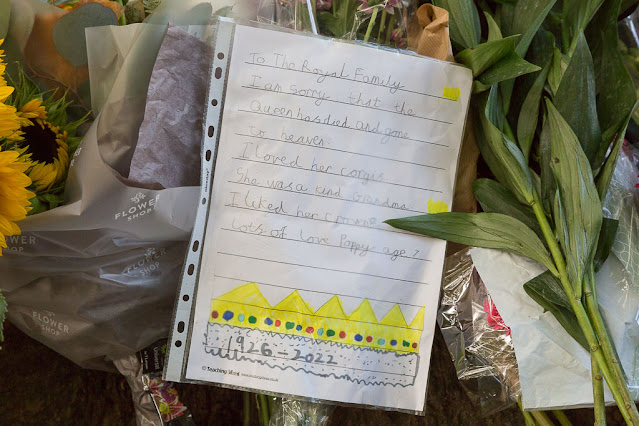 So we looked at the flowers and took some photos, and Olga chased her tennis ball in the grassy expanse of the park. Then I got the bright idea for us to make our way down The Mall toward Piccadilly Circus, where I wanted to see the memorial to the Queen on the big Jumbotron.

Olga and I walked slowly to The Mall, two specks in a river of people flowing along a sidewalk between barriers in the park. We got there and found The Mall itself barricaded off -- so no walking in the street -- and the sidewalks were growing increasingly packed. We walked down a short distance before reaching a bottleneck that I just didn't think we could get through. So we turned around and made our way back out again.

I didn't immediately realize that these crowds were waiting for the King himself, who was due to emerge a few hours later from his accession ceremony at St. James Palace and drive to Buckingham along that route. If we'd stayed, maybe we'd have seen him, but there was no way I could have lingered there amid the steadily growing hordes with the dog. We saw a red-jacketed marching band in bearskin hats, but that was all.

Olga was pretty mellow through all of this, though I'm sure she was confused. She got lots of pats and positive attention. We slowly made our way back to the park, and walked up Piccadilly toward the Circus. Some shops had tributes to the Queen in the windows. 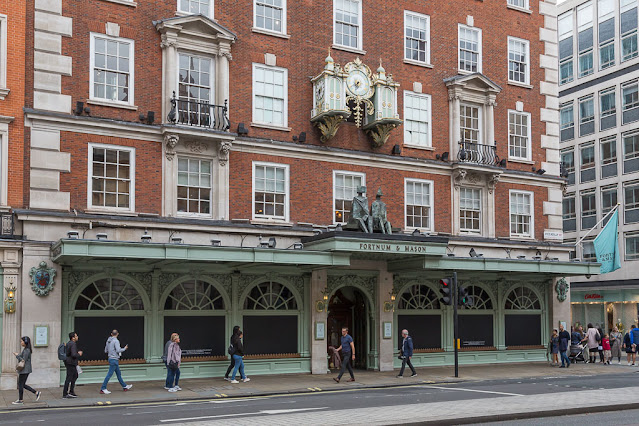 Fortnum & Mason, which usually has very colorful windows, blacked out its displays entirely. "As a mark of our respect for the extraordinary life and reign of Her Majesty Queen Elizabeth II, our windows will be covered until further notice," a message read. 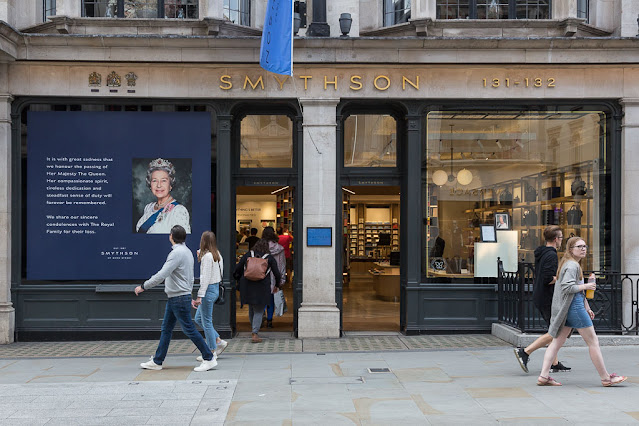 It turns out the Queen is no longer on the Jumbotron at Piccadilly Circus -- how quickly our culture moves on! We walked up Regent Street and then Bond Street to the tube, and along the way took note of other memorials. 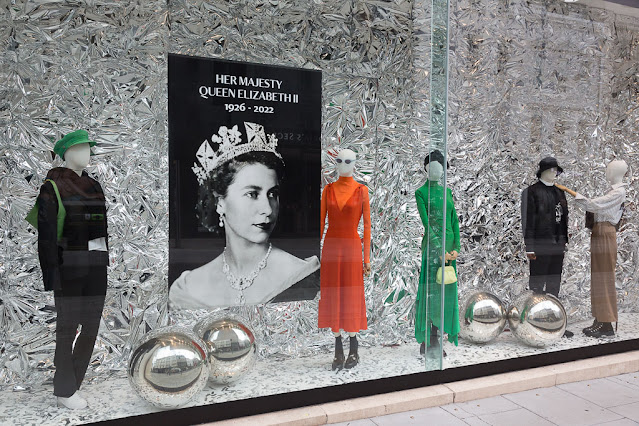 Somehow I can't see Elizabeth in any of those dresses or shoes, even as a younger woman.

Anyway, it was an interesting morning out, and we were back home again by noon. The King didn't show up at Buckingham until around that time, so it's a good thing we didn't try to wait and see him!
Posted by Steve Reed at 8:12 AM

I'm glad you live within walking distance so we could see these photos, thank you.

Thanks for taking us on the walk with you.

A morning walk among the mourning. Nice and thank you for the feeling.

No doubt there will be other visitors who, like me, have no idea what a jumbotron might be. I thought it might have something to do with elephants - but no - "A jumbotron, sometimes referred to as jumbovision, is a video display using large-screen television technology (video wall). The original technology was developed in the early 1980s by Mitsubishi Electric and Sony, which coined JumboTron as a brand name in 1985." (English: a bloody big telly)

It is rather telling how some shops celebrated her life and passing. I rather liked the store with the blacked out windows; touching.

The more I think about it, the more alien this whole royalty and its rules and practices seems to me. While rather ancient rituals are being observed, people go about their business and gawk and children write letters that are no more apt to be read by the intended receivers than a letter to Santa or a god would be.
But my goodness! The florists must be making a fortune!
And it is all, I suppose, signs of respect and in some cases, deeply felt emotion.

Thank you for sharing your day in the crowds with Olga. It's overshadowed here by memories of 9.11, but I like to feel you're witnessing for us.

This is all so interesting. Thank you for taking us on this walk through town. That picture of Fortnum & Mason is pretty striking. It almost looks abandoned with the windows blacked out like that.

It's interesting to see all the different displays. I rather like blacked out windows of the store as a sign of respect. Keep sharing what you see with us!

what happens to all of the bouquets left?

I, too, wonder about what happens to the bouquets. Perhaps they gather them up with a back hoe and take them to the local composting business. Or not. Thanks for the trip, and what a good girl was Olga.

I know that the flowers send a message but it seems like such a waste. Thanks for sharing your walk and the memorials you saw.

It is nice to see how much the people appreciated her long life of service.

I agree. Stay away from the huge crowds. It's nice to be right there but you see everything on TV.

I’m glad you both got there, someone I know has done it x

Thank you for taking that walk and sharing these photos here.

River: Actually, we took the tube to get there. Buckingham Palace is several miles from our flat.

Andrew: It was interesting to see and be part of it all.

YP: I have no idea whether the Piccadilly screen is, in fact, a brand-name Jumbotron in the strictest sense. It is definitely a bloody big telly, though.

Bob: I also thought that was very effective. I believe Fortnum & Mason famously supplies the Royal Family, so they are closely connected.

Ms Moon: It is all rather odd, but I'm not sure about the letters. I suspect some of them will be gathered up and archived.

Boud: Surprisingly, I barely thought of 9/11, even though I was living in Manhattan at the time. This year's anniversary was overshadowed in my mind.

Sharon: It does look desolate, doesn't it?

Linda Sue: No idea! As I said above, I'm sure some of the messages are gathered up and archived. They're part of history.

Allison: Seems like they might be hard to compost given that they're wrapped with plastic and ribbon and all kinds of other stuff.

Margaret: Well, I don't think it's entirely wasteful. It creates a pretty amazing display, a symbol of national affection. (I didn't add any flowers, though!)

Red: Well, it was good to take a look first-hand but I didn't need to stay there all day.

You’re the next best thing to being there!

I would have wanted to be there too, although like you, I wouldn't have hung about too long with a dog (or maybe even me!). It's interesting to see the shops and flowers. THanks for sharing them.