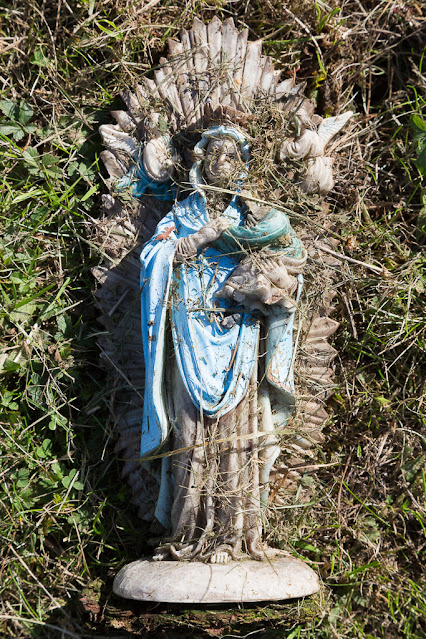 Yesterday started out as one of those days where the more I did, the more I realized I had to do. Mostly this involved laundry, vacuuming and plant-watering, but there were other, smaller associated tasks like dusting here and scrubbing there. I wanted to carry our laundry rack out to the patio, so the clothes could dry outside, but we can't open the bedroom door because of that stupid scaffold that's been erected by the builder to fix the window and roof upstairs. Argh! Mrs. Russia told me that job was going to take four days. It's already been ten, and I'm not sure that guy has even started on the roof.

Anyway...I carried the rack the long way through the living room and out onto the lawn. So the clothes got more or less dry.

I finally got the house organized to my satisfaction around 11 a.m. and sat down to read John Irving's book "In One Person." I came across it while weeding the fiction section a couple of weeks ago and I've long meant to read it -- it's the one where Irving explores bisexuality and it made quite a splash when it came out about ten years ago. I'm about 75 pages in and it hasn't quite grabbed me yet but it's tolerable.

I also had to visit Mrs. Kravitz because all our yard waste bags vanished after they were emptied by the council on Friday morning. I looked over the fence and saw, on her patio, at least one bag with our house number on it. I knocked on her door, and although she denied picking up our bags, she let me reclaim that one, which she couldn't very well argue was hers. So now we're down to just three bags. I've placed an order to the council for a few new ones. (I took Mrs. K a cutting from our purple heart plant to soften the blow of accusing her of pilfering our property.)

Finally, in early afternoon, I took Olga to the cemetery. 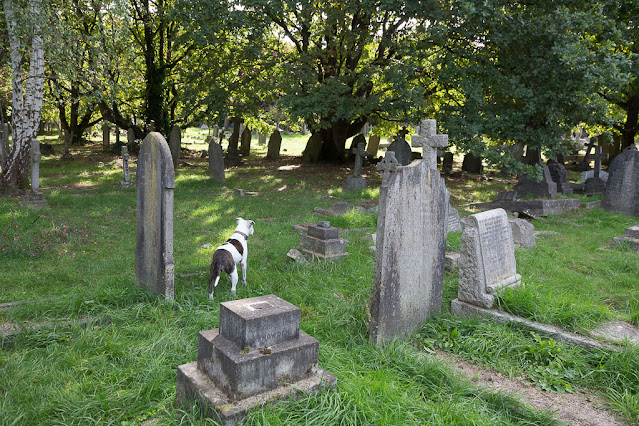 She zeroed in on the squirrels right away... 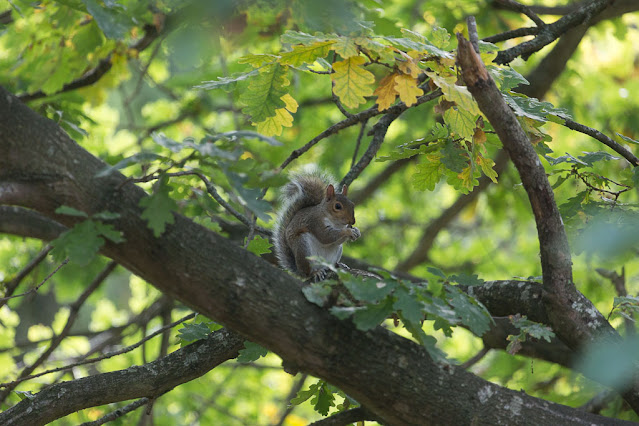 ...but they scampered up into the trees and taunted her from an unreachable branch.

She chased and gnawed her tennis ball, never mind that dental surgery, and seemed to have a great time. 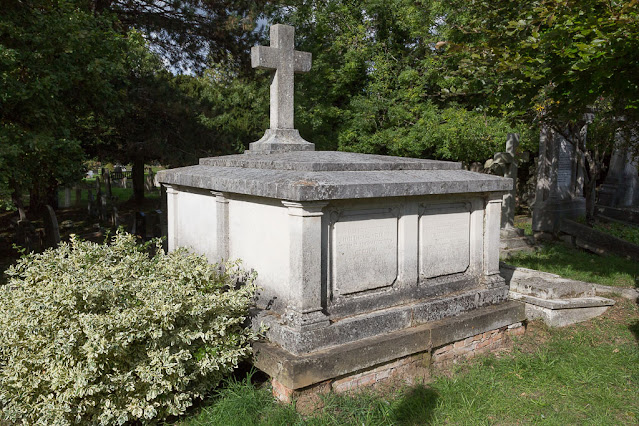 While at the cemetery we came across this tomb, the final resting place of the Russian Grand Duke Michael Michaelovitch and his wife, Sophie, Countess de Torby. I'd heard they were buried in Hampstead Cemetery and always wondered where, and yesterday I finally happened to look at the inscriptions and so figured it out. I expected something grander, but apparently they were living in "reduced circumstances" (I love that phrase) at the end of their lives. Hence, perhaps, this minimalist box.

The duke had an interesting life. A grandson of Tsar Nicholas I, he was born in 1861 and eventually married the lower-ranked Sophie, a descendant of Russian writer Alexander Pushkin, without permission. This supposedly upset his mother so much that she fell ill and died, and the emperor banished them from Russia. As it turned out this was a good thing -- they survived the Russian revolution, which killed three of the duke's brothers.

He and Sophie spent their later years in London, living at Kenwood House on Hampstead Heath (which Dave and I visited several years ago). They had three children, one of whom became a Mountbatten through marriage and was thus closely related to the British royals.

And then they wound up here. Ashes to ashes, dust to dust.

Dave and I got Chinese takeaway last week. Here are our fortunes. I guess we need to buy a lottery ticket tomorrow!
Posted by Steve Reed at 7:20 AM

Even part drying clothes outdoors speeds the process...and they smell so much nicer!
Hope the building work gets completed soon.
Good to see Olga enjoying herself.
Even though the Duke and family were in reduced circumstances, they did get to live by the Heath..and that can't be bad...as well as surviving the demise of the rest of his family.

I always get confused between “next Monday” and “this Monday.” So, if the lottery ticket doesn’t pan out, I’d buy one the following week, as well.

Olga seems to have a new lease on life since the surgery. Amazing.

As for your neighbors, I’d be spitting nails.

I trust that you bowed your head in grovelling supplication when visiting Lady Kravitz. The idea that she might purloin your bags is abhorrent. Nice to see Olga back on a squirrel hunt and feeling perky.

Also, I would spray paint my house number on all my new bags. Do you suppose Mrs k is living in reduced circumstances?

I'd have skipped the cutting for Mrs. K since, clearly, she's a thief. That would annoy me no end.

Interesting. Our yard waste bags are made from recycled paper and are single use. In other parts of town, people sometimes lose the plastic trash and recyclable plastic totes and thus paint house numbers on them but it hasn't been a problem in our neighborhood.

"Reduced circumstances" is a kind phrase. I enjoyed the short history lesson about the Grand Duke.

I'd have asked her to check the house numbers on ALL the bags she had in her possession without actually accusing her of purposely taking them...'maybe you got them by mistake'.

Just shows that getting disowned isn't always a bad thing.

Mrs. K has never gotten past the stage of a three-year old who can look at her mother with wide eyes and declare absolutely that it was not her that ate the cookies with the crumbs of those cookies lining her lying little lips.
Your neighbors...

Mrs. K is a very strange neighbor, and you are a very patient person living next door to such a person.
Really love seeing Olga out and about enjoying her time. That's wonderful.

Morganatic, new word for me , one I will use often in every day conversation. Aren't you glad we are free from being royal! We are the lucky ones!
Olga is such a pleaser, great little doggo. I love her.
Your neighbor lady is certainly trying your Buddha wisdom- Deep breath- let it be. And the upstairs folks! Nerve jangling, construction (or lack of it) props like jail bars blocking the garden. That is a job that needs to be over!

I'd spray paint the house numbers in huge see in the dark numbers! Mrs K is like my little curly haired neohew, curls packed with feathers, stoutly denying to my sister that he'd broken into the feather pillow!

Clearly Olga's surgery improved how she feels. She certainly looks perky in the cemetery - squirrels beware!

Thanks for the Wiki links for the Russians. The Countess had such a tiny waist!

I can't imagine people stealing garbage bags, but nothing should surprise me these days! Yes, buy a lottery ticket for sure. :)

I loved hearing about the Grand Duke and his wife. Interesting that they lived in Kenwood House. It was also a good thing he was gone for the revolution. That was not a good time to be a royal.
Your Mrs Kravitz is an interesting person.
P.S. Yes, the bats of Austin Texas live under the Congress Street bridge and they come out every evening to fly along the river. I watched them one time and it's a pretty dramatic thing to see as they literally blacken the sky. Those in Scottsdale were not quite that dramatic. In fact, I think I saw less than 100 but I was glad to see them there. They must be living under the bridge. I'll cheer them on as they snatch up as many mosquitos as they can.

Mrs. K is a mess, but so are the Russians, apparently. You lead such an interesting life there in London. And actually, all these antics are just the kinds of things I love from my cozy British village mysteries that I read. Ha!

That first photo is incredibly creepy

That's fascinating about the Russians (in the cemetery, not upstairs). Jenny took me to Kenwood House when we visited, which is pretty stunning. Definitely not reduced circumstances in my book, so you can imagine what the original circumstances were.

I think you may be a far better neighbor to Mrs. K than she is to you!

Meanwhile, at Chez Jeanie, Rick is on hour 10 of installing a dishwasher (my Christmas present, a little late) and my vocabulary has increased a thousand fold (as has my stress level and I'm sure my blood pressure. More than nine trips to the store or to his place to get tools and we still can't get it right. Oh, to only have to deal with Mrs. K!

I got distracted by the Grand Duke and never did leave a comment. I'm like a goldfish.

My favorite John Irving book is A Prayer for Owen Meany. I've read it so many times and I always enjoy it. Let me know how this book is.

"Reduced Circumstances", I shall apply that term to myself forthwith!
I clicked back to see Kenwood House, it's magnificent.
It's lovely to see Olga being her old self again. And yes, buy that lottery ticket, after all, someone has to win and it might as well be you.