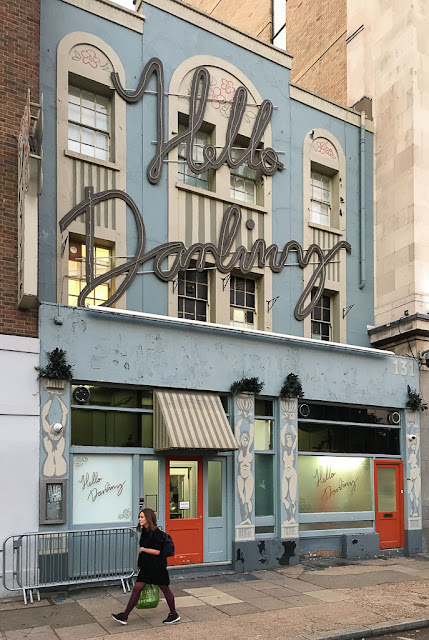 This fabulous shopfront down in Waterloo used to be a restaurant. Unfortunately, it's closed now. It may have been a casualty of the pandemic, or perhaps it just wasn't all that great. The Evening Standard didn't think much of it, describing it as "deafening," decorated with a "splodgy mural" and serving pork and duck "overcooked to a tightness and toughness that makes them more or less inedible." Ouch!

Why was I down in Waterloo to take in the gigantic scrawled sign and naked trompe l'oeil caryatids of this facade? Well, I treated myself to a little outing last night. Helen Hunt (from TV's "Mad About You" and the movie "As Good As It Gets") is appearing onstage at the Old Vic in a play called "Eureka Day," and I went to see it. (I asked Dave last week and he was not interested, so I bought myself a single ticket. Some people feel weird about going to the theater alone but I used to do it all the time in New York so it doesn't bother me in the least.)

It was an excellent play, about a privileged, progressive private school in California that's struck with an epidemic of mumps. That triggers a battle between parents, some of whom are suspicious of vaccinations. It's a fascinating look at the divisions in society and how well-meaning people deal with intractable problems. Funny, but with dramatic moments. (And of course it reminded me a lot of the school where I work, though we haven't faced an anti-vaxx crisis as far as I know. I don't even know what our vaccination requirements are.) 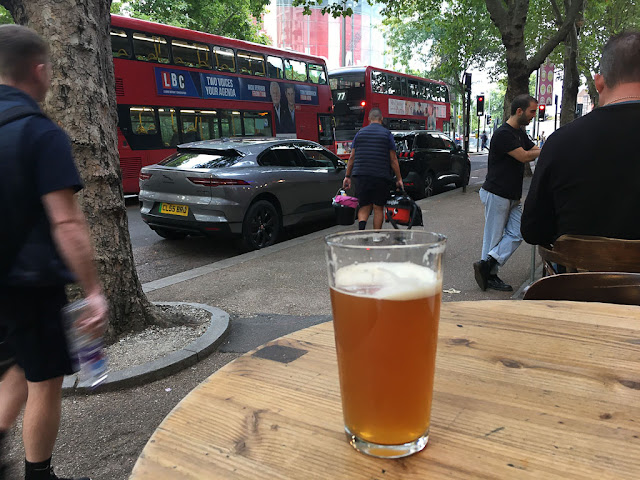 I had some time to kill before the play, so I had a soup and sandwich at Pret and then found a pub tucked into the arches beneath a railway bridge. I had a pint at an outdoor table where I read a profile in The New Yorker of scary U.S. Supreme Court justice Samuel Alito, who seems determined to turn the country into a theocracy. I was ready for some laughs after that.

I'm worried this morning because Olga is due to get her incisors removed today. I'm taking her to the vet at 8:30 a.m. There's a very small chance the x-rays will show that infection in her mouth has another source, and in that case perhaps they can save the teeth -- which would be ideal, except that we'd then have to deal with whatever is causing the infection. But I think it's virtually certain the teeth will have to go, and I worry about how that will affect her Kong-playing, not to mention her eating. No matter what, Olga is not going to be a very happy dog tonight. (She should be able to come home this evening, though, so at least she'll be here with us.)
Posted by Steve Reed at 7:01 AM

Sending love to you and Olga and hoping for a good outcome from the surgery today. I have to go through the "leaving of the dog at the vet for nasty things to happen " on Friday, so I know how you will feel all day. Keep busy is one of the answers. Please let me know how she is tonight if you have time.

No punches pulled with that restaurant review.

Good luck with Olga. I guess we will hear the result tomorrow.

I always enjoy your slice-of-life photos. Even if the restaurant sucked, their building sure is fun. I’ll be thinking of Olga, poor thing, and hope all goes well.

Back when I was single, I never minded going to movies or theaters solo because they were generally dark and everyone's focus was toward the screen/stage and not towards me. However, I hated going to nicer sit down restaurants because the opposite always seemed to be true. If I did, I took a book and went at off hours.

Best wishes to Olga and her family, may there be a good outcome.

It's great to go to events alone because you can often get a single ticket at the last minute where you couldn't get two. I've done local concerts that way. I used not to eat out alone because so many restaurants are set up for tables of four and they don't welcome single diners. Can't blame them really. Food's better at home too!

I adore Helen Hunt, and the play sounds very good.

Sending positive thoughts for Olga, and her Daddies, today.

I read that article on Alito too and I silently put him on my list of people whom I would not be sorry to see, um, have a nice, peaceful death. He's scary as hell.
I admire you for getting out and doing things. Good for you, Steve!
May Olga be fine and all go well today.

Best wishes to Olga. Hope her appointment goes smoothly and she gets relief from the infection.

I'm worried about the Supreme Court and the state of our country these days. Things don't look good, and this mid-term election is going to be so consequential.
Hope all goes well with Olga.

What a horrible restaurant review. No wonder it's closed.
That play sounds very interesting. I'd like to see it.
I'm sending lots of positive thoughts in Olga's direction.

Sorry to hear about Olga's teeth and the recurring infection.

I usually take reviews with a grain of salt as I figure that's what these people do for a living and they can't help but get jaded. A movie or restaurant may actually be enjoyable to someone who doesn't go to movies or eat out often but I think that review would have prevented me from going there.

When it coms to vaccinations, there are too many folks who have no memory of when things like mumps and measles killed people. Then there's polio, smallpox.....

As for the theocracy business, whose theology do they want to use? I feel certain it's not mine!!

My favorite Helen Hunt role is from Twister - we love that movie.

Wishing all the best for Olga & her teeth! And you guys caring for her.

I love going to the theater alone, I get more out of it . Same with eating alone, "I am a loner, Marge, a rebel...". Your background changed on my screen to a delicious ocre color yesterday- Blogger be effing with us... You will be spending a night with Olga trying to comfort her Poor girl. Poor you. Dexter had four teeth pulled having just gone in for a cleaning. They found disaster...they viewed me as a negligent dog human.

I like going to films alone although I'm not fond of dining in restaurants by myself. Alito, like many of our conservatives, is utterly terrifying.

Best wishes for a good outcome for Olga. I read that piece on Alito, he's a dangerous man. Seems to be really angry as well, bad combination.

It's hard to believe that people like Alito made it that far in the judiciary. He should have been impeached a long time ago.
All the best to you and Olga's recovery.

That looks like an interesting play. I don't like eating out by myself or going to a theatre by myself. I'm guessing one day I'll have to get used to it though.

Olga will do well and dogs can get along just fine with few or no teeth. Lucy is missing more than half her teeth but it doesn't really slow her down, maybe a little.

So glad to hear a good review of the play. (I always thought Helen Hunt was one of those actresses who didn't get the kudos she deserved). Your dinner/beer sound great. I don't mind going to the theatre alone. And sometimes you even get a better seat that way!

Good luck to Olga. Poor sweet girl -- I hope it's not too bad.

I feel for all of you; I know that feeling of a pet's impending procedure and follow-up misery only too well. The thing about animals is that they live so in the moment that they tend to push themselves toward recovery as they feel incrementally better, unlike some of us humans who are afraid to move or eat and thus delay our return to health :) Fingers and toes will be crossed here until we hear from you again.

Alito was playing the long game and is now reaping his rewards. Everyone - even those who agree with his views - is worse off because of it, even if they don't realize it.

I hope that all went with Olga's treatment and that she will zoon get over the trauma. No doubt you will be giving an update later this morning.

Came back to see if there was an Olga update. Hope all is well.

Frances: It was nerve-wracking being at work all day while the surgery was happening, but at the same time, it was good to be busy.

Mitchell: Thanks for the good thoughts.

Ed: Yeah, eating in a nice restaurant alone is always a little awkward. That's why I opted for Pret, which is basically a sandwich shop!

Sabine: Thanks for thinking of us. Mixed results, as you'll see in the subsequent post.

Boud: Yes, a ticket for one can sometimes fill a gap in the audience that would otherwise go unsold!

Bob: The play WAS good. One scene in particular was very funny.

Ms Moon: I always thought Scalia was the worst, but Alito seems to be cut from the same cloth. What is it with these old, conservative Italian catholics?!

Ellen D: Thank you. Yes, she got relief in the short term, thank goodness.

Robin: I worry too! Even when the rest of the country was swinging to the right, the Supreme Court was always dependably reasonable. It worries me that it appears to be headed in a more partisan direction.

Sharon: I know. I'm sure the restaurant's owners were sick about that review.

Ellen: I think that's a healthy perspective on reviews. I don't take them as gospel. They're more like an advisory opinion that I can choose to ignore (or not).

Kelly: Well, that's the thing about religion, right? Everyone's is different. The religious right seems to think we can go "back" to a time of monolithic Christianity, but even when most people in the USA would have called themselves Christian, there was no single denomination or philosophy.

Bug: "Twister" IS good. Haven't seen it in years.

Linda Sue: Well, it's not like animals can brush their teeth. Surely the vets don't expect owners to do that!

Margaret: Yeah, I'm not a fan of eating in a nice restaurant alone, although I've done it.

Jim: Yeah, the anger is interesting, and the fact that people have observed that he seems to be getting MORE angry, even as his perspectives are dominating. As the article observed, it may be because he knows society at large is moving in another direction.

Allison: Well, he was appointed by Republicans, and he has certainly served them well!

Pixie: My stepmother's chihuahua had all of her teeth removed and she's just fine!

Jeanie: Well, she did get an Oscar for "As Good As It Gets," so at least there's that.

Jenny-O: Yeah, animals are made to survive. They really do push through. You're right about Alito. The anti-abortion ruling hurts pro-life women and their daughters as much as pro-choice ones.

YP: I like this new language you've invented with the letter Z dominant!