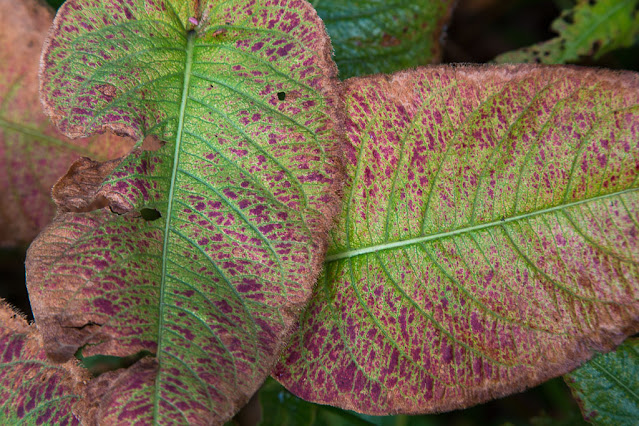 I've been habitually checking the news coverage of Hurricane Ian in Florida. The areas where my family and friends live in Tampa, Sarasota and Jacksonville were largely spared, it seems. I spent several years in Venice, Fla., which is the closest I ever lived to where the storm came ashore farther south in Fort Myers. But even Venice seems to have come through pretty well -- there's been some heavy damage to the community theater but that's all I've seen online.

My brother in Jacksonville wrote yesterday afternoon: "We are home and sitting around keeping an eye on stuff. Mom was evacuated to a retirement center on the north side that (unlike where she lives now) is not in a flood zone. So far so good!"

Still, it was a huge storm and devastating to the Fort Myers region. We vacationed on Sanibel Island a couple of times when I was a child, and those memories are replaying in my mind as I see news coverage from that area. The bridge to Sanibel was demolished by the storm and apparently the island was really hammered. I think about the little beach cabins where we stayed in the summer of 1979, with their linoleum floors and jalousie windows. Each one had a cute beachy name like "conch" and "sea grape." Those buildings seemed light as a feather and although that resort still existed as of earlier this year, I wonder if it exists today. I suppose the buildings would have been modernized and brought up to more current hurricane codes in the intervening years, so maybe it does. 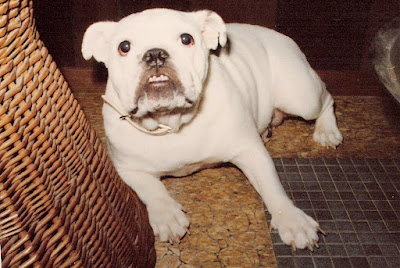 Somewhere I have a whole roll of film from that weeklong stay, but the only picture I can find at the moment is this one, of our old bulldog Meatball reclining on the cabin floor. We took her and our little dachshund, Mabel, and those dogs just did not know what to make of the beach. Mabel was terrified of the gently rolling waves coming in off the Gulf.

Anyway, that's where my mind is at the moment, reliving my memories of Southwest Florida.

Here in London, it's life as usual. I'm once again on a campaign to get kids to return their overdue summer books. Plus ça change.

(Top photo: The autumnal leaves of the persicaria in our garden.)
Posted by Steve Reed at 7:28 AM

Meatball was a beauty. I suppose dachshunds aren’t known for being water dogs. Not much dog paddle in them.

So relieve your loved ones are OK. We can’t believe what we’ve been seeing on the news.

Until the next time... I am glad that Ian has left Florida and that your immediate family are safe and well.

As for getting the library books back, may I suggest that you invest in a military uniform... possibly from the time of The Third Reich. You might also practise goose-stepping. This should stimulate book returns.

Glad to hear that your family is safe. With Michael now owning a beach house in North Carolina, we watch the weather reports a lot closer now. I witnessed a category 1 storm in 2003 when it hit Virginia, and I was scared to death. I cannot imagine a storm with greater intensity.

We're set for a lot of rain and wind later today, and perhaps flooding in low-lying areas, but nothing seriously bad ... fingers crossed.

I'm glad your family's ok. I've now heard from all my friends in Florida, all okay if you don't count a torn off lanai suffered by one.

I spent a bit of a long ago Florida trip on Sanibel and Captiva,amazed at the shells and birds. It's probably been reshaped entirely by Ian. And the Everglades, another wonderful time, was reshaped by Andrew. Key West, too. It's a giant sculptor at work and we're the materials.

I guess it puts library books into perspective.

My mother's family used to vacation on Sanibel back in the old, old days and she talked about it her entire life.
I swear to you, Steve- I just can't take any more even thinking about that storm. I feel horrible saying that but my mind can't fit itself around it. I remember so many horrible storms hitting Florida and I've been in a few and I know how devastating and frightening they are but this one is just unbelievable. And with just the tiniest difference it could have been us here in the big bend.
With the changes we've created in the planet we are the ones who are to blame for these devastating storms. And they are going to just keep happening.

I'm so grateful your family is OK and your mom safely moved to an evac retirement place in a safer district. We used to go to Sanibel, too, and it's hard to imagine it now. Rick's dad came through pretty well -- some property damage but nothing, really, compared to so many.

I think we might have stayed at those (or similar) same beach cabins on Sanibel about 15 years ago. What a great memory. Sadly, I can't imagine they weren't destroyed by the deluge called Ian. However, one lives in hope.

What a relief it is to know that your family is okay and that the worst of the storm has moved on.
Whenever I see the word Sanibel it makes me think of the song by Crosby, Stills, and Nash. It's a beauty.

It's non-stop coverage here unless I turn it off which I have been lately. I just can't fathom how 200 family groups decided to stay on Sanibel knowing the huge storm surge heading their way. I haven't checked this morning but last night there were already 10 confirmed deaths. I suspect that number will go much higher in the coming days.

The father of our church deacon drowned in a storm surge of I think Irma which really opened my eyes to how deadly they can be. Before that I always just focused on the wind aspect.

I'm glad to hear that your family has survived the deluge. I thought about them several times when listening to the news. The pictures from Ft. Myers are awful.
Meatball looks a lot like the dog I grew up with in Illinois. Ours was called Christine or Chrissy mostly. She was a sweetheart.

The more things stay the same indeed-with books, with people's intransigence about evacuating (I still remember Harry Truman from Mt St Helens) and with hurricanes that come every year. This one was particularly big though--and might not (or won't?) be the only one. I love that name, Meatball!

Glad to hear your family is safe. So much devastation to try to recover from. I'm sure your upcoming visit will be eye-opening.

Meatball looks like a good dog! We had a Mabel, too, but she was a big dog.

So good to know your family did well through the storm. I feel for those in areas that were devastated. The problems continue long after the media has moved on to the next tragedy.

Glad to hear your family are ok

Meatball is a wonderful name for a bulldog

So glad to read today of the news of Olga yesterday. No wonder she started perking up as soon as she started antibiotics!

So glad that your Florida family is safe. Life on the Florida coast is inherently precarious.

Unbelievable damage done by these storms. I'm happy that your family is safe.

I'm glad your family is all safe and sound. I can't imagine why people would rebuild on Sanibel Island. It seems far to unprotected for any future storms which might even be worse.

Mitchell: That's a good point. They probably couldn't swim very effectively with those stubby legs, could they?!

Michael: Yeah, I'm sure these storms are on your radar now that you have that beach place.

Bob: Good! You're far enough inland that I can't imagine you'd have too much trouble.

Boud: Yes, the Florida coast is always getting shifted. So many cities are paying tons of money to "renourish" their beaches with dredged sand, and it's all so ridiculously futile. This is nature.

Ms Moon: I can see how this storm would affect you deeply, having almost been in its path. For me it's an abstract event far away, albeit affecting people I love.

Jeanie: I imagine the entire island is pretty much flattened. Sounds like it was basically under water.

Colette: Yeah, I suspect so, but you never know. Hurricane damage is so unpredictable.

Robin: I don't know that song! And I love CSN&Y!

Ed: I didn't know that many people stayed on Sanibel! Holy cow.

Margaret: It was a huge storm -- three times the size of Charley, which I remember hitting that area in 2004.

Wilma: I just hope we don't have any storms when I'm there!

Kelly: Oh yeah, they'll be years recovering from this storm.

John: Isn't it? My dad gets the credit for that one. LOL

Chris: It explains a lot about Olga's quick recovery, doesn't it?!

Red: Yeah, this will be a history-making storm.

Pixie: It will be interesting to see who rebuilds and how. I agree -- I think those barrier islands should basically be wildlife refuges with people visiting but not living there. Of course, that cat is out of the bag, isn't it?!