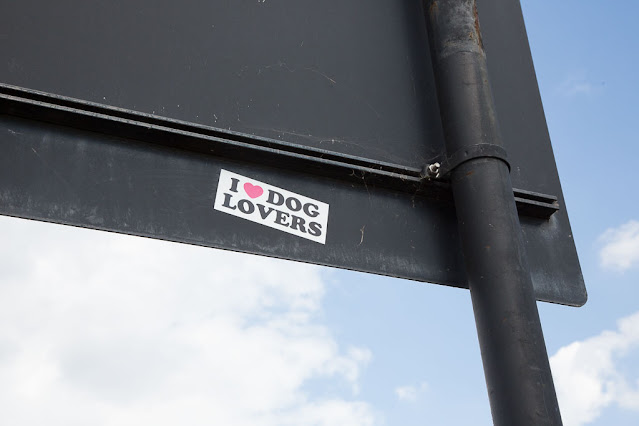 As I'm walking around town, I try to notice all the little stickers and messages that have been plastered to various signposts, street lamps and other street furniture. Stickers are an interesting barometer of public opinion, reflecting a mix of the political and cultural, the artistic and commercial. Some are joyful, some are absurd, some blatantly promotional, some laden with toxic or conspiratorial thinking. 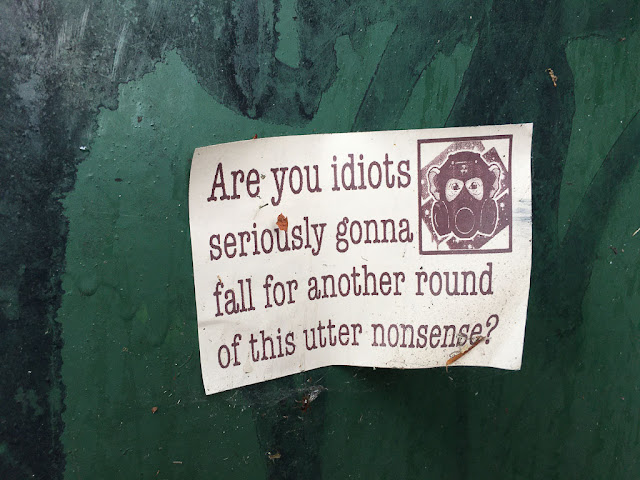 OK, fine, you're an anti-masker. But do you have to call me names? 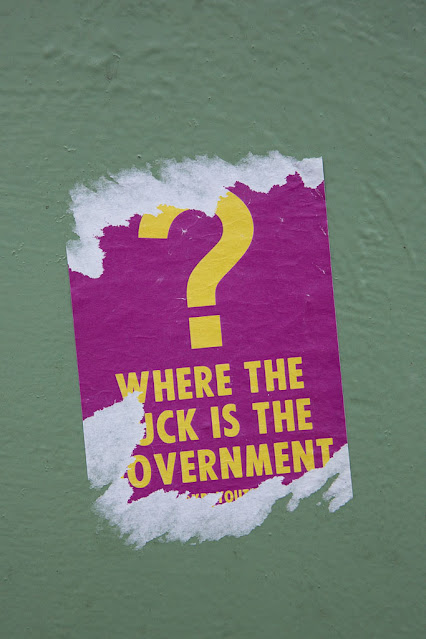 This is an Extinction Rebellion sticker protesting climate crisis inaction. 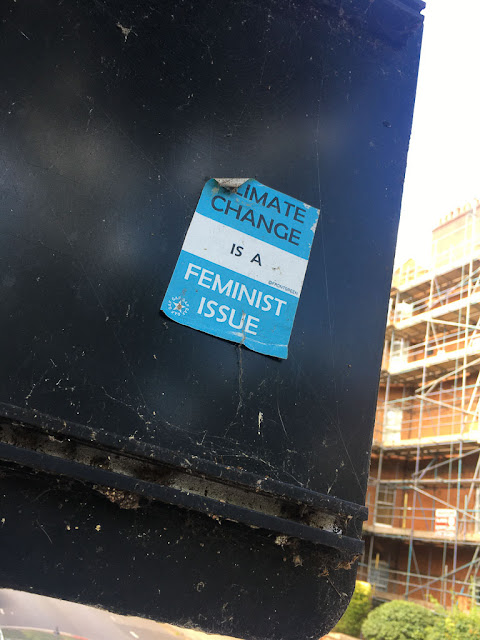 Here's another one with a focus on climate, from a green anticapitalist group. 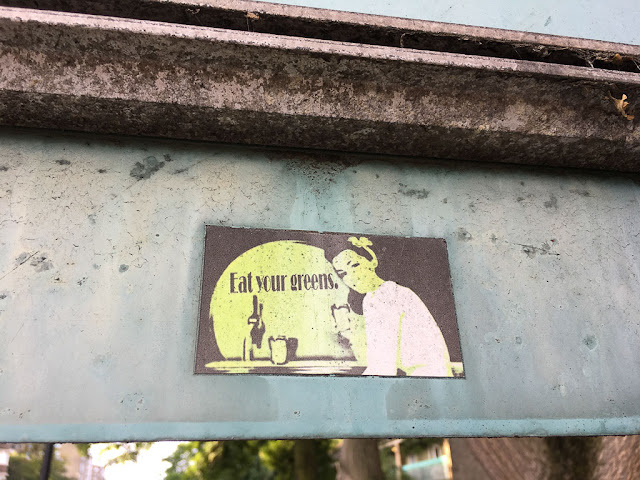 Speaking of greens, here's a woman who appears to be sitting at a bar telling us to eat them. I'm not sure what this is about, unless it's an ad for this beer. 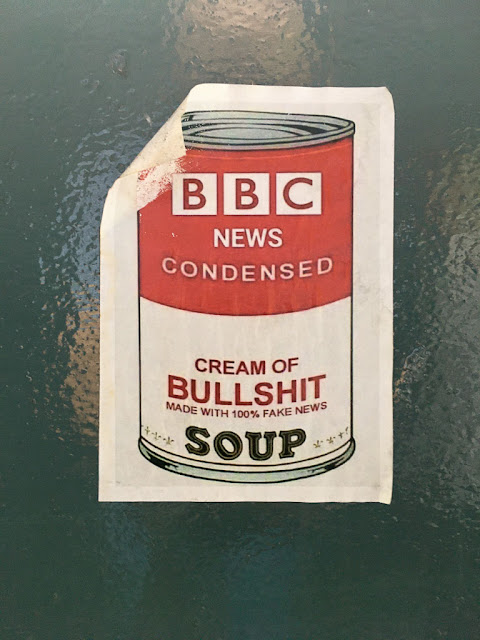 I tend to like the BBC, but some people -- could be on the left or the right -- clearly disagree with me. 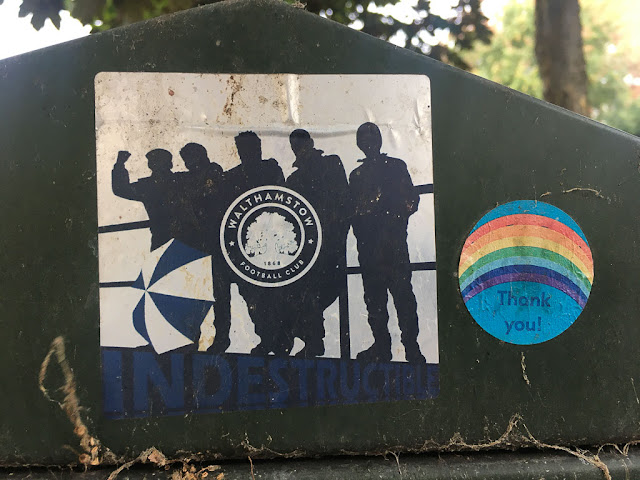 Of course the football clubs have stickers -- in this case touting "indestructible" Walthamstow. Looks like it's been there for a while. 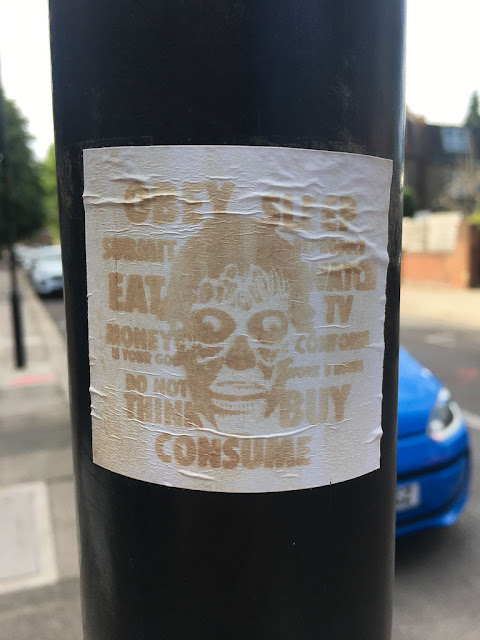 I'd say this is rather reductive. 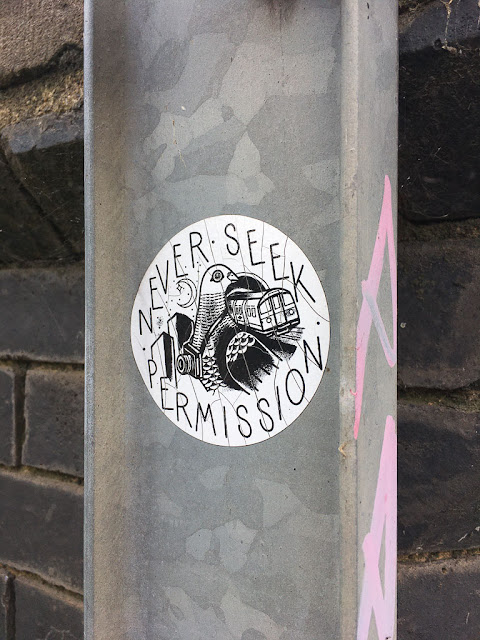 This appears to be a promotion for someone's Tumblr. They seem quite focused on pigeon photography and urban subjects in general. The sticker design is pretty cool. 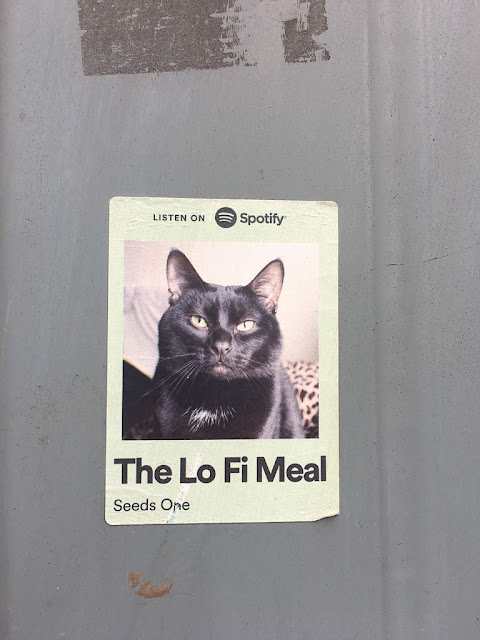 And finally, this cat has been popping up on signposts lately. Apparently this is a band. The music is a little intense. Cute cat, though.

An interesting collection.
Better stickered than shouted at!

Stickers, although sometimes entertaining, make me a little crazy (crooked, in places they “should not be,” marring surfaces). As for the anti-maskers’ sticker, that’s insulting to smart people who knew it wasn’t utter nonsense, and insulting to those of us who wore masks, to idiots in general, and especially to chimps.

One thing about these stickers is that somebody has to be driven enough to design them, pay for their printing and affix them in numerous odd locations. I wonder if they ever stop to wonder who might see them and how they might be affected. To me they just contribute to urban scruffiness. Maybe I should get my own stickers made and put them around: "STOP THE STICKERS!"

I do like the "Never Seek Permission" sticker best. Both for the artwork, and for the outrageous message.

The anti-maskers will never understand.
Climate Change is a feminist issue? A reference to Mother Earth? It made me think of Herschel Walker, running for office in Georgia, who said inflation affects women mostly because they buy the groceries.
Sigh.

I agree with YP. They are really litter.

I think they're rather trashy. Put them on your car or a window where you live or perhaps your backpack- own them. Don't just litter the city with them.

I enjoyed these. They are only slightly different than the ones I see here. I love dog-lovers too! The BBC one is very clever and completely wrong.

Another form of street art or guerilla marketing.

A fine collection of random stickers there. The Cream of Bullshit Soup is my favorite. I just wish it would have said FOX NEWS. LOL!

I don't like stickers because they're almost impossible to get off and as Mitchell said, they're often crooked:)

You have a sharp eye for spotting stickers, Steve.
When you mentioned "intense" music it reminded me of my second son who plays punk music, so loud and rude and noisy. It is ironic that his 2 teenage kids are wild about Kpop! I just smile as he smirks. Each generation finds their own style of music. :)

Where I live there doesn't seem to be scope for sticker putters. I never see them, except on the car of an acquaintance which is covered in them, like his personal manifesto.
I have a bumper sticker about Khasoggi on my fridge, and one taped inside my storm door about voting. That's it. My car is virgin sticker territory.

Interesting variety of stickers and points of view. That looks like my cat!!

I've just wasted far more time than I should have listening to song after song by Seeds One. In some ways, it reminds me of the early 80s. I find it both annoying (repetitive) and oddly entertaining.

I can always count on you finding something fascinating to post about. :)

The soup sticker is my favourite

GZ: That's true, although some people apparently don't appreciate being hectored by stickers anymore than in "real life."

Mitchell: They ARE always crooked! Why is that?! Maybe people are more likely to notice a crooked sticker? LOL @ "chimps."

Ms Moon: Yeah, it's funny -- with bumper stickers, owning them is part of the fun, right? Whereas here they're all just anonymous.

Sharon: I'm sure the BBC one is probably generated by some Rupert Murdoch zombie.

Ellen: Definitely. I like the obvious marketing ones less than the ones with political or artistic messages.

Robin: That's definitely what it SHOULD have said!

Pixie: I think in these public situations no one ever tries to remove them. They just linger until they become unreadable through natural deterioration.

Ellen D: That IS funny! I never "got" punk at all, even though I was young during the punk movement. I was just never that angry.

Boud: It's definitely a big-city phenomenon, as opposed to a suburban one. I used to have a lot of bumper stickers on my car in college, but nowadays I believe I am completely sticker-free.

Margaret: Your cat is famous! And selling records!

Kelly: Wow! I only got through one song! I'm impressed at your tenacity. :)

Jim: Well, "fascinating" may be an overstatement, but I try to keep my eyes open. :)

John: I liked that one too, even though I disagree with its message!

Very interesting post and got me to thinking. I never see stickers stuck to anything around here. I'm wondering if this is simply a British thing or I'm just not that observant.