A Hole in the Wall 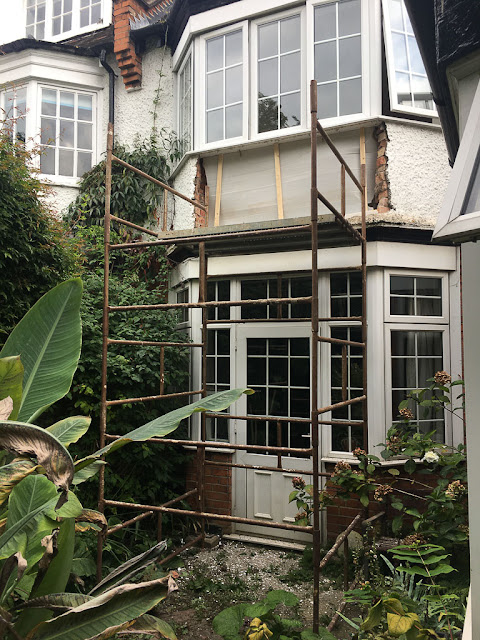 This is what our patio looks like at the moment. I came home from work yesterday to find that flimsy-looking scaffold and a big chunk of the upstairs wall missing! Now, when the Russians said they were replacing a window, I assumed they meant with a window of the same size -- but that apparently isn't the case. They seem to be going with something bigger, like a French door. Which is weird, because they have nothing for a door to open onto. There's no balcony. 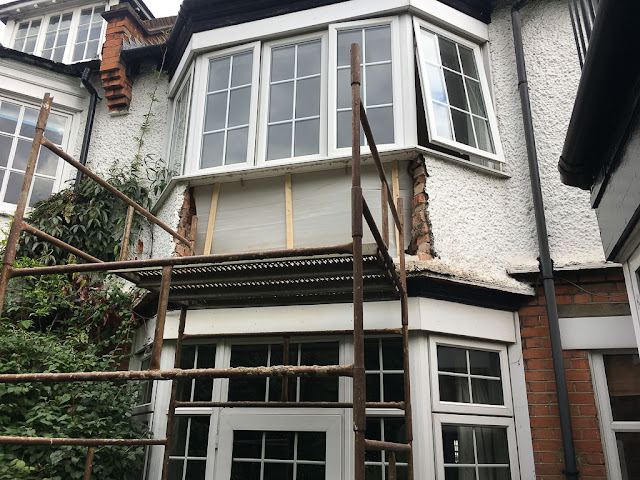 I sent these photos to our landlords and said, "Ummmm...just an informational e-mail to let you know THIS is going on." The landlords wrote back that they knew about -- and in fact are helping to pay for -- the pending roof repairs but didn't realize this wall would be removed. (The Russians own their flat, so I guess they're under no obligation to inform our landlords, but this certainly could affect the downstairs property too.)

The landlords expressed concern about our privacy on the patio with longer windows. I said that wasn't such a concern -- I was more worried about the wall removal causing leaks or damage to our bedroom ceiling.

So, anyway, that's where we stand. Who knows what the heck is going on.

Oh, and I haven't seen any of the workers, so I can't report on the presence or absence of hunky scaffold man. But looking at that scaffold, I'd guess we're dealing with different people. 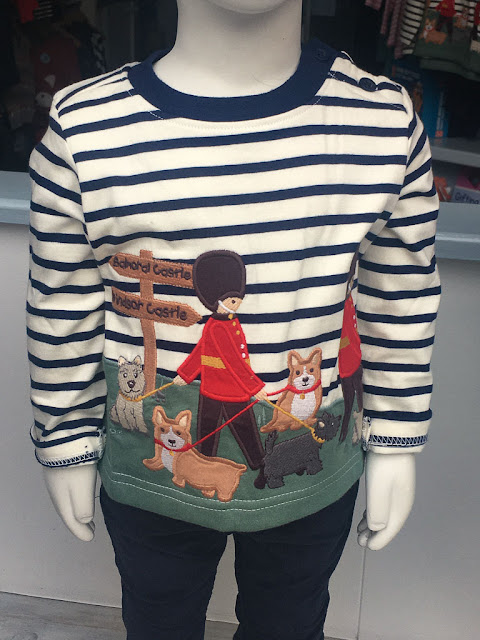 On a lighter note, here's a shirt on a mannequin at a kids' clothing store on the high street. A couple of royal guards walking the Queen's corgis, with street signs for Windsor Castle and Balmoral Castle in the background! I love it and I'd buy one myself if they carried my size. I'm assuming they ordered them long before the recent news, and now there's a little tinge of sadness in the image, but I guess the Corgis are still around and must surely still be walked.

Meanwhile, the news from the USA included the craziest "Florida Man" story I think I've ever read. A guy gets lost in a swamp, an alligator EATS HIS ARM, and he stumbles around for a couple of days (!!!) before being rescued. The whole thing sounds frankly unbelievable, but apparently it happened.
Posted by Steve Reed at 7:54 AM

The Russians must be going to have a " Juliet balcony" . Hope that it doesn't affect you in any way.

We expect you to make an effort to see scaffolding men workers, and photograph them at their tasks. Up to you if scaffolding photos are worth taking. Personal taste, no doubt.

The Russians' window looks quite good as it is.

The tee shirt looks very good. I heard Prince Andrew is taking on the corgis, so it will be him walking them in the streets. No?

If I lived in the flat underneath, I would be concerned too!

I couldn't read the NYT version due to the paywall but I read the USA Today version. To me, it sounded like drugs may have been an issue. How does someone get lost swimming?

That kids' shirt is so cute! I do hope the Queens beloved pooches are getting lots of pats and attention and walks.

That certainly is just about the epiphany of a Florida Man story. If meth was involved, it would be. I live here and I hadn't heard that story.
Is it time for you guys to find a new apartment? I know you don't want to but this is ridiculous. I don't think those people are going to stop at anything until they've replaced the entire upper story.
I had read a while back that the queen was not getting any more dogs. I remember because it made me sad.

Oh, I believe that story because, well, Florida!

That is an interesting shot of your building. It looks like it is very tall with rooms up in the attic? The Russian's home has 2 stories?
We will all be watching to see where these repairs are going...

Interesting construction going on at your neighbors. I wonder if it might be time for you and Dave to find someplace to live. Your neighbors are strangely thoughtless and not really very neighborly at all.
Cute tee-shirt!

It says the the Florida man has been reborn as a motivational speaker. His words of wisdom so far, as quoted: He said: "Do not feed the gators alright and you guys know who you are, throwing rocks at them and stuff, I've seen it on the job sites, leave them gators alone."

All joking aside, I'd be worried that the Russians are planning a balcony or something, which will be an encroachment on your garden space. Russians have been in the news lately for their encroachment on their neighbor's property. You may have heard.

The Russians must have a fair bit of money, or a fair bit of debt, and should have let you and your landlord know what's going on. I love that shirt.

That window business would have me worried too.
The shirt is great. I remember seeing a display of children's clothes similar to this in a little shop near Buckingham Palace.
That Florida man story is....well...crazy!

I think they may be planning on building a balcony, which will not only strain the load bearing walls, but cast a lot of shade on your patio and rooms. Are there bylaws about this?

I'd be making a lot of noise about it, too.

Whoa - that must have been alarming to come home to! I hope it's just bigger windows & not a whole balcony situation.

I love that shirt. I also heard that Andrew was taking the corgis (and that Fergi still lives in the same house?). So I think they'll be fine. Maybe. Hopefully Beatrice & Eugenie (spelling of both names?) will take over their care!

That's quite a mess outside your door. I hope they finish soon. I love that swearshirt! Enjoy your day, hugs, Edna B.

I think what you said about the Hunky Scaffold Man is what threw me off. He looked so well-groomed! (not that construction workers can't be well-groomed, but you know what I mean)

I don't think I have to tell you to keep a close eye on those renovations....

It looks like they're mucking around with the actual structure of the building which would make me extremely nervous. The Florida Man story--ugh.

That scaffolding looks like it is blocking your access to the garden. How can you possibly climb over and around it? And how long will it be around...knowing some workers, it could be a long, long time. Elevenses, you know. The possibilities of what the Russians may or may not be doing upstairs is a bit scary. Adding a balcony would be a step (and overhang) too far.

Ugh! The upstairs folks! Always something...I have been looking at Chiswick again, dreaming...
Olga soon will not need to romp in the expanse of land, the heath- your options to move are probably only limited to expense and the usual availability of rentals.
Who knows what is going to become of London, Needing a fortune teller.

LOVE the corgi shirt. I wish it was in adult sizes, too!

Maybe there was wood rot (if it's wood) under the window and it had to be replaced. I certainly would be concerned about it. At least they can't build a balcony there! I'm glad you notified the landlord. It's probably different from condos here where you are responsible for everything inside but not the outside. (Like siding.) At least I think that's how it goes. All I know is they don't have to mow their own lawns or repair the roofs!

Florida Man story is extraordinary, but there are a lot of wild stories coming out of the USA lately.

I sure hope the upstairs neighbors aren’t planning an invasion — of the downstairs. I’m sure there’s a perfect explanation...

There is something sad and touching about that great shirt.

I saw a video of Florida Man talking about his adventure and wondered how you survive getting your arm bitten off and wandering around for two days afterward. He's a lucky man. Well, if you don't count the missing arm.

It would drive me insane to have an upstairs neighbour doing unknown stuff to their living quarters that could affect me. Could you talk to them with neighbourly interest to see what's up? That's what we do here even when our neighbours own their own home which is sitting on their own property. Sometimes (like this spring with my neighbours) they'll even tell you ahead that they're having work done if it's likely to interfere with your enjoyment of your own property. Maybe that's the exception, though - a perk of living in a small town. Good luck!

The window job looks like a recipe for problems late on.

It looks to me like a balcony will be built there as well as french doors. I hope all joints are going to be properly weather sealed. You won't have much privacy and maybe less light through your windows.