Wave to the Nice Man 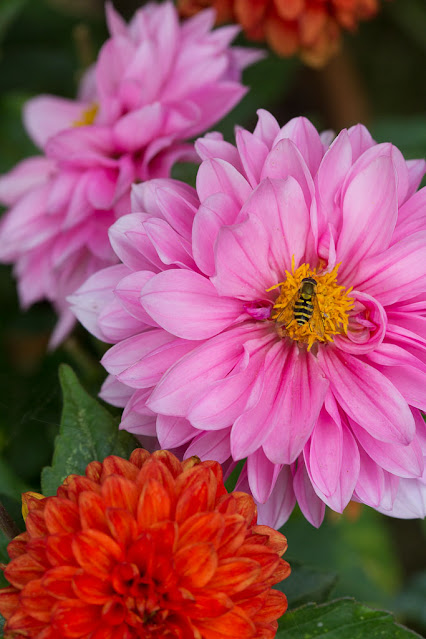 Lots of domestic chores yesterday -- plant watering, vacuuming, laundry. I guess that's what Saturday is for, right? Tidying up from the previous week. I also deadheaded our dahlias, which although fading still look pretty darn good.

We did NOT get our tickets bought for Christmas in Florida. Dave was plugged into his laptop watching reruns of "The West Wing" and then he took a long nap, so he was basically unavailable for much of the day, and I'd like us to buy them together so we can be sure we're both happy with the travel dates and that kind of thing. We'll do it today.

Olga's mysterious nose swelling came back again. We first noticed it in December and then it recurred in February, when we treated it with antibiotics. On Friday night we saw that it had returned -- she looked like she was turning into a bull terrier -- but today, once again, it appears back to normal. Whatever's going on, she doesn't seem bothered by it at all. She's eating and chewing normally and her energy levels seem fine. This time we did notice a visible sore of some kind, like a canker, right where her cheek meets her gum. I tried to call the vet but our vet's office is now closed on Saturdays (grrrr) so I'll have to wait until Monday. I suppose we really ought to get her x-rayed -- we put it off when the swelling seemed to go down the last time, but enough is enough. 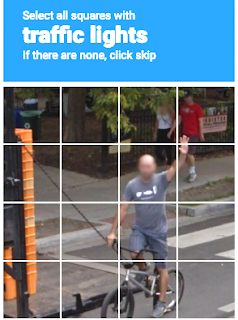 I came across this  the other day while reading blogs. You know those Google security tests that want you to click all the bridges or mountains or crosswalks? This one popped up on someone's blog and I got a kick out of it. Wave to the nice man!

Last night Dave and I went out to a fancy sushi restaurant in Belgravia, called Sachi at Pantechnicon. A mouthful of a name, right? It's one of several businesses in a multistory building with a columned facade called Pantechnicon, which turns out to be the location of a former department store. Apparently it reopened in its current guise about five years ago, and it's quite swank. I'd like to go back and look around more. I rarely get to Belgravia, a very posh area between Buckingham Palace and Knightsbridge.

Anyway, we had a variety of sushi and grilled bits of skewered meat, pork and quail, and we even had a sake sommelier, who chose three different sake varieties for our various courses. One of them was a "red" sake, made with red rice, which I didn't know was a thing. I also had a martini made with Japanese gin. It was definitely an unusual dining experience.

I feel like I need to write something here so I have a line of text between the image above and the image below, but I have nothing more to say, so here you go -- a line of text.

The Pantechnicon sounds like a name for a playhouse/theatre. Perhaps a cabaret style place with dinner and a show.

Welcome to my world. Busy watching something or napping. I have to make an appointment to make travel bookings.
Wave to the nice man! I thought you might have been trying a street pick up.
Your line of text really gave the post a lift. Is that the Sachi who is associated with the restaurant?

The Pantechnicon building has an interesting history and was more than just a department store. It was a storage facility for those treasures bought back from overseas travel that just could not be fitted into the house and from it we get our word, the pantechnicon, for a removal lorry. Pantechnicon was the cleverly chosen word for the company by its owners and their wagons had the name on the side and it was eventually taken as the word to be used for the vehicles that transport furniture etc. which we still use in the transport industry, I am glad you liked your venture to eat there. Some like it, some don't. Breakfast in Norway, supper in Japan so they say.

I waved, but I’m taking you at your word that he’s a nice man.

Is he a nice man? I know his face is blurred but I suspect that that's you on the bicycle. Nice men don't threaten school library book defaulters with an array of medieval tortures.

Growing up, there were no sushi places anywhere which is why I suppose I and others always joked about the type of people who would eat dead fish raw. These days we have sushi restaurants close by, even in rural America with only small towns, and I now understand why people eat dead fish raw because I am one of them. Oh how the times have changed.

I'd love a sake sommelier to help me choose since I am sake deficient.

For some reason, when I read "sake sommelier" I saw "sake commander" which really would be something, wouldn't it?
"You WILL try this sake!"
I hope Olga's okay.

I was just wondering why a building was named for a big furniture truck, then all was explained above, thank you Rachel!

It sounds like a posh night out even though I'm still seeing you both dining in a truck, waiter leaning in from the running board.

Sometimes those domestic chores overwhelm us.

Sorry about Olga's recurring swelling issues. I do hope she gets to see the vet on Monday. Sounds like you and Dave had a lovely evening there. Love seeing that evening photo.

Outdoor dining? Very pink. I vacuumed half the house yesterday. Maybe I'll do the rest today.

Such a beautiful photo of the flowers. I love it. Also, the street scene is great. Lot's of outdoor dining on that street.

Sushi isn't my thing although it's very popular here. I have terrible issues with those captchas and almost always need to do them several times.

Julian Fellowes wrote a book about Bellgravia, which was made into a series. I read the book later, and it was interesting that the series dialog was lifted directly from the book. Anyway, it's an interesting part of London, and it looks good with that lighting.

I wonder if Olga has some sort of mild allergic reaction to certain insect bites?

My mind read the word "snake" instead of "sake"! (not that you'd need a sommelier for snakes)

That restaurant looks like it has spilled out onto the a large part of the pavement. Lovely lighting for a night out to eat. I've never had sushi, the idea makes me shudder.

I read "sake sommelier" as "CAKE sommelier" & I was ready to book a flight. Ha!