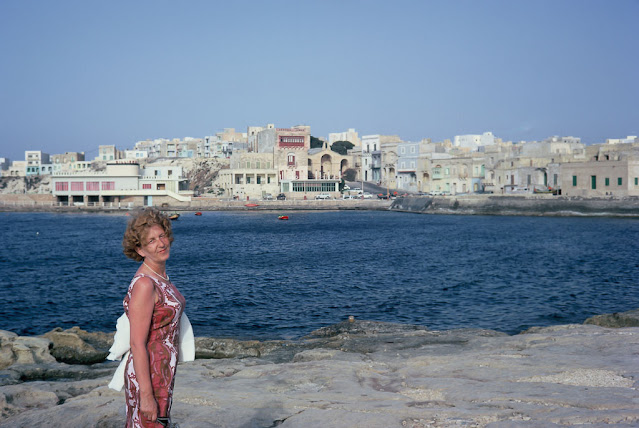 Today we have a third round of selections from my rescued slides, purchased in a junk shop in Greenwich back in July. I have no idea who these people are -- my goal was simply to save some interesting old photos at risk of being lost. In case you missed my earlier slide posts, here are Part 1 and Part 2.

After I had my first batch scanned I went through the slides again and chose these (and a few more) for a second round of scanning. I think I've now scanned just about everything that's any good. You can see them all (plus other rescued photos) in a Flickr album here.

Above is our mystery woman, once again, in 1969. By Googling those buildings on the far shore I was able to determine the photo was taken in St. Paul's Bay, Malta. 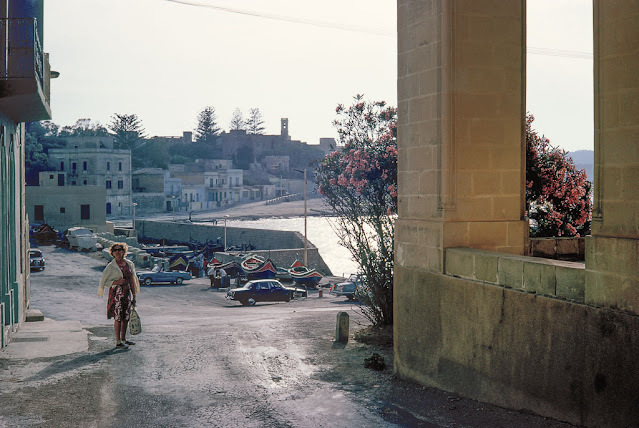 And here she is again, on the same trip and probably on the same day. Click here for roughly the same location on Google Street View in 2016. 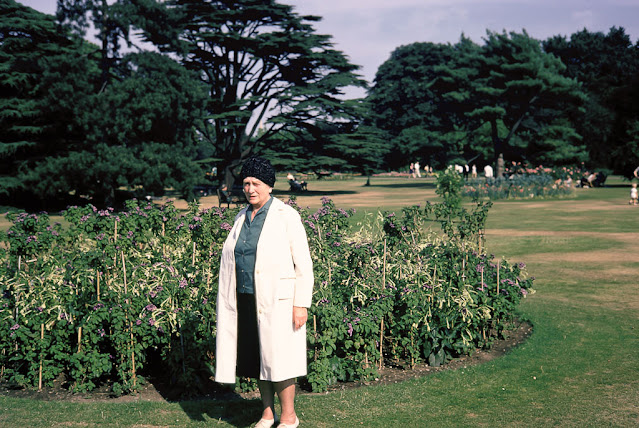 A park portrait from 1969. This woman looks none too happy about being photographed. 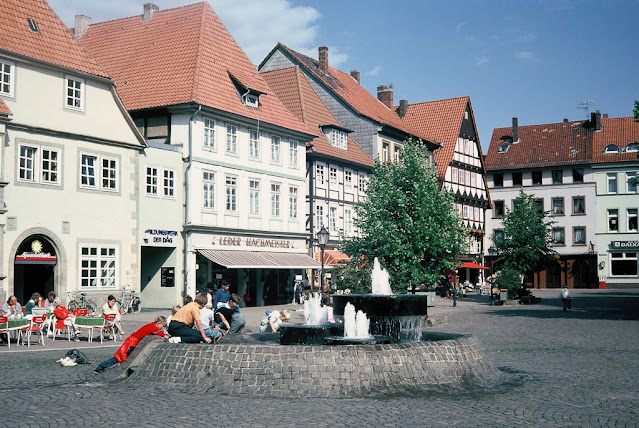 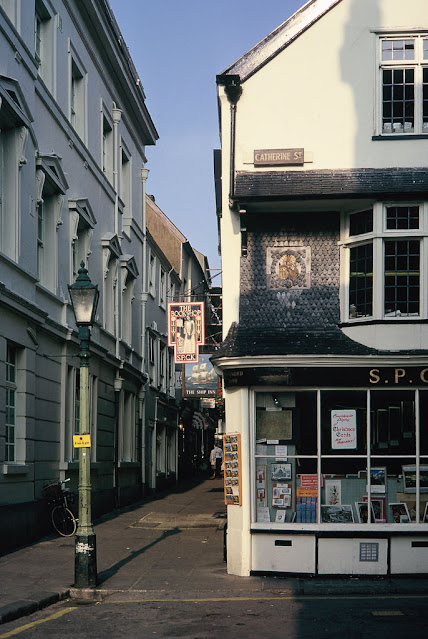 And here's a side street in Exeter, England, in 1972. It shows the bookshop of an organization called the SPCK, or Society for Promoting Christian Knowledge, which is still around, as well as a pub called The Ship Inn. (Hence the artwork of a ship on the side of the building.) Here's the same view in 2018, by which time the bookshop had become a clothing store. 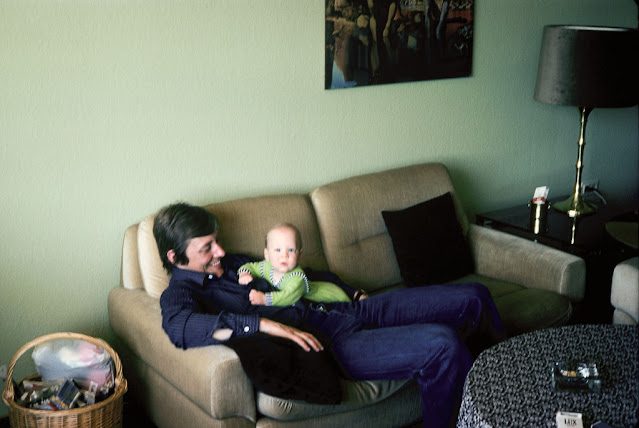 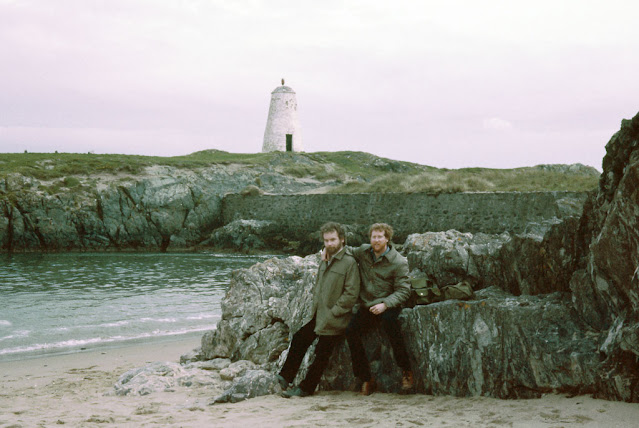 A somewhat grainy image of some guys in front of the Llandwyn lighthouse in Wales, from 1985. The color on this slide is badly deteriorated and I had to do a lot of work to get it to look even this good. 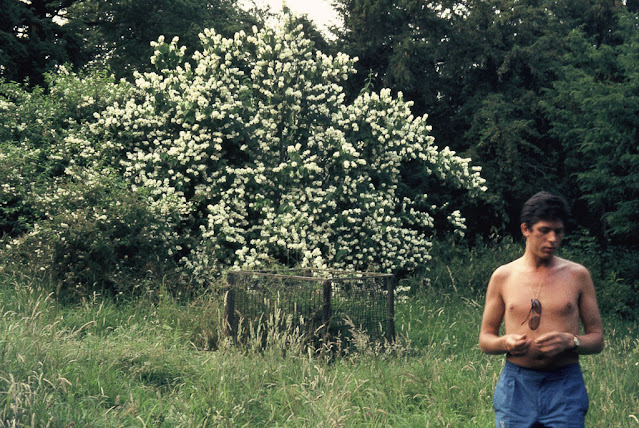 July 1983 -- Did the guy just wander into the picture? Are we photographing the tree or the trash bin? I think this might be the same man who's with the baby in the photo above. 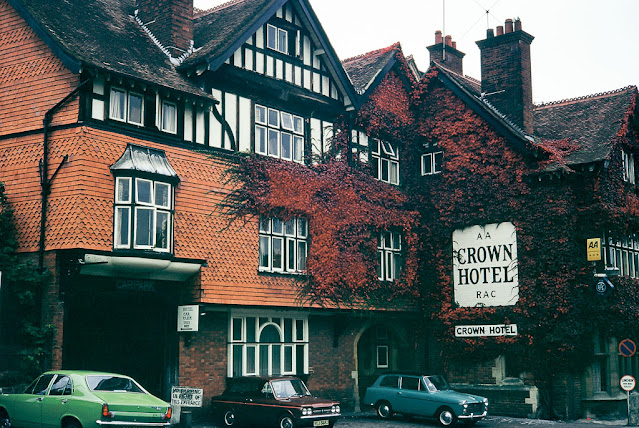 Oct. 1972 -- The Crown Hotel still exists in the town of Lyndhurst. 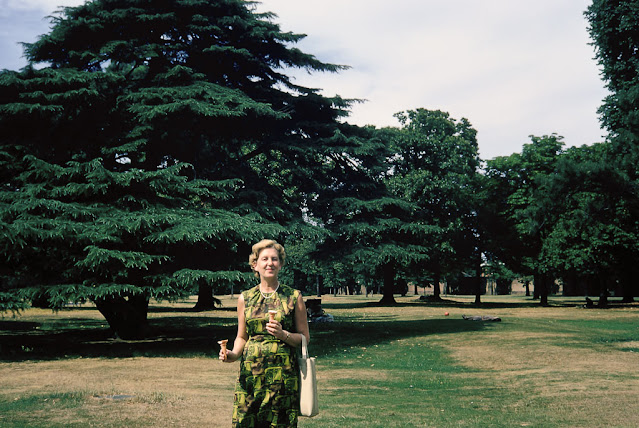 And finally, mystery woman one more time, in 1969, holding a pair of ice cream cones. Isn't that a great dress? She always looks put together. I wish the photographer hadn't cut her legs off, but I guess he was trying to do credit to the big tree.

These are all so much fun. You need to give that woman a name.

It's like snooping, but I want to know who they are. Someone (mystery woman?) must have treasured these slides once. How could anyone just throw them away?

I so enjoy your slide purchases.
The lady featuring in your photos has a fine permanent wave hairstyle.
Baby has a nice enough daddy.
The pair of blokes in Wales seem to be very good friends.
The odd woman out doesn't like British to me.

You have worked hard on this blogpost Steve and I find the slides both fascinating and tormentuous. I want to know how those people's lives progressed. Has the baby already attended his father's funeral? Life is gone almost before it has begun.

I hope someday you discover who these slides belonged too.

I'm enjoying the mystery woman's travels and her flair for fashion !

I love seeing the then and now photos. That baby was born the year between my own Hank and May's births. And they have not buried me yet!

Thanks so much for these. Is that the Hamelin of Pied Piper fame?

It seems so sad that old stuff just gets tossed when people die or end up in a nursing home. All of the memories, just gone. These photos remind me of my own family's photos, maybe that's why they make me sad. I'm glad you've got them, the photos I mean. You remind me of a historian or an archivist.

Such an interesting look back in time, a photo album of strangers and yet they all tell a story.

These are fascinating. I love that you were able to find some of the same locations on Google. I'm amazed that some of those places haven't changed hardly at all.

I love both of the dresses on the mystery lady. They remind me of a Hawaiian dress that my grandparents brought my mother after they'd visited there (probably about the same timeframe as my mystery lady photos). I have it hanging in my closet as if I'll ever fit into it. Ha!

I was thinking maybe the mystery woman was getting tired of posing in that first photo, but she's back in form with the others. I do like that dress in the last one. I'd like to see what shoes she wore with it.

That street in Malta has changed a lot, the other places not at all. (or not much) This reminds me of genealogy--finding old photos of people and wondering about their story.

My parents had box after box of slides. I think family history would have been better served if they had just printed a few photos. After the slide projector died, the slides just sat there for decades.

I want to know what those flowers are staked up behind the woman in the third picture and I wonder if those two guys in front of the lighthouse are twins maybe (or not, hair color is a little different) or boyfriends?

Oh my goodness. I would love to know the backstory!

The older woman in the park looks enough like Mystery woman to be her mother, I think. I like all the old buildings and the colourfully painted boats in the second image.

How interesting! Were the slides labeled or did you just know (or research) locations? o interesting -- they tell stories. I love the lighthouse image. The work you did paid off.

Mitchell: What shall we name her? Perfectly Posed Penelope? Put-together Priscilla?

Tasker: I can't imagine throwing out family photos but some people do it, particularly if they feel no connection to the people or events depicted.

Andrew: I think the turban or hat on the "odd woman out" (as you put it) makes her look foreign, but who knows.

YP: Well, as Ms Moon points out, the father could quite possibly still be around. The baby almost certainly is!

Ed: I kind of like not knowing. It allows us space to wonder.

Bob: I do really like her clothes. You never see her in pajamas or a housecoat.

Colette: I'm glad you're appreciating them, which fulfills my mission!

Ms Moon: Yeah, it really wasn't THAT long ago. The parents could certainly still be alive.

Boud: I assume so!

Pixie: It's sad to lose the memories attached to them, but at least we now have the images themselves.

Robin: I like looking at other peoples' pictures. I find them fascinating.

Sharon: Yes, it's impressive that the Exeter street scene, for example, looks almost the same.

Bug: Sometimes it's worthwhile to save clothes even though we'll never wear them again.

Kelly: I know! It's such a bummer that her legs aren't in the picture.

Margaret: Yeah, I was surprised how much more built-up that waterfront in Malta has become.

Allison: Do you still have them? I have a hand-held slide viewer that uses natural light and it's very handy. I don't even need a projector.

Ellen: I'm thinking the guys are just friends or possibly relatives, but who knows. I think the flowers are nicotiana? But then again the leaves seem too small.

Debby: You gotta wonder how all these wound up in a junk shop.

River: I'm not sure. That older woman doesn't seem to turn up in any of the other slides.

Jeanie: They were only labeled with processing dates (sometimes not even that). I had to resort to Google to figure out locations.