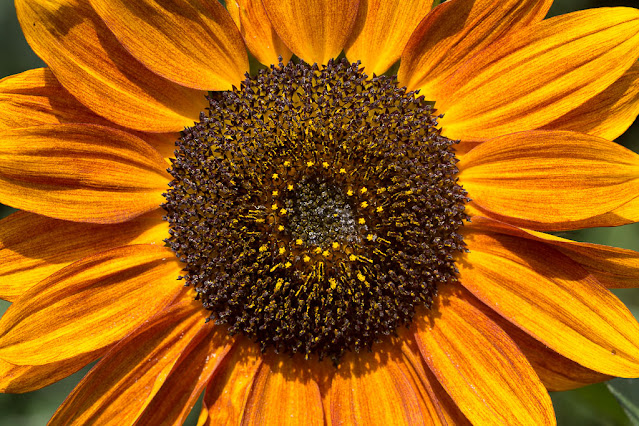 I couldn't resist another sunflower photo. Look at all those little seeds in the center, just waiting to become a meal for hungry birds! I'm glad we have something to feed them in the coming weeks and months. You may remember we took down our bird feeders in the spring after we spotted rodent activity in the yard, and since then I've noticed that the tits and dunnocks that normally populate our garden have moved on. Maybe between the sunflowers, the purple verbena and the teasels, we can bring some birds back to feast on natural seeds.

Dave and I have clashed a bit over the bird feeders, actually. Now that we're starting to move into autumn I'd like to put them back out again, and Dave is dead against it. "We'll get rats," he said. My response is, "This is London. We already HAVE rats."

Besides, I really think the rat activity we saw in the spring came more from Mrs. K's compost bin than from our bird feeders, and she's removed it. I told him I'm happy to give up the suet feeder, which is the messiest. I put one peanut feeder back out, and I may put up a seed feeder too. I'm not sure what to do with all the suet balls we have. 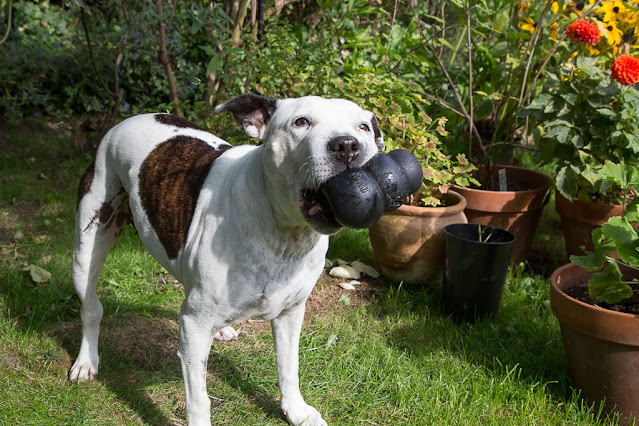 Thanks for all your good wishes on yesterday's post. This is what greeted me when I came home at lunch yesterday to check on Olga. You can see her snout is still a bit swollen from the surgery, but it should shrink over time. She's back to her playful self and still toting around her Kong. In fact she insisted I throw it for her. 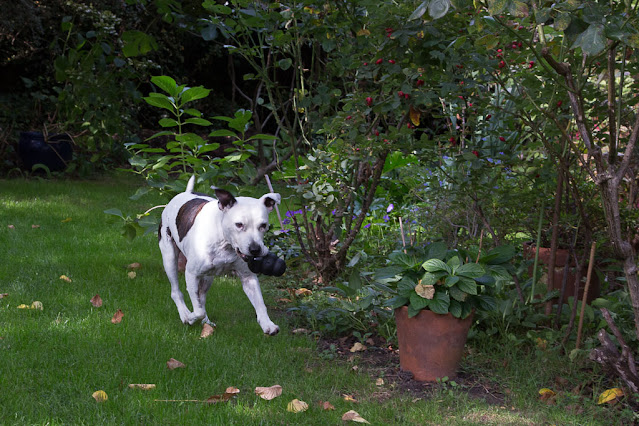 She's a machine! So much so that I told her dog walker to pick her up today as usual. I simply asked him to keep her from chewing anything hard, like sticks, and transport her in her own crate rather than putting her with other dogs. (She usually gets driven in a van to the Heath, where she walks. That's why she's in a crate part of the time.)

I think the sooner she gets back to her routines, the better. Meanwhile she's on an antibiotic and a pain reliever, and though the vet gave us three cans of special easily-digestible food, she doesn't seem to need it. We've been giving her normal food too and it doesn't bother her. The only thing we have temporarily discontinued is Dentastix -- they're just too hard for her newly-sutured mouth. Dave will take her back to the vet this afternoon for a checkup, and I'm sure she will go enthusiastically because the vet has treats!

Oh, and I got my seasonal Covid booster yesterday. This was a total spur-of-the-moment thing. I just learned there's a walk-in vaccination centre on Mill Lane, near our flat. I was thinking my last booster was about a year ago (it was actually in early November, but whatever) so I seemed to be due for another, and I wanted to get one before my trip to Florida to see my mom early next month. So I showed up at the vaccination centre and although walking in didn't seem as easy as one would expect (lots of people had appointments and they rightfully got priority) I did eventually get a shot. So that's out of the way.

I got Moderna. My last booster was Pfizer, and my original vaccines were AstraZeneca. I'm a veritable stew of Covid antibodies!
Posted by Steve Reed at 7:02 AM

What a tough dog Olga is! No moaning, just getting on with life. I like that. You could use the suet balls to practise your juggling skills or make a nice suet ball goulash with unripened banana and egg yolks.

I've had all three varieties too, with the last one being mid May, so I should be okay for a while.
I'm very happy to see Olga running around with her kong.

Good to see that Olga has bounced back.

I hope to hear soon that we can get our second boosters.

I never expected Olga to be so playful so quickly. What a trooper.

Suet I am sure would appeal to rats. Seed not so much unless they were really hungry. Maybe I am wrong about that. Just guessing really.

My vaccines were the same as yours in the same order.

What really griped me was on my last booster, I called ahead to make an appointment and was told it was unnecessary because I could just walk in. When I got there, I was forced to wait 45 minutes due to all those who had appointments ahead of me.

Since this shot came available a couple weeks too late, just as it was the first time too, I must now wait until the first of the year before I'm allowed to take the booster. But at least I should be immune until then.

Good to see Olga up and about again!

We are officially banned from seed feeders because of vermin, but I continue with suet feeding. Fewer birds anyway this year, changing seasons may have moved them to different regions. My neighbors have seed feeders going, mainly feeding squirrels.

I love that sunflower picture - they are guaranteed to give me a boost when I see one.

I really need to get my seasonal booster. I'm eligible now - I've just been slack. I think it's because Mike got his booster and his first shingles vaccine at the same time and & need to do the same, but he said the shingles vaccine was very painful and I am a whiny baby. So we'll see.

All of my shots have been Moderna and I got my flu and booster shots on the 11th of September! The booster did make my arm a bit sore for about 3 or 4 days!
Olga is just happy and beautiful!

Glad you got your booster. I have to do that soon and get my flu shot too...
Happy to see Olga feeling better so quickly.
I wonder if you can put out your suet somewhere else - like the cemetery or one of the parks you walk at? At least it wouldn't go to waste then...

So glad to see Olga doing well there. Yay for her energy and her enthusiasm for everything.
I've started thinking about getting another booster shot, the one that's for the latest variant. I saw an article in one of the big newspapers (NYT or WaPo) about only 4.4 million boosters have been given for that variant. That does not bode well for winter.

It's good to see Olga all happy and playful. She has responded to oral surgery much better than I would.
I still need to get my updated booster shot. I'll try to get an appointment this weekend. I did get my new flu shot two weeks ago.
Can you take a few suet balls to the cemetery and scatter them around?

Good that you got the new booster before traveling to see your mother. I got a second booster not quite three months ago, so I think it's recommended I wait another month or two for the new and improved one. I do need to go get my flu shot, though...

I love seeing Olga with her Kong. They're such great toys and she's such a great girlie! 😃

Good to hear that Olga is back to normal. Yes bird feeders can attract pests.

I'm so happy to see Olga bouncing back so fast! That's great :)

I went ahead with my shot and I'm glad to have done it. Hopefully I can cope with my mom here for the next 24 hours or so.

I loved having a bird feeder but it brought squirrels and deer closer to the house than I wanted to have them. We are asked by town authorities not to keep them up in the spring and summer because of bird respiratory diseases that are common here. So for now, I reluctantly do not feed the birds. (And yet I have seen even more wildlife - a raccoon and a chipmunk just recently!) I like the idea from a couple of commenters of taking the suet balls to the cemetery or similar spot.

I'm happy to see Olga looking so frisky! She's got such a great personality. I had 3 Pfizers and 1 Moderna and for my next shot, ?. I'm looking at mid-October so I'll be at prime immunity for the holidays and my new grandson, arriving in early December.

Well done, Olga! This is a joy to read, Steve. And I'm on your side with the feeders and Mrs. K's compost pile and the rodents. Can you hang the feeders in a far part of your yard? I think you'll be fine, especially in the winter. Good luck!

River: I'm happy to see it too. She seems to feel pretty good, all things considered.

Mitchell: I didn't even get a notification. I just went.

Andrew: I think rats will eat just about anything, but I do think the suet attracts them more.

Ed: Argh! I kind of felt the same way when I went to the "walk-in" vaccination center and found everyone else had an appointment! WTH?

Boud: Interesting that they allow suet but not seeds.

Ms Moon: It's true. We joke that Olga doesn't have any nerve endings. She just doesn't appear to feel pain.

Bug: I've heard that about the shingles vaccine. That's not one I've had to take yet. (I think they start at 60 here.)

Marcia: I felt kind of yucky yesterday, with mild arm pain, but those were my only side-effects.

Ellen D: I wonder! Would someone steal the bird feeder if I do that?

Robin: Yeah, I don't know whether my booster is specifically geared for the new variants or not. I assume so, given that it's what the NHS is providing at this point.

Sharon: I think if I scattered them they would be promptly eaten by foxes! (And maybe that's ok.)

Kelly: Our school usually provides us with a flu shot but I haven't heard anything yet this year.

Red: I sure do miss the birds, though!

Jenny-O: Interesting about the bird diseases! I've heard that too though as far as I know there's no similar recommendation here.

Jeanie: I may try it. The problem is, I want them where I can see them from the house!

I got my bivalent booster two weeks ago too. Unlike you, I'm a faithful moderns girl all the way.