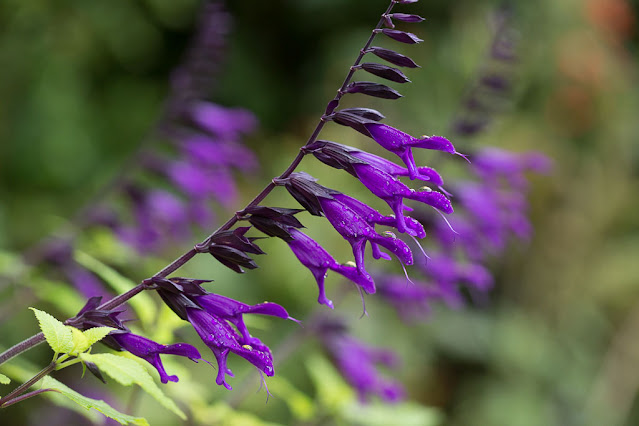 Some of the garden flowers have faded, but the Amistad sage is still blooming away. That plant is always a crowd-pleaser. Too bad it's not hardy -- I'd like to plant it but it needs protection in the winter so we keep it in a pot and shuffle it into the shed (or the living room) during frosts.

Then again, that's the advantage to potted plants -- they can be moved around, as we've been reminded the last few days. We cleared the patio for the upstairs neighbors' roof work (which actually begins today, not yesterday, as I wrote earlier). I also tied back a big buddleia that overhangs the patio and did some other things to minimize plant damage. I had to unlock the side gate first thing this morning, which entailed blundering into a giant spider web between the house and the fence before I'd even had my coffee.

The workmen will soon arrive to begin setting up their scaffold. I wonder if hunky scaffold man will be back? 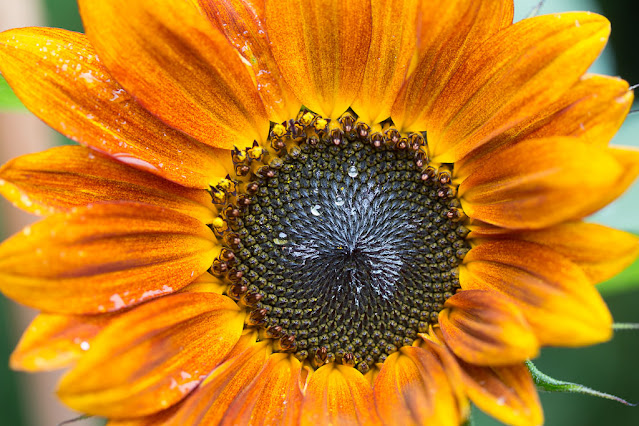 As you can see, there's moisture on these flowers. Yes, we've had more rain! A fair amount of it, actually. As far as I know our hosepipe ban is still in effect, but we haven't had to use the hose (or water at all, really) because nature is doing it for us. In fact I have to mow the lawn again. That's another sunflower above -- we have three blooming now. 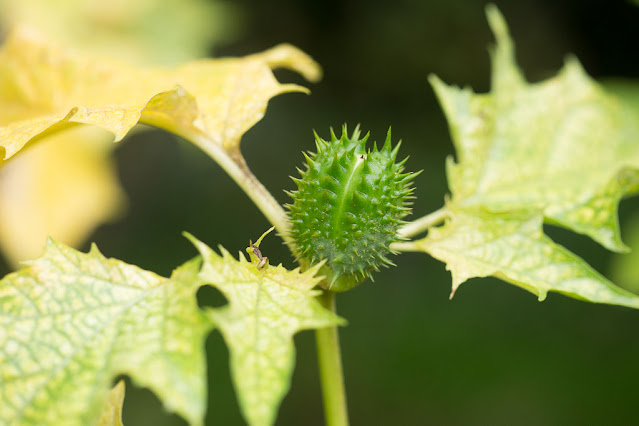 The daturas have produced lots of spiny seed pods -- "thorn apple" is one of the plant's common names. When the pods open I may harvest some seeds, though I'm not sure I'm going to grow them again. They're mildly interesting but the flowers don't last long and I certainly don't need as many as I accidentally grew this summer.

I think we've ironed out Olga's care over the holidays. It's going to cost us an arm and a leg, but we found a dog-sitting service with an opening. (I'm sure there was an opening because it costs an arm and a leg.) Basically someone will come and live in the house with Olga for the two weeks that we're gone. It seems kind of extreme but it's nice to know that her routines will stay the same and I like having a single person for the entire time we're away -- rather than trying to shuttle keys between multiple people. None of our friends could do it the whole time because, of course, they're going to be traveling just like we are.

The cost is stressing me out, but sometimes you just have to pay to get things done. As I've said before, between this, Olga's dental surgery, my October plane fare to Florida and both of our Christmas trips, and our tree maintenance (which the landlord is partly paying) it's an expensive fall. I hope my step-sister's car will be available for us to borrow in Florida, because renting a car on top of all that would pretty much break the bank. Fortunately the school will reimburse most of our Christmas airfare through its "home leave" program for employees -- but that won't happen until afterwards.

Good to hear that you have got Olga's care sorted out.

That home leave benefit is certainly a plus! Too bad there’s no “Oh my god, i have too many expenses all at once give me cash now” benefit. But so glad you got Olga worked out. House-sitters are the best for pets if you can manage it. But, oh the car rental!

Home leave? Is it an American school? Interesting concept.

I'm glad you got Olga's care set up. But can't see why the landlord isn't paying for all the tree work. It's improving their property, after all.

Yes, this is all adding up fast.

I wonder how long the scaffolding will be up? Scaffolding is always up longer than you think. My guess is till Easter 2024. It's the traditional Russian way of saying "Thank you for watering our plants!"

Outstanding Sacrifice There Brother - Now Get Out There And Enjoy Yourself

Paying people to come in and live to look after pets and plants is not unusual here and mostly not done by any agency but word of mouth and perhaps online ads. It is cheap because the dog sitter is receiving accommodation, use of a car perhaps, and comfort.

In every sense of the words: when it rains, it pours!

Ooh boy. Yep. That is a lot of expense. But like you said- it's only money. And Olga will be so happy to be in her own home.
Glad you're getting rain. That's something money can't buy.

I love that you are getting some rain there and don't have to water. That's the best news. It is interesting as another commenter mentioned that the landlords don't pay for the tree work. Great news that you found in-home care for Olga. Yay!

Glad to hear you found a good dog sitting service for while you are gone. Those purple flowers are great and the sunflower is a beauty.
I watched a bit of the ceremony moving the Queen's coffin to Westminster. No one does pomp and ceremony like the British.

I know this is a special occasion, but I have an acquaintance that goes to Paris once a year to babysit a cat while the owners travel. Living in London as you do, I am going to bet you could make an arrangement like that with a willing Yank every summer. *innocent side eye*

What Debby said! I am glad you've got things worked out for Olga, and it sounds like the least disruptive option for the old girl.

I was NOT expecting hunky scaffold man to look like that! (though I'm not sure what I was expecting...)

Every pet I've ever had has been an expensive experience at some point in their lives. I'm guessing that explains a lot on why I don't have pets anymore as much as I enjoy them.

Aside from missing our Mamie just about every single day since December, her passing was also frustrating because I finally, finally had a good groomer and dog-sitting issues worked out.
That home leave program is fabulous.

I'm glad you got some rain (though I do feel sad for those in the queue for the Queen. Say that three times fast!) And also good you can move some of the pots to protect them while the work is being done. I hope they all survive.

Whew, I'm glad that Olga's care is arranged for. Rental cars are expensive here, so I hope your sister's car is available for your stay!

I'm glad Olga's sorted - that's the most important thing after all, and no price is too high. Ha!

I can't wait to find out if the hunk will be back - this is better than a soap opera!

Glad you worked out care for Olga.
How nice that your school will give you money for your flight! I have never heard of that before.

I have friends who have cat sat for TrustedHousesitters. It might be worth looking in to. I, for one, would love to tend to Olga and stay in your house.

A very good solution for Olga, she will stay with familiar surroundings and routine. I always use Lola as an excuse for not going anywhere, she's finicky and doesn't like people, is what I tell them. I wouldn't like anyone else living here while I went away, even for a weekend.

Frances: It's a relief, but also a source of pocketbook angst!

Mitchell: The home leave helps a lot. We get it every two years. If renting a car is our only option it may be cheaper to FLY to Jacksonville from Tampa.

Boud: Yes, we are an American school, but home leave will send employees and their families anywhere on the globe (with some limitations).

YP: They said four days, but I'll believe it when I see it!

Padre: I've said it before and I'll say it again -- I wish you lived nearby! You'd be the ideal dog sitter!

Andrew: Normally we'd have one of our friends do it, but it's hard over the holidays when so many people have other plans.

Ms Moon: I suppose it's worth the expense at the end of the day.

Robin: They pay for work on the tree, but not work on the shrubs, which is garden maintenance and thus our responsibility.

Sharon: It's a lot of ceremony, that's for sure! Kind of funny because in so many ways it feels like people have already moved on.

Debby: We would certainly consider such an arrangement but it's a little too risky to try to pull something together for THIS Christmas.

Kelly: LOL! I think it's the hair. It's so neatly gelled, he looks like an actor.

Ed: Yes, there is a financial downside, for sure! Especially as they age.

James and Brigitta: No! I only looked at local pet sitters via Google. Oh well, too late now. Maybe next time.

Marty: Just when you got everything in place, right?

Jeanie: Oh, the potted plants will be fine. As expected, the workmen have demolished our coltsfoot, but it's basically a weed so it will come back too.

Margaret: I know rentals are INSANE right now. I don't think we'll go that route no matter what. We'll probably fly domestically rather than drive.

Bug: Alas, I haven't seen the workmen, but this scaffold doesn't look anything like the one Mr. Hunk constructed so I'm guessing it's different people.

Ellen D: Yes! It's a very generous program. We get that benefit every two years.

Allison: OK, good to know. I've never even heard of that organization but I'll keep it in mind.

River: It IS a little weird to think of someone else inhabiting our space, but it's better for the dog.