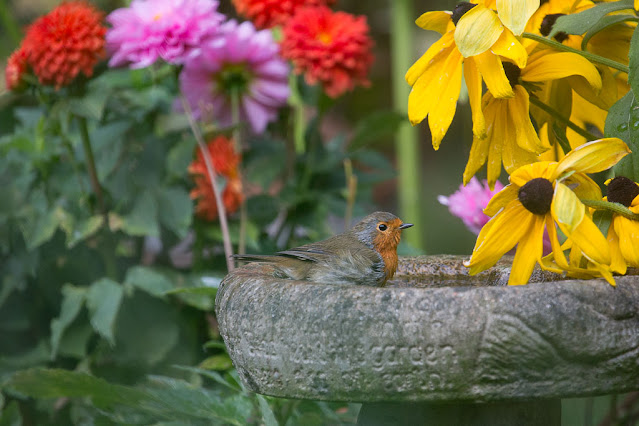 This little robin came to our birdbath yesterday morning and made quite a commotion -- at least, as much commotion as a bird that size can make.

But that's not even the most interesting avian news from yesterday. While walking Olga through the housing estate, I saw a falcon killing a pigeon! The falcon was sitting on the pigeon's back, pressing it to the ground, and that pigeon was flapping and flailing and the falcon was riding it like a cowboy rides a bronco. It was quite a sight, and of course I had neither camera nor phone. The falcon wasn't much bigger than the pigeon, so I'm thinking it must have been a juvenile. I didn't stick around to see whether the pigeon managed to escape. 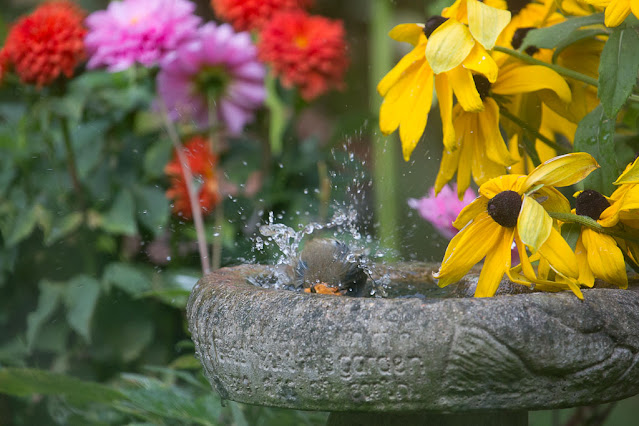 Those of you who read my post yesterday and are interested in the history of Pantechnicon should take a look at the comment left by Rachel Phillips. She clarified its purpose -- calling it a "department store," as Wikipedia does, doesn't really give credit to its interesting past. Thanks, Rachel!

Dave and I did manage to sort out our Christmas plans, at least in terms of buying airplane tickets. Once again, it's good to know what we're doing. I haven't yet heard back from Olga's potential dog-sitter so that's the next phase of planning, but we do have almost four months to iron that out.

Speaking of Olga, her nose swelling has improved. I looked more closely at that sore in her mouth yesterday, and found that it's an opening that goes into her gum above her top teeth. My guess is she had some kind of dental abscess, even though neither I nor the vet could see anything wrong with her teeth and she's still chewing on that side. It's astonishing how impervious to pain she can be. I'll call the vet today. 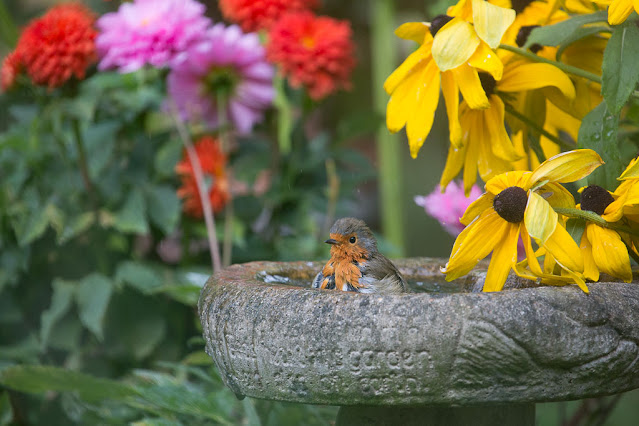 We went to the cemetery yesterday afternoon and had a good walk. She seemed as energetic as usual and gnawed her tennis ball with abandon. We had Fortune Green all to ourselves, which was surprising for a summery Sunday.

We did not see the turaco -- in fact, it's been a couple of months since I've heard any evidence of that bird. I've heard it call only twice this year, and I haven't actually seen it since August 2021. Maybe it's lying low because of the drought.

Speaking of which, we're supposed to get rain almost every day for the next two weeks, according to the weather forecast. That would be amazing but I hope it's real rain and not just mist or scattered droplets. We're still pretty parched overall!
Posted by Steve Reed at 6:49 AM

Please send us some rain!

That little robin was having a wonderful time! I had a blackbird doing the same in my birdbath last Friday. I could hear the splashing and flapping from inside the house :)

I love seeing the robin splashing around. Good news about Olga. Yes, proper rain is always preferable to what I call nuisance rain.

Wishing you a good soaking rain. There’s none in sight here. Those birdbath photos are priceless.

I love the damp little robin.

The killer bird you saw might have been a merlin. Full grown they're not very big, and they're savage hunters of other birds.

A few years ago I was driving up the local country road to the farm when a mourning dove fell onto my windshield. I looked up and there was a merlin, not much bigger than the dove, just above. I guess he'd lost his grip, and his prey flew off my windshield to live another day.

You have nicely documented that little bird's bath.

Co-incidentally a robin dived into our bird bath while I was standing right next to it the other day. He or she splashed about for a while but I didn't see much as he/she was wearing feathers.

Such sweet robin pictures!
And such a brutal image you give us of the falcon and pigeon. That's nature, as I know all too well.
You are right about bulldogs and their pain tolerance. My first husband and I had a bulldog named Beck. That dang dog tried to jump a barbwire fence and in doing so, almost cut off his manhood. He acted like nothing was wrong with him at all. The old country vet we took him to said, "Yep. That's why they fight these dogs."

Those photos of the robin are wonderful and the robin just made my day. Thank you.

Must have been a scheduled bird bathing day yesterday...we had five house finches in our bird bath at the same time, showering up a storm. The birdbath is secured to our deck rail, about the size of a large dinner plate and maybe two inches at its deepest point, but they all were working it. Had to go out and refill it after they were done. It has a lot of visitors (squirrels, as well as umpteen birds) each day.

I love seeing that robin there enjoying her bath.
It's hard to watch a predator kill its prey. I often have the urge to intervene, but I don't.
Glad you got your travel plans sorted out, and I hope all goes well with Olga and her tooth issue.

I love that bird bath!

I once saw a hawk flying with a writhing snake in its talons. The snake wriggled free and dropped to the ground in front of my car. It wasn't a good day for the snake. It managed to get away from the hawk, but I'm certain a 30 foot drop didn't do it any good either.

PS: I forgot to say after a dry summer, we're getting an awful lot of steady soaking rain.

The robins in your part of the world are so much cuter than the robins here. You've capture three very cute photos of this one splashing around in the birdbath.
Good to hear you have your holiday tickets taken care of. I was at my friend Julie's house last night and she was talking about travel plans. They leave on Friday for France for two weeks then they have Antartica in January and Japan in the spring. They are so excited to be traveling once again.
I haven't made any plans yet. I'm still deciding if I need a new car instead of a trip.

evolution in dogs, a protection to fool predators into being unable to recognize weakness- pain. Before Veterinarians were invented. Your little robin is the sweetest thing today!! Especially loving the last photo- it looks so satisfied. Fabulous shots!

Keep On Keeping On,
Cheers

My elderly aunts always loved watching a certain red-tailed hawk out the window.... until they saw it swoop down on a Cardinal. Yep.... Wild Kingdom (or National Geographic) at its best!

Hope you get things resolved with Olga.

I agree with everyone - the robin sequence is just marvelous. The coneflowers and zinnia backdrop add even more oomph.

Glad you were able to get a closer look at Olga's muzzle, inside and out. Let us know what the vet recommends.

A juvenile falcon is as large as its parents when it leaves the nest (true for most birds, actually), but as Boud says, some of the falcons are small but mighty.

Hoping your forecasted rain gives a good soak to your garden!

Your robins are so much cuter than our American robin. The red shouldered hawks have been really active in my yard the past several days flying among the trees, in the birdbath, on the T-bar of the old clothesline. And hard to get a picture.

Even though I know it's normal, I wouldn't be able to watch that bird attack. It would upset me. Glad you're getting your plans finalized. Poor Olga! Could the abscess be causing the nose swelling somehow?

Really love the little Robin.
I wonder if it was a bite on the nose. My daughter's dog had a really large lump on his back, it took a few days to go down but we think it was a bite.
Briony
x

Sweet robin in the birdbath! We have had a lot of hawks swooping around lately. My son saw one dive and kill a small rabbit on his morning run - we always think, "the circle of life".

The colours in the photos …quite beautiful

Elizabeth: I would if we had any to spare!

River: Sometimes the birds make a lot of noise. Starlings, especially, do a lot of loud flapping.

Andrew: We got some proper rain overnight, thank goodness. Thunder and lightning, even.

Mitchell: But at least Spain is SUPPOSED to be dry!

Boud: I'm impressed the dove survived! I read about merlins but the consensus seems to be that they're not often spotted in urban locations.

Colette: These are only three of about ten shots I have! (And about 40 I took!)

Ms Moon: It's true. I often think the same about Olga. Dogs of her breed are known for being valiant fighters. (Not Olga herself, of course.)

Red: It's true but it must happen all the time!

Mary: Well, I hope you got a photo or video of THAT! Sounds like a ruckus!

Robin: Yeah, I didn't step in. The falcon needs to eat, after all.

Debby: I wonder how often a falcon loses its prey like that. It must be pretty common, even with those strong talons.

Sharon: Robins here are much smaller and daintier than those big hulking American birds! (Which are really thrushes, apparently.)

Linda Sue: It's all about not showing weakness or vulnerability in front of the pack.

Mike (and Chris?): The vet appointment is this afternoon, so I'll let you know tomorrow!

Margaret: I didn't watch for long. Yes, I think the abscess is definitely responsible for the swelling.

Briony: We thought of that but when it came back in the same location, that seemed less likely.

Ellen D: There's a video out there somewhere of a family releasing a rehabilitated baby rabbit into nature, and a hawk swooping down and killing it almost instantly. I think it's called "Nature She Fierce" (I am not making this up).

John: Sometimes the flowers all come together in just the right way!