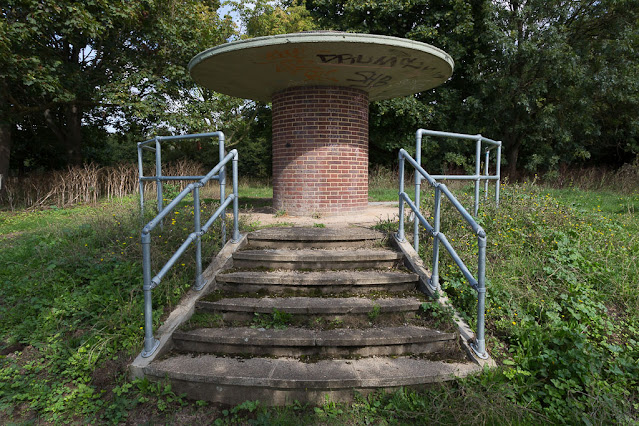 Here's another photo from my walk on Sunday. This object stands beside the Thames near Hampton Court, and it's a bit of a mystery. There's been a lot of online speculation about what it is. This post, for example, simply calls it a "curious riverside structure." And in this discussion thread on a site for canal boaters, users guessed at its purpose to ridiculous effect.

I thought it was a ventilation shaft for a pedestrian or rail tunnel, though I knew of no such tunnel in that area. Finally, someone on that discussion board cleared up the mystery, as explained on this Geograph page: It's a ventilation shaft for a tunnel carrying a 24-inch gas main. Here's another photo, from May 2016 -- it's interesting that even that recently it didn't have handrails, so those must be a very recent addition. Some say it may also serve as a shelter for people walking the path or waiting for a ferry from a boatyard across the river.

In any case, it's pretty cool looking!

We are preparing for another onslaught from the Russians upstairs. They have a construction crew scheduled to arrive tomorrow, to work on a persistent leak in their roof and install some new windows. The workers are going to have to erect a scaffold on our patio. Dave yesterday moved aside a bunch of our plants, and I'm afraid our coltsfoot may simply be trampled because we can't really relocate that.

This is after the Russians spent Sunday drilling something upstairs with a very noisy concrete drill. When I came back from my walk it was grinding away and I asked Dave, "What IS that?" He said, "It's been going all day!" I feel like we live beneath Bob the Builder -- or maybe Vlad the Builder -- though I can't really blame them for wanting to fix a roof leak. That is a significant problem. 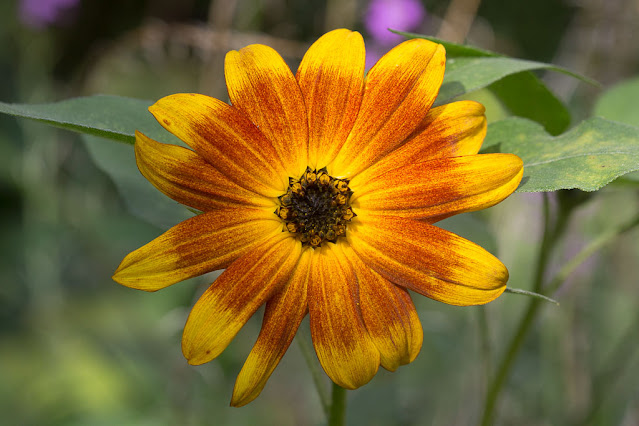 Another one of our sunflowers has opened. This plant is only about 18 inches tall, but it and several other smallish ones are apparently big enough to bloom, as they all have buds.

I took the last of my summer library books back to the library yesterday -- "Crossroads" by Jonathan Franzen. I didn't even read it. It's a huge book and it's been taunting me from the hall table for the last couple of weeks. I finally decided I just don't want to take that on right now. Maybe eventually. I always like Franzen's novels when I finally sit down and read them, but first I have a bunch of New Yorkers and some other stuff to get through.

We are having a terrible time finding someone to keep Olga over the Christmas holidays, when we go to Florida. The dog-sitter and kennel we've used before are already booked. I'm going to have to research some more options this week.
Posted by Steve Reed at 6:22 AM

I suppose there is some kind of venting on top where we can't see. The steps look older than the structure. It does look a bit more than just structurally functional.

You could send Olga downunder, Lola will keep her company.
Ha Ha.
I planted dwarf sunflower seeds this morning, in a blue ceramic pot.
I hope you do find a place for Olga.
The structure looks large enough to be a vent for a whole underground house.

Thanks for the earworm!

Your upstairs neighbors are really getting on MY nerves.

I hope you easily find someone for Olga.

People shelter beneath the lid of the structure? No way! How does that work?

When I first saw it I thought it was a landing pad for flying saucers from Planet Zog Minor.

Nice to see you referring to Geograph. Maybe you should join us. It's free.

I know how you feel about large books. I get a gift card every year for my birthday from my brother that I use to purchase books online. My box arrived a couple weeks ago and one of the books I picked about the five families of the New York mafia, was about three inches thick! I didn't check the page count when I bought it. I know that it will probably sit on my "to be read" pile for quite awhile as a result. Reading a book of that magnitude is a big time commitment.

I expect people are catching up on the travel they couldn't do during the pandemic. When I had the pet care service Christmas was usually booked out by July. It would have been earlier but I wouldn't accept bookings earlier than that. Some people would have liked to book year to year. I hope you succeed.

I would have told people it was alien ship docking port.

Did you call that guy from the ad you posted the other day? He looks like he would be fabulous with Olga :)

Love the sunflower! Hate the drilling noise, but you're right - a leaky roof would end up affecting you guys too.

I guess your friend who house sat for you this summer has other plans?

Ventilation shaft? Looks solid to me, I guess it's open or has a grate on the top?

How many people live upstairs from you? Lord, they are busy. Even though a roof leak must be taken care of, I would resent the hell out of a scaffold being built on my patio.
I agree with The Bug. Call that guy on the flyer to dog sit Olga.
Or not...
You might come home and find your darling doggie wearing tie dye and hitting a bong.

Maybe the Russians could watch Olga? They do owe you for taking care of their plants while they were gone. Hopefully you will think of a friend who will house sit while they visit London.

I do hope you find someone who will watch Olga with lots of love and good care. If I lived closer I would do it.

That's a cool looking structure and since it casts some shade it had duel purpose. Good luck with all the drilling and pounding that is headed your way. And, good luck with your search for a dog sitter.

I thought it was a large cable spoolie- the sort that college kids use for their back yard tables. Olga is such a good old girl- maybe your friends would like to have her for
Christmas - Maybe Sarah could dog sit- depending on how long you will be gone.

I find it immensely difficult to get started on very long books. (pun intended) I hope you find someone to watch Olga. I worry about my cat too and had to hire a person to come in and check on her once a day last time I went to New York. Dogs are probably more complicated than that though?

I, too, was wondering about the flyer you saw the other day for a dog sitter. It looked to be on the up and up.

The roof leak is a must fix but boy -- what a pain. Can you put up a small fence or barrier around your plants? At least it warns people off, though I suspect you're right about being trampled in time. Or, maybe they move the ladder or whatever!

I can see why people would have fun suggesting what the figure is. I'm sure there would be some very humorous suggestions.

Hopefully the Russians' work won't drag out too long. I'm sure they're not overly delighted at the thought of it, either, but hey they don't blog here so my sympathies are with you and Dave and Olga and the plants :D

Andrew: Yes, there are vent openings above the roof.

River: It would probably cost us as much to send her to Australia as to board her here!

Mitchell: Not easily so far, but we're working on it.

YP: It does look very space age. It's larger than the photo might make it appear. A person could easily stand beneath that roof.

Ed: We've made that mistake in the library -- bought a book that looks interesting only to find that it's 700 pages long. (Too long for ANY high school student to tolerate.)

Boud: Yeah, I guess I should have gotten onto this task earlier! But I thought we'd be fine booking in September.

Bug: I looked at his web site and he's already booked out until next summer!

Ellen: Yeah, he's going back to Northern Ireland for the holidays. There are openings at the top of the shaft, above the roof.

Ms Moon: Olga is already so mellow I'm not sure what a bong would do to her! There are only four people upstairs (one of whom, the teenage son, is practically invisible) but you'd think it's a whole freakin' army.

Ellen D: I'm not sure I want to go there!

Padre: She will be happy to receive it. :)

Robin: I wish you lived closer!

Sharon: Yeah, I like the fact that they apparently built it with multiple goals.

Linda Sue: We'll be gone two weeks, so it's quite a commitment. I'd rather hire someone, even though it's going to cost an arm and a leg.

Margaret: Yeah, dogs require a whole 'nother level of care. I used to be able to leave my cat for a weekend and she'd be fine. But Olga needs daily walks and she's never spent a night alone. Perish the thought!

Kelly: I think he's totally legit but he's booked into next year, according to his web site.

Jeanie: I figure it's September and the plants are going to die back in a few more weeks anyway. So I guess it's no big deal if they do get squashed. (The ones that can't be moved.) They'll be back next year.

Red: There were a lot of people who suggested things similar to YP and Bob -- that it was somehow associated with space travel!

Jenny-O: Surprisingly, the work is supposed to be done within about four days, though I'll believe it when I see it. Stay tuned!