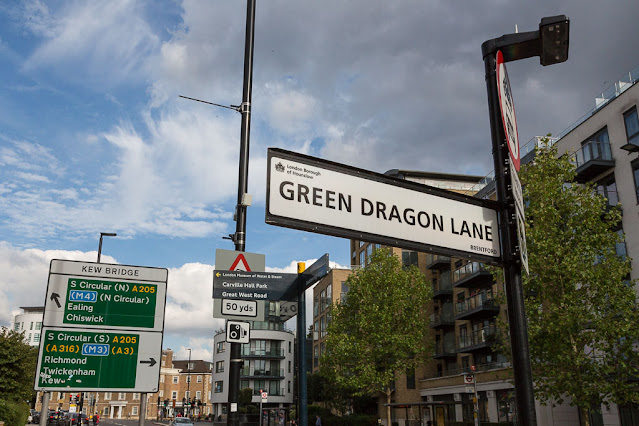 I found this interesting street sign on my walk last weekend. Britain has some fun street names. I'd love to be able to throw out a street name like that when I'm filling out dry official forms, like renewing a driver's license or paying taxes. Kind of adds an element of levity to an otherwise tedious task.

We have some clarity on what's going on upstairs. Here's what it looks like now: 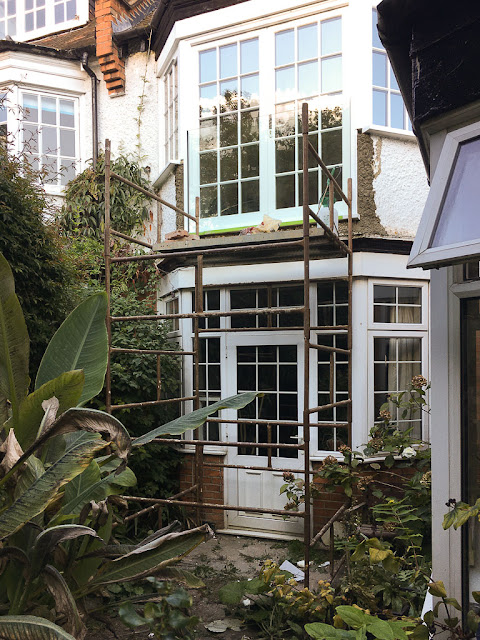 So, yes, there are French doors with a "Juliet balcony," which basically means no balcony, just a railing. In this case the railing is a sheet of glass so you can barely see it, which is good. Nothing about this seems objectionable except the surprise.

The landlords tell me the Russians had to file for permits to do this work, but we never got any kind of notification, and the landlords didn't either. They said it would normally have been sent to us as the residents, and it's possible we threw it away, because we often discard stuff sent to "occupant," but who knows.

Anyway, as far as I'm concerned it's a done deal and we're rolling with it.

We had no kids at school yesterday -- the middle and high schoolers were all off on school trips. Since I had no "customers" I spent the day weeding the fiction section. It's amazing how much unread stuff accumulates in a relatively short time! I pulled a whole cartload of books that hadn't been checked out in at least ten years.

I love weeding. I got so focused I forgot to eat lunch, which never happens!

Well, that’s certainly an improvement for the Russians. It does look very nice. And, just think, now they can stand like Джульетта (she’s the one in the east; you know, the sun) and visit with you while you’re in your garden. I’ve always for better street names in my addresses. My best was when I was in college and lived on High Street.

That will let in a decent amount of light. I can understand the reason for it.

Green Dragon pubs...as with the Black Robins in Kent..were smugglers' bases.
It would be interesting to know the history of the locality.

Green dragon lane as if there would be red dragon or blue dragon lanes around as well. So funny

I live on Pottowattomie Court which has always been a terrible street name as it is difficult to spell!
The French doors look nice - they must want a better view of your lovely garden!

I can see the reason for weeding out unread books, but often I hear about old books I want to read and I'm glad when I can still find them at the library.

Well it doesn't look quite as dire as I'd feared. Not a bad match for your windows, too. Let's hope the scaffolding goes soon.

I guess because I've grown up in a rural area with miles between neighbors and now live on a lot of several acres and lots of trees, I'm not sure I would ever enjoy spending time in my backyard with Russians above watching my every move. But I know that others, like you, are way more tolerant of this arrangement. I do admit though, the choice of door really fits in with the style of the building and matches your unit so it really isn't an eyesore.

And the Juliet balcony was done quickly! Which is good.
There's a small street near here called "Pinhook Lane" which bothers me. There are both pin worms and hook worms and neither of those are good to have and often represent poverty. I shudder every time we pass it. Green Dragon Lane is much nicer.

Green Dragon Lane is such an interesting name. Makes me wonder what street I would like to live on... maybe Full Moon Rise Avenue.
The balcony looks like it will be okay there.

The doors look very nice but I'm not sure what purpose it will serve except to let fresh air in. You will have to let us know how they use the new doors.
I love that street name. The town of Carefree just north of Scottsdale has a lot of cute names like Tranquil Lane and Rocking Chair Road and Never Mind Trail. I don't think a Green Dragon would fit in with their state of mind.

OK, I guess I approve this change (I know my approval is VERY IMPORTANT to you - ha!).

I would also love to weed books - that type of activity is why I thought I wanted to be a librarian back in the day :)

Like Mitchell, I was thinking about how the Russians will 'Romeo, Romeo, wherefore art thou, Romeo' you in ther garden

Uninterrupted time is an ideal time to accomplish a project like that. I too love weeding through things, but once I start, I want to see it through to the end. It seems like a lot of work and expense for no real good purpose that I can see.

The Russians own their flat. You rent your flat. Who owns the exterior of the building? If the roof fails, who has to pay for that?
Inquiring minds want to know.

I think I'd rather have a wrought iron balcony/guard rail than that piece of tempered glass. It doesn't go with the architecture, too modern.

There is a Dumb Woman Lane near Rye. Up in Yellowknife, there is a Ragged Ass Road and in Newfoundland, there is a Blow Me Down Road. Those are the only strange ones I've seen.

I'm surprised at how quickly the new windows were installed. They look nice but I agree with Ellen about the rail. I'm sure the Russians are eager to hear our opinions:)

It does look rather nice. The workers seem fast unless the previous photo was not recently taken.

Ten years is a very generous period for unread fiction to remain on shelves but if the space is not needed, no harm in keeping it.

Now if you'd forgotten to DRINK lunch, I might have had sympathy for you.

Mitchell: Well, I think that's what our landlords were worried about, the possibility that the Russians would be hanging over us while we were on the patio! We're not out there much anyway, though.

GZ: I had never heard of Green Dragon pubs, but I imagine that's what this street was named after. It seems there are several Green Dragon streets in and around London. (And probably elsewhere!)

Ellen D: OK, far be it from me to cast aspersions on anyone's address, but that is a TERRIBLE street name. As you said, the spelling alone would be a nightmare for people.

Kelly: It's always a judgement call. I try to keep things I think people might return to, if (for example) the book was well-known or popular at one time.

Boud: I agree, it matches the architecture well.

Ed: Well, that's just urban life. There are people all around all the time! We have apartment buildings in the back that all look down on our garden. (Which is why we don't trim the trees there.)

Ms Moon: Yeah, "Pinhook" makes me think of worms too. I can see how that would gross you out.

Robin: I always thought Half Moon Bay was a great name for a town!

Sharon: I'm sure it's for more light and air.

Bug: Well, your approval makes me feel like MY instinct to approve it is correct!

Bob: I wonder what that sounds like in Russian?

Margaret: I feel the same way! I tried very hard to get through the entire fiction section, which was a challenge in two days.

Allison: My landlords and the Russians split the cost of general repairs, like the roof.

Ellen: I like the glass, actually, because it's pretty much invisible. Of course we'll see what it looks like when it's been there a while. It all depends on how well they keep it clean!

Pixie: Well, those are hard-to-beat street names. My favorite in London is still Ass House Road.

Andrew: Well, that's how I feel -- if we have the room there's no pressing reason to get rid of it. But some of our shelves ARE getting pretty tight.

I didn't even notice the glass panel until you mentioned it and I had a second look. The French doors look nice.
What happens to the weeded out books?

Those actually look pretty good. I'm sure it will give them a lot more light in their room. Could be lots worse but I wonder about the permits!