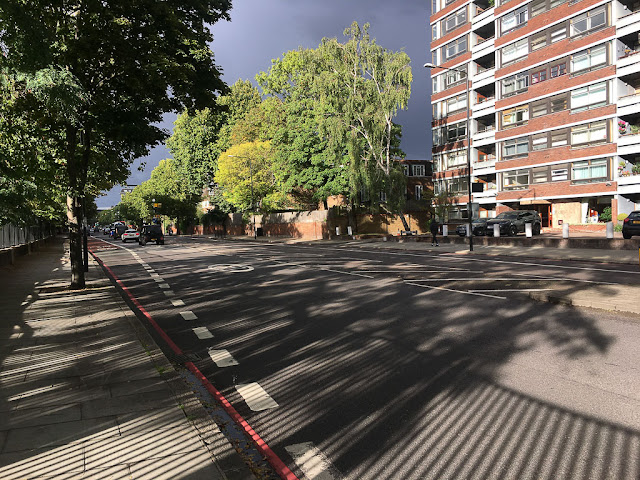 The weather was mercurial on my walk home yesterday, with moments of bright sun against a dark, rainy sky. In fact, a few minutes after I took this photo, a rainbow appeared as the sun shone through those gray clouds -- but it only stayed for a minute and I wasn't fast enough with the camera.

I have been in a funk the last couple of days. I guess that's not surprising with our recent dog news, which I suspect is at the root of a lot of it, even though Olga appears perfectly healthy and spry day-to-day. (We're still waiting for her biopsy results.)

But we've had other stuff going on as well. The Russians' construction project is (hopefully momentarily) paused because, allegedly, the contractor needs dry weather to do the roof work -- so we're having to live with the patio scaffold for longer than we'd hoped. In addition, Mrs. Russia told me yesterday that her husband is about to tear out and replace the floors in their bedroom and living room because, as she put it, "they squeak." (I wanted to respond, "Well, naturally! It's a 100-year-old house! WHO CARES if the floor squeaks?" But I did not.) She said, "It will be a long project. And it will be noisy."

I sometimes wonder if they are trying to drive us out. Is that paranoid? Do they want to expand their Russian borders into our downstairs flat?

Yesterday I had to stay home all morning waiting for British Gas to come and do their annual gas inspection. It went smoothly, once the guy showed up, and then as I walked to work I took care of some other long-standing errands. I've had a small amount of Singaporean money in my armoire for ages, the remnants of a long-ago trip, and I finally changed it back into pounds; and then I deposited it and some Scottish money my friends Pam and Bryan mailed to me (left over from their recent trip to the UK) at the bank. Good to have that taken care of.

At work, I finally got back the bound copies of our school newspaper that I began arranging for in late spring. So that's another project done.

I am making progress, despite the funk. 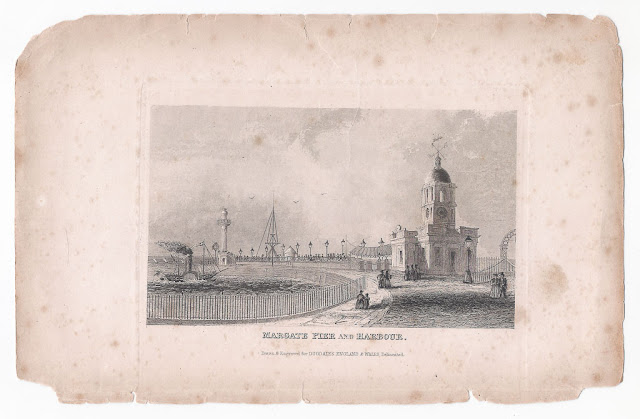 When I met up with my friend Sally in Greenwich back in late July, I bought this at Greenwich Market -- an old illustration of the pier and harbor at Margate. I think it probably was cut from a book, and yes, it's crooked on the page, which drives me crazy but never mind. It only cost a pound or so and when I got home I tucked it away and then forgot about it. 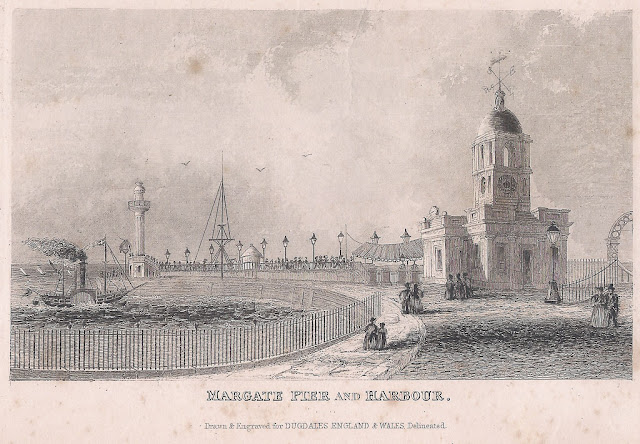 I bought it intending to blog it. But last night, when I got to thinking about today's blog post and wondering where this illustration was, I COULD NOT REMEMBER! I thought I'd either slipped it into a book or filed it in our file box. I spent, not kidding, at least an hour combing through books and files searching for it, and went to bed wondering if I'd mistakenly thrown it out.

Then, this morning, I checked a book I had apparently failed to check last night, and boom -- there it was. The Reed filing system triumphs again. 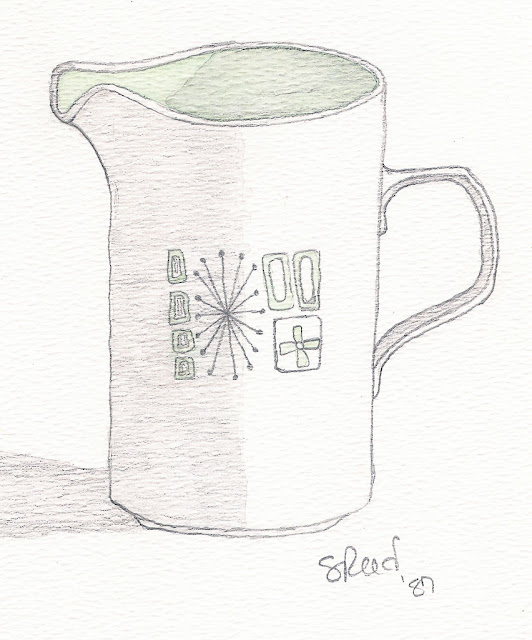 I also found this sketch, which I drew 35 years ago, of the creamer from a groovy set of '60s china (the pattern was called "Cathay") that I used to own. It's not a very good drawing, but I was happy to find it because I've long thought that I threw it out. (I find it interesting that the decal is flipped on my drawing vs. the creamer shown in the picture linked above. Were there variations in the manufacturing? Did I draw it in a mirror? But the decal is flipped vertically as well as horizontally. Hmmmm...)

Anyway, this has been a long, rambling post, for which I apologize, but that just shows the disorganized state of my mind at the moment. At least I found my missing illustrations. I guess I should be more careful about storing things in books!
Posted by Steve Reed at 7:16 AM

The contrast in your photo is so dramatic. Glad you got to see the rainbow. So sorry about your worries about Olga. The waiting is awful. I hope the news is good. As for the Russians, do they perhaps know you and Dave have Ukrainian ancestors? Wishing you a better day.

Please tell Mr Russia that there is a simpler solution to his squeaking floorboards and that is talcum powder! Brush it into the cracks and abracadabra most of the floorboards will stop squeaking. Those that continue to squeak should be screwed down. And while conversing with him please tell him to get his troops out of Ukraine!

Living close to other people is always a little threatening because of the lack of control over noise. Perhaps it is time to schedule a noisy project of your own for the same time period? A competition of sorts? Just kidding. Sort of. Love the drawing.

You may be right about the Russians expanding territory, I am sure that they would love to have your flat with the garden. I would too !
The pitcher drawing is superb, I love it and the design , crisp and clean- just like you! I also love a ramble- that is how my brain works. Your top photo is dramatic, the sky such an odd color. Great contrast !

I'd be upset with neighbors like yours, too. Endless noise and dust and disruption. I do wonder if they'd be happy to take over your space too. They're certainly not congenial.

Maybe you're Ukraine and your upstairs neighbors are Putin planning an invasion???

To keep that Sartre reference from your own comments going,yes, Hell IS other people.
And I'm thinking your reverse drawing was just you channeling Michelangelo's reverse writing.

Well you have a lot of things to be in a funk about!

I think you drew the decal that way as some sort of signal - if someone noticed they were supposed to rescue you!

Wait- she actually said, "It will be a long project. And it will be noisy."?
That sounds like a threat to me. This is ridiculous!
And yes, no wonder you're in a funk. Things are all up in the air right now for you- things you can't control.
I wish I could have you over for a martini on the porch. We could sort it all out.

Must have been a different version. I found one exactly like your drawing on eBay.

If the Russians expand their territory, per Warren Zevon, I'll be sending you, "Lawyers, Guns and Money"!

Hope you have good news soon to lift your spirits!

I don't like your Russian neighbors. They are a bit too Putin-esque for me. They have no sense of boundaries or neighborliness.
Hope all goes well there and things don't get more stressful than they are right now.

That sky in your top photo is quite dramatic. I hope you made it home without getting soaked. Also sorry about the worry about Olga. I understand completely.
That drawing compared to the real thing is interesting. It does make you wonder why the difference.

Sometimes searching in the disorganized system of organization, can turn up some long ago missing items.

I think it's a very good drawing, simple but well done.

I'd be annoyed with the scaffolding and the never ending noise. They must totally remake that flat every year or two. Too bad you couldn't get on their balcony and peek in when they were gone.

It's hard to process illness of a loved one, even when they seem fine at the moment. It does sound like you're getting some stuff done which always helps me feel more productive. Was there a prison at Margate? Off to do some research.

It's not unreasonable to think the russians are trying to run you off. A floor replacement should not take all that long. The fact that she's telling you it is, sounds like a threat. How can a roofer say he can't work in the rain? It rains all the time in the UK, well it used to. Roofers work in the winter here and it snows. I think they want your flat.

I'm glad you straightened up that photo when you enlarged it for us. That kind of stuff bothers me, too.

When do you leave for FL? I think you'll feel better once you've made that trip.

I love the long and rambling post -- and yes, I can see why funk would set in -- that's a lot on your plate. It's stressful when home stuff is so delayed (ask me about Rick's taking 10 hours to install a dishwasher -- and it's not done YET). I stopped counting trips to the hardware store or his house after nine. The Russians would be driving me nuts. But I do love the Margate images. They're really beautiful. So glad you found them.

Margate looks interesting. I love your first photo with the shadows and light.

Mitchell: It was a very dramatically-lit scene!

Colette: I feel like that solution could never end well!

Linda Sue: We've long speculated that they might have designs on our flat. But who knows.

Padre: Thanks! Hugs back!

Boud: Believe me, I only write a tiny fraction of what I think and experience regarding the neighbors! LOL

Marty: Sartre! That's who it is!

Bug: Ha! Like semaphores! A very subtle way to send a signal, I'd say.

Ms Moon: The way she said it also made me think that it sounded like more than just a warning. Like she was trying to emphasize that they were going to make our lives miserable.

Ed: Yes! That's it! Thanks so much for that link. (I'm tempted to buy it, actually!) I'll take the lawyers and the money, anyway. :)

Robin: I think there's more going on than meets the eye. They seem to bury themselves in home improvements, and I suspect that's because the tension is high in that household.

Sharon: I made it home dry! I think the clouds had blown past by that time.

Red: That's for sure!

Ellen: That's what we say, too. How can they possibly have so much to renovate?!

Margaret: I'm not aware of a prison. Margate is an old beach resort on the Kent coast. I visited there some time ago -- it's linked in the post.

Allison: Well, she also said her husband is doing the work. So that could be why the job will be slow. God forbid they should hire a professional.

John: I've been there too! I like that area.

Kelly: Soon! October 8. I dread the traveling but it will be good to get there.

Jeanie: Ugh! Sorry to hear about your dishwasher installation! That must be a nightmare. Hope it's solved now.