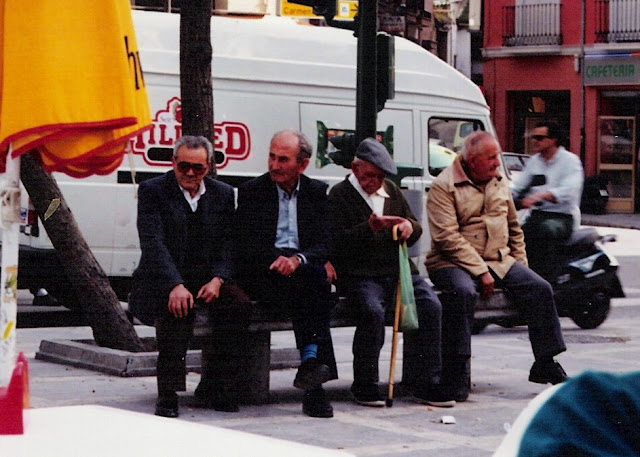 A couple more scanned photos, this time from Spain, where I traveled in March 1994. The photo above is one of my earliest attempts at candid street photography. I was sitting with a friend at a cafe in Granada when I spotted these old men, survivors of Franco and maybe even the Spanish Civil War, doing what I imagine they did every day -- gathering on a favorite bench. I wanted to take their photo, but I didn't want to be obvious. So I pretended to point the camera at my friend -- that's his shoulder, lower right. The old guy on the left doesn't look fooled.

I wonder if any of them are alive now. 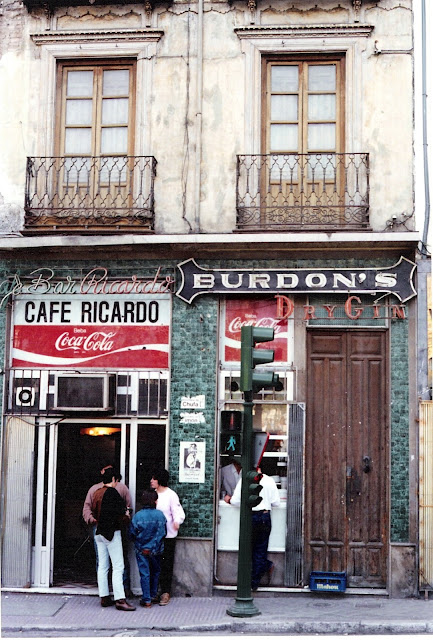 And here's an early attempt at storefront photography. This building on Calle de Elvira faced the same public square, Plaza Nueva, where I shot the old men. Why I couldn't line up the photo to shoot the building straight on, and not crop the sign on the left -- well, I'm not sure.

After scanning this photo, I got on Google Streetview to see what Cafe Ricardo looks like these days. It didn't take me long to find it, even though I had only the vaguest idea where it was and couldn't remember the name of the square. Sadly, it seems to have deteriorated in the ensuing years, much like Spain's economy: 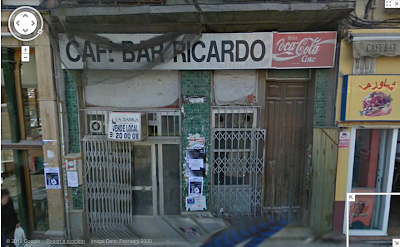 Wonder why they took down their neon and that great old Burdon's Dry Gin sign? That made the place.
Posted by Steve Reed at 6:23 AM