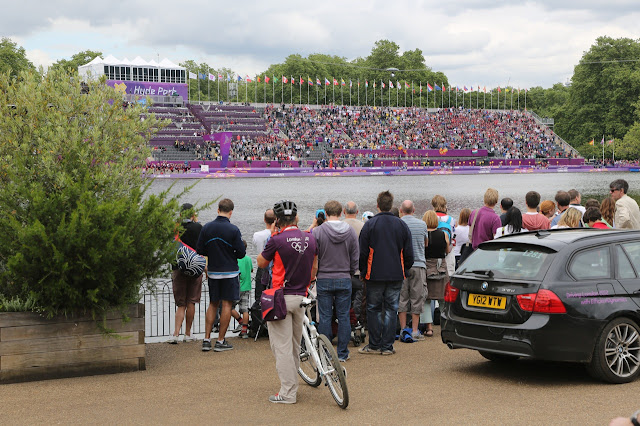 Here's one of those classic "right place, right time" stories. You know I haven't paid much attention to the Olympics -- not the actual sports, anyway. Well, yesterday, Dave, Adam and I went walking in Hyde Park just to see the sights, and quite by accident we stumbled onto the conclusion of an Olympic event.

We entered the park at Kensington Palace, where everything looked pretty normal -- perhaps even quieter than usual. But as we walked toward the Serpentine, the large pond in the park's center, we began seeing more and more crowds. Eventually, spectators waving Union Jacks were thick as ants.

We were just trying to get a cup of coffee at the Lido cafe on the Serpentine's south shore. We navigated the hordes and got our drinks in time to stand on the cafe's patio and watch a gold medal ceremony unfold across the water, at the specially-erected Olympics viewing stands. At the time, we were so pathetic we didn't know who won or even which event we were watching. We could see the tiny figures of the winners; when they were announced the crowds went wild, waving flags and cheering, so we figured the British were victorious. Only later did we learn this was the men's triathlon, where British athletes and brothers Alistair and Jonny Brownlee won the gold and bronze medals, bookending Javier Gomez of Spain, who won silver.

So here I was, completely oblivious to sports, watching an Olympics medal ceremony. The universe works in strange ways. 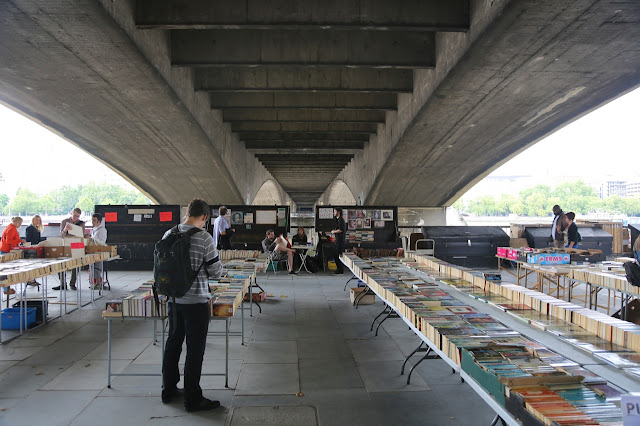 After the ceremony we took the tube to the Thames, where Adam wanted to see the sights, despite his earlier assurances that he'd been to London before and didn't feel the need. I can understand how a visit without a glimpse of  Big Ben, Parliament and the Eye would feel wrong.

This used-book vendor regularly peddles his wares on the South Bank, under the Waterloo Bridge. I resisted the temptation to browse. I have plenty to read already. 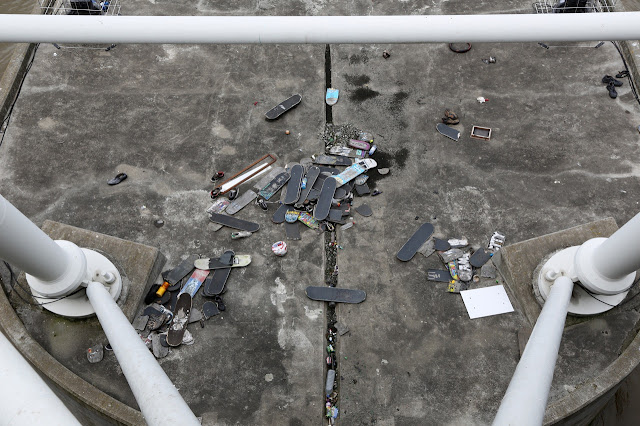 Finally we walked back over the river, where we saw this curious sight -- a bunch of discarded skateboards atop a bridge support. Had a dozen or so skaters crashed their boards there, leaving the detritus behind when they were whisked away to the hospital? Who knows?

We took the tube home, and by this time, we were exhausted. We abandoned plans to visit the Great British Beer Festival, even though we already had tickets, and settled instead for a pint at our local pub and old episodes of "Little Britain" on DVD.

Today, Dave and I are off to Amsterdam for a brief rendezvous with some Michigan friends, and Adam heads back to the states. Tomorrow, blogging from the land of tulips, windmills and coffee houses that primarily serve herbaceous side dishes!
Posted by Steve Reed at 5:43 AM