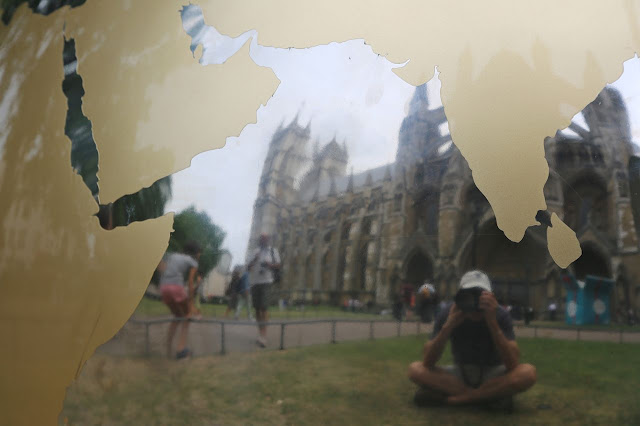 I call this photo "Self-Portrait with Westminster Abbey in the Indian Ocean." Or at least, I would if I gave my photos titles.

I took Dave's parents to Westminster Abbey yesterday, on the last, wild day of their visit. (I'm up early this morning to help them get out the door and on their way to Heathrow.) A rather tacky sculpture stood on the Abbey grounds featuring a gymnast balanced atop a globe, and fortunately the globe was highly reflective. And what's funny -- after I took this shot, two or three other groups of people who were watching me did exactly the same thing. I started a trend!

After Westminster we went to lunch, and then to St. Paul's Cathedral, and then to the Imperial War Museum.  I didn't go into Westminster or St. Paul's -- I've seen both before, and they're too expensive for repeat visits. Instead I just sat outside and watched the crowds, and took photos here and there.

I did go into the War Museum, even though I'm not all that into military stuff. (It's free, and Dave's dad really wanted to see it.) Standing among all those tanks and missiles, I couldn't help but wonder why humanity couldn't have invested half the effort and expense of blowing each other up into just getting along. Call me crazy. And here's a weird coincidence: I saw an exhibit about British poets of World War I, and among them was Edmund Blunden, whose poem about ice skaters I posted just two days ago. I hadn't even heard of Edmund Blunden before that, and now he's popped up twice in one week.

Popular opinion about the closing ceremonies of the Olympics appears to be divided. (Sam Leith in The Evening Standard: "Hairy flaming Jesus: what was that all about?") Apparently the failure of Kate Bush and David Bowie to make anticipated personal appearances, the fashion segment and the mishmash of other musical artists threw some people for a loop. I really liked Ed Sheeran singing Pink Floyd, for what it's worth. I like that no matter where he plays, Sheeran stands there in jeans and a hoodie, with only his trusty acoustic guitar. He's like a musical granola bar.

When I got up at 5 a.m. this morning, there was no light in the sky -- unlike in June, when the sun began rising at 4:30. We're inching toward the darker days of autumn!
Posted by Steve Reed at 5:48 AM