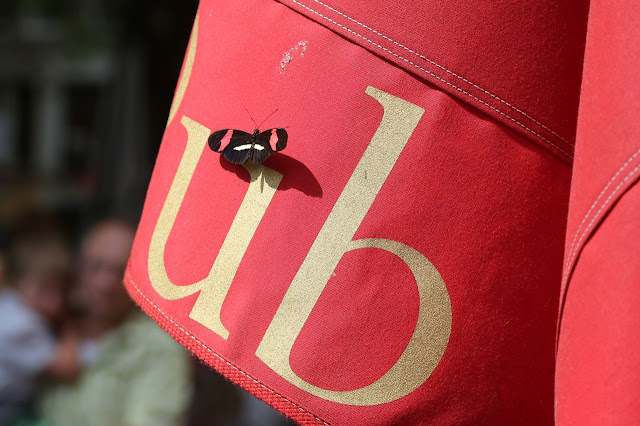 Dave and I were sitting in a sunny cafe yesterday, watching the parade of humanity, when this butterfly settled on a nearby umbrella. Only after we got home and I did some research did we learn it's either a Heliconius erato, known as a red or small postman, or a variety of Heliconius melpomene, a common postman. Here's the weird part -- it's native to Central and South America! What it's doing in Amsterdam, I have no idea. We think maybe it's an escapee from an exotic butterfly garden. (Apparently hobbyists breed them...?)

Strange encounters in lepidoptery aside, Dave and I spent yesterday exactly as we planned -- lounging in and around the Leidseplein, having lunch and watching the crowds. I went for a couple of longish walks, taking photos and scouting out the local graffiti and street art. It was great to have a day with no formal sightseeing and no agenda.

In the afternoon I stopped at a coffee shop that sold curious, oblong chocolate-covered goodies labeled "chocolate dadel." I asked the woman behind the counter what was inside.

"Dadels," she said. "I don't know the English word for them."

Fine, I said, and taking a gamble I ordered two. (I wouldn't order unknown snacks in just any Amsterdam coffee shop -- God knows what narcotic substances I'd encounter -- but this was almost like a Starbuck's, and thus risk-free.) The woman and her coworker asked me to tell them the English word for "dadel" once I figured it out. It wasn't difficult -- one bite and I knew they were dates. They were yummy, too.

This morning we're catching an early train back to London. Dave's parents return tomorrow for part two of their visit!
Posted by Steve Reed at 5:24 AM