Culture and the Chatterbox 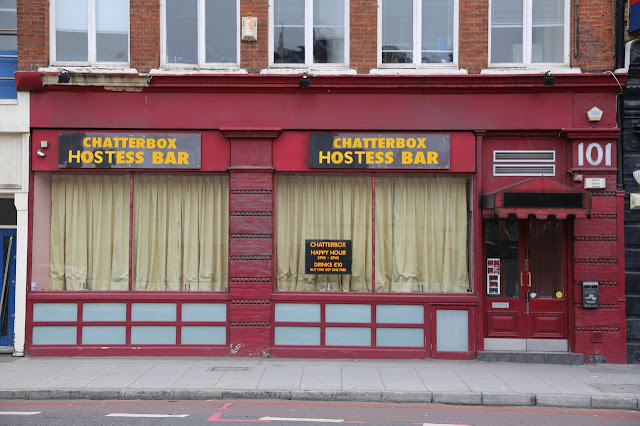 Dave and I found ourselves with a few spare days this week and seized the opportunity to indulge in some culture.

On Tuesday we went with Sally and Liz to Sadler's Wells, a dance performance space in Islington, to see a production of Matthew Bourne's "Play Without Words." We loved it! I'd seen Bourne's "Swan Lake" years ago in New York, but this was the first time I'd seen anything else by him. Brilliant dancing, with multiple dancers identically dressed and simultaneously acting out different iterations of the same scenes.

On the way to dinner near Sadler's Wells, Dave and I passed the bar in these photos. What exactly is a "Hostess Bar"? Hmmm... 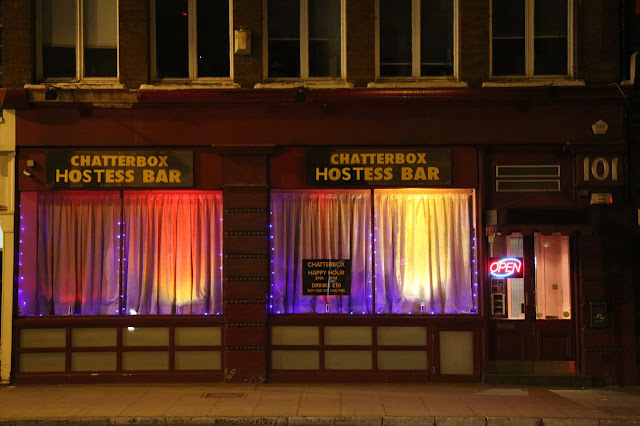 I went back a couple of times to shoot it during the day and at night. I love the wonderful, tawdry colored light in those windows.

Anyway, on Thursday I went to see "The Red Desert," a Michelangelo Antonioni film from 1964 and his last in Italy before he moved to London to make "Blow Up." I love "Blow Up," but although I found "The Red Desert" visually interesting, the plot was difficult to follow. Basically, it's about a woman struggling with depression in a diseased industrial environment. Apparently it was Antonioni's first color film, and color figures prominently in the cinematography and the storytelling. Dave, who didn't particularly care for "Blow Up," sat this one out.

Yesterday we went to see "The Dark Knight Rises," the latest batman flick. It was pretty good, but it didn't knock my socks off. It began with references to the last movie, and I couldn't remember anything about that one, even though I saw it. So I didn't get off on a good foot, and I was confused for the first hour or so. It more or less came together, in wildly implausible fashion, in the end.
Posted by Steve Reed at 7:09 AM