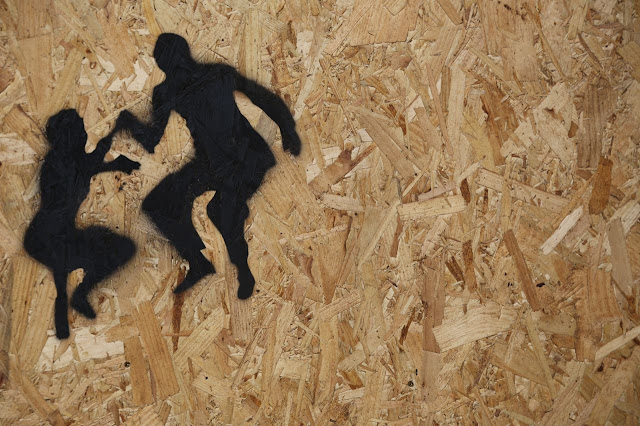 After two long days of meetings and familiarizing myself with people and policies related to the new job, I feel a little like these two people suspended in midair -- like I've been kept hopping. And the craziness continues today! I'm off early this morning to a staff retreat!

Starting a new job is always tense, even when it's a job that ought to be perfectly manageable. I remember when I started my last new job -- I was petrified the first few days in the office, and that was a job in journalism, my chosen field! This new position is in education, which is a whole new world to me. Yikes.

So far, so good, though. I haven't disgraced myself or made any major missteps -- at least, I don't think so. I've had to speak to two large groups and negotiate one minor snafu, the latter causing me to spend 45 minutes drafting a single, two-line e-mail. I wanted to craft it in just the right way, striking just the right tone, without appearing critical or bitchy or demanding or overconfident. I so look forward to the day when I know enough about my position and the people I work with to let all this second-guessing slip away. (I have to remind myself that not knowing is often the best place to be, or so say the Zen masters.) 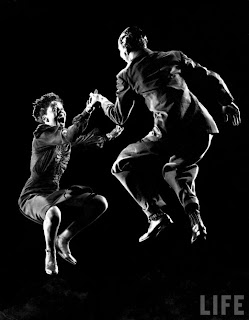 On second thought, I'm not experiencing anything like those two in mid-air. They're having fun.

The photo, of two dancers doing the Lindy Hop, is a famous shot by Gjon Mili from a 1943 issue of Life magazine. When I went walking on Portobello Road after work yesterday, I came across the stencil and recognized the silhouettes immediately. When your photo is so famous someone can turn it into a recognizable single-layer stencil, well, that's saying something!

I know this photo because it appears in a book I own called "The Best of Life," which I bought when I was in high school. I memorized every picture. I'm sure it helped me develop my own photographic eye -- not that mine is anywhere near as developed as the average Life photographer's. It definitely helped me see what a photo could do, preserving a fleeting moment, conveying joy or fury, documenting the culture. I own few things from that long ago, but I do still have that book!
Posted by Steve Reed at 5:42 AM