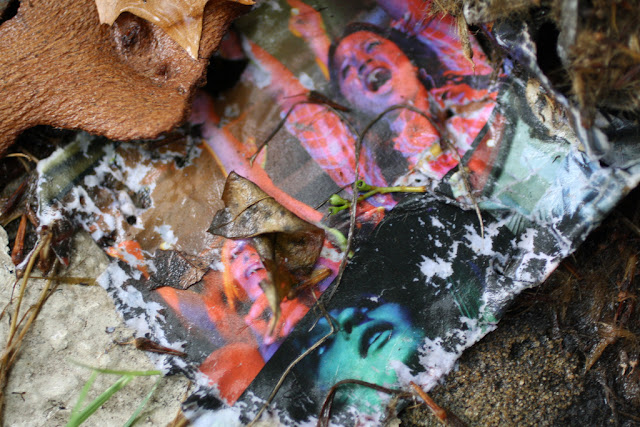 Elizabeth suggested on her blog that we open up a book of poetry and see what we find. I chose a book called "Poems of Our Time: 1900-1942," from the Everyman's Library, which I rescued recently from a Portobello Road market vendor known to me as "The Guy Who Breaks Things." He has boxes of stuff that he spreads out haphazardly on bedsheets on the ground, and at the end of the day he throws it hard back into the boxes, smashing the glass and the ceramics and anything else breakable. Most of his stuff is junk already, it's true, but I hate to see someone be so rough with things. My hunch is that he gets it somewhere almost free, brings it all to market, and throws away whatever doesn't sell in a day.

Anyway, I rescued this perfectly good volume from a stack of otherwise rain-warped, blotched, torn and unreadable books, offered for sale by The Guy Who Breaks Things. Here's a random selection.

The hop-poles stand in cones,
The icy pond lurks under,
The pole-tops steeple to the thrones
Of stars, sound gulfs of wonder;
But not the tallest there, 'tis said,
Could fathom to this pond's black bed.

Then is not death at watch
Within those secret waters?
What wants he but to catch
Earth's heedless sons and daughters?
With but a crystal parapet
Between, he has his engines set.

Then on, blood shouts, on, on,
Twirl, wheel and whip above him,
Dance on this ball-floor thin and wan,
Use him as though you love him;
Court him, elude him, reel and pass,
And let him hate you through the glass.

(Photo: Litter on the ground, Westbourne Terrace, London, last August 26.)
Posted by Steve Reed at 6:45 AM