That Tchotchke in the Window 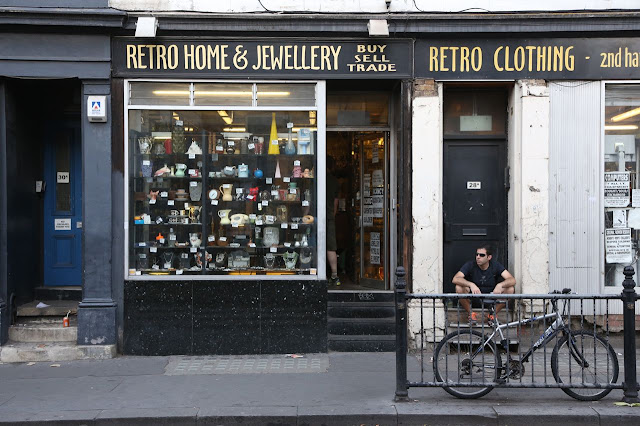 This is the shop window at Notting Hill Gate where our onion pot sat, lonely and unloved, for about a week before I came along and opened my wallet. The store looks cool, and they do have some cool mid-century stuff -- the kind of stuff I used to be able to find at Goodwill back in the 1980s. In truth, though, it's a bit overpriced, catering as it does to the Portobello Road tourist.

I check out the window every time I walk by, which makes Dave nervous. But I almost never buy. We have enough stuff to dust/pack/unpack/maintain.

Nearby are a retro men's clothing store, women's clothing store, book store and music store. I think all the shops are related, perhaps under common ownership. I once bought a groovy paisley shirt at the men's store, but I've never even been inside the book or music outlets -- I favor the Oxfam used book store on Portobello Road, which benefits charity, and who buys music in a store these days?

Incidentally, when the proprietors of this outlet say they buy, they're stretching the meaning of the word. When I went to the Alexandra Palace antique show back in March, I bought a German vase from the '70s, burnt orange with turquoise trim. I thought it would look cool and retro, but when I got it home it seemed appallingly ugly. So I took it to this store, and they offered just £3. I agreed, since I'd only paid £10, and I figured getting something back would be better than nothing. The vase appeared in the front window soon afterwards, priced at £15 -- and then promptly disappeared! Some people will buy anything.
Posted by Steve Reed at 6:14 AM