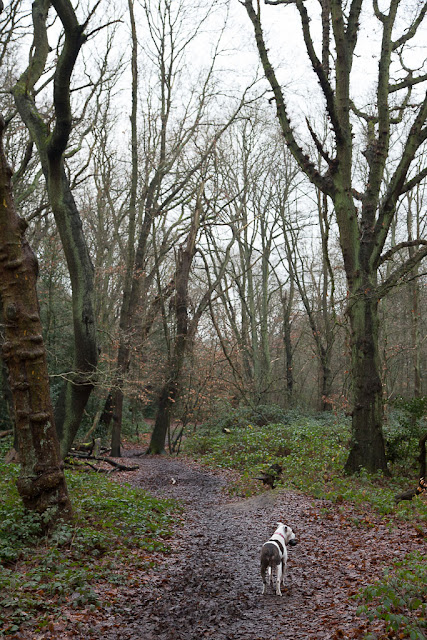 I spent yesterday morning archiving photos, a process that always takes a ridiculous amount of time. I sort through everything on my laptop, delete what I don't want and move both the original and edited versions of the good pics to a portable drive. (I also upload the edited ones to the Web.) Then I delete everything from the computer to make room for more. It takes hours.

Olga finally got her first Hampstead Heath walk of 2017. The weather wasn't great -- kind of chilly and cloudy and damp -- but she was in heaven. Lots of squirrel chasing, as usual. (When the dog-sitter dropped Olga off last weekend, she kept commenting about how much Olga loves to "hunt" -- a euphemistic way of describing what Olga actually does, which is crash headlong into shrubbery after anything that moves, catch nothing and whine in frustration at the bottom of trees.)

I hunted a bit myself, too -- I found an old milk bottle, marked "Express Dairy Co. Ltd." There's a corner of Sandy Heath, not far from where the photo above was taken, that must have once served as a sort of unofficial (or maybe official!) rubbish dump. Bits of trash are still in evidence. The bottle isn't dated, from what I can tell, but the Brent Museum has an identical one on its web site from 1909. I brought it home, ran it through the dishwasher and put it on the kitchen windowsill. (Is it kosher to keep old trash found on public land? I have no idea.)

After Olga's walk, we gave her a bath, removing not only Heath mud but hopefully whatever agent was making her skin break out last week. Her belly has cleared up entirely, but she did eventually develop some bumps beneath her fur -- hopefully those will disappear now as well.

(I know you all are just dying to hear about my dog's dermatologic conditions...)

Speaking of distasteful medicine, Dave's procedure (another euphemism) is today. He's done all the preparation, poor guy, so now it's just a matter of hanging around until it's time for the appointment at 10:45 a.m. I've taken the day off so I can go with him.
Posted by Steve Reed at 7:50 AM

Good luck and best to Dave and as far as keeping old things, hoarders do it, why can't you? I hope Olga's bumps clear quickly, poor dog!

Husbands (and of course wives too ;-) ), kids or pets, they're all family members who we have to take care of. I keep my fingers crossed for both, Dave and Olga!

Of course you can keep that bottle! (Says Mary who is in charge of nothing.)
May all go well for Dave. And Olga, too, of course.

public land, right? I guess the public can take what they find. I wish I had someplace like the Heath within walking distance.

Good luck to Dave. It's always nice to get that procedure over. I agree with everyone here, it's okay to keep what you find on public land. Unless you are in Arizona and want to dig up a cactus. Those are protected.
To answer your question on my site, I keep all my photos on a portable drive and I'm still using iPhoto to file and edit them. I usually file them by site or event like "Museum-PAM" for Phoenix Art Museum and "PHX-downtown" for pictures from the downtown area. the hardest ones to locate are from the Desert Botanical Garden. I file those pictures with the year and month they were taken and then for past years I usually go through them all and consolidate them to a file just for that year.(Sort of like this: DBG 2017.01 or DBG 2015) I have to admit, those are the hardest to go back and find something in particular. I just haven't been able to come up with a better plan yet.
When I post one on my blog, I change the label from what the camera assigns to the date it was posted. I don't use Flickr for storing all my photos. I only post a few to Flickr.

I hope things calm down soon on the Dave and Olga fronts. It's worrisome when your loved ones aren't one hundred percent. And, just wanted to say that when my husband takes the time to come with me for an appointment I'm dreading, it means so much. Most appointments I'm fine, but for the crappy ones (no pun intended) it's such a relief to have someone with me. So, I expect probably your company is much appreciated today.

I don't understand the procedures for processing photos. I do delete what I don't want before I download. They go on my hard drive and on picasa. I will have to look this up to see what has to e done.

Sure it's okay to keep rubbish from public land. And if it isn't just keep quiet about having it on the window sill.