Tropical Birds on the Frozen Heath 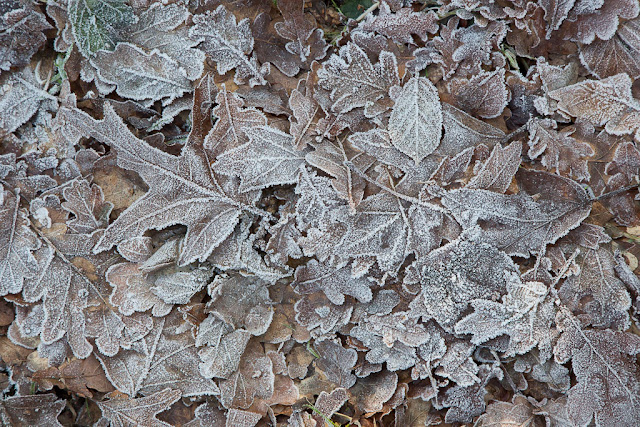 I had a great time yesterday looking at photos on Facebook of all the women's marches all over the world. The turnout was truly astounding and energizing. And with Trump being so thin-skinned about his popularity and ability to draw a crowd, it evidently gives him fits that the marches against him were so much larger than his inaugural gathering. (Hence the press secretary meltdown and Stalinist insistence on "alternative facts.")

Our challenge now is to continue to resist, in whatever ways we can.

Meanwhile, here at Shadows & Light, it's back to normalcy. For me and Olga yesterday, that meant a long walk on Hampstead Heath, which was blanketed with heavy frost. We're having a cold spell -- temperatures down to 28º F at night, and around 41º F during the day. 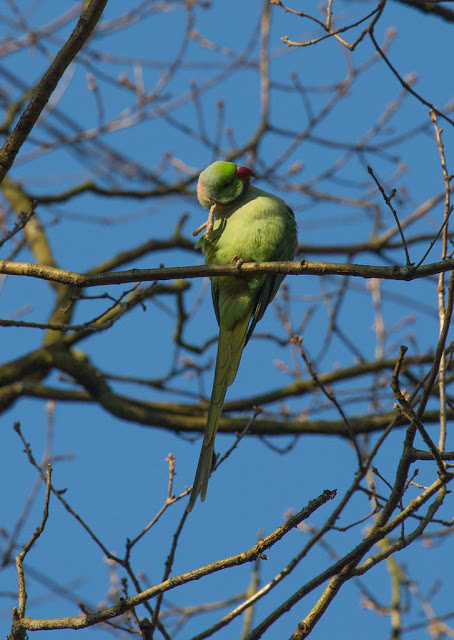 When Olga and I walked a week or two ago, we saw parrots in the trees -- they really stand out at this time of year, flashing bright green in a canopy that is otherwise devoid of color. I didn't have my camera then, but I had it yesterday, and sure enough we saw them again. As I've mentioned before, these are not native birds, but they seem to live quite comfortably in London, despite the cold temperatures. This one is scratching an itch on its head. 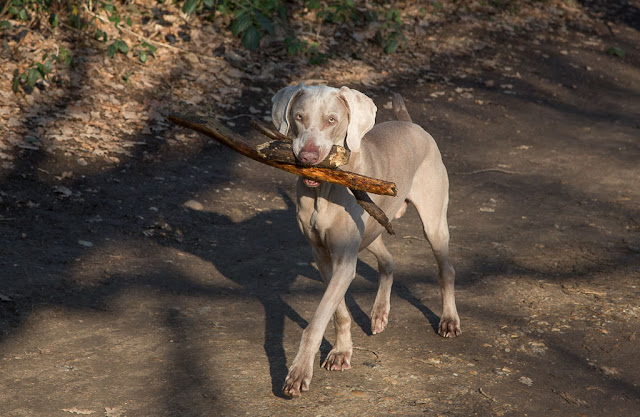 We also saw this guy, carrying not one, not two, but three big sticks. Right after I took this, Olga snarled at him, making him drop them all. I think she was a little freaked out by all that lumber. 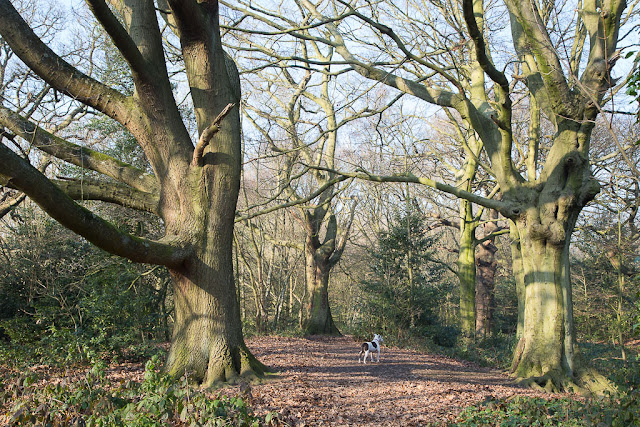 It was a good walk, about three hours, and the weather was beautiful. I can deal with cold temperatures under a clear sky. That's preferable to our normal wintry gray rain.

In the afternoon Dave and I debated going to a movie, but we couldn't decide on one -- I wanted "Manchester by the Sea" or something else dramatic, and Dave wanted "Passengers" or something else involving outer space. And the more we thought about it the less appealing it seemed -- sitting in a theater and paying to watch advertisements. So we stayed home and rented "Weiner," the documentary about Anthony Weiner and his attempts at a political comeback in New York. It was a really well made movie, but talk about a Greek tragedy! Sheesh. I guess I got my dose of drama.
Posted by Steve Reed at 6:30 AM

I love that last photo! Why waste your money at the movies when there is a whole shed load of drama out in the world? I got sick on inauguration day...lucky me.

I guess that the dog with the timber was building his own kennel. I loved the top picture of the frosty leaves. It would make a great wallpaper pattern.

I have a feeling we have plenty of drama ahead in the next four years. But not with a tragic hero, who is by definition basically good but brought down by one fatal flaw. Neither apply to Trump.

That whole press secretary debacle was unbelievable but, it had the effect of energizing the press to keep on their case. At least I hope it has. The follow-up conversation with Kellyanne Conway on Meet the Press was even more surreal.
I love seeing that parrot in your photo. It's hard to believe they can thrive in such a cool climate but it looks like they might be very adaptable. You have some great photos here today. I love the frosty leaves and what a cute shot of that dog with the sticks.

...and let me tell you 28 F ain't cold. We have minus 6 C here this morning which is pretty good for this time of year. so it's ll relative.

we have such a weird relationship with sex in this country. I spent the day Saturday while working at the antique store, watching the marches. so beautiful and uplifting, finally something to feel good about and yes we must continue to resist and express our displeasure at his government of hate. I love that picture of those trees. and what a handsome dog.

What a beautiful shot of the frosty leaves. And you made me laugh with your comment about Olga and the "lumber"!