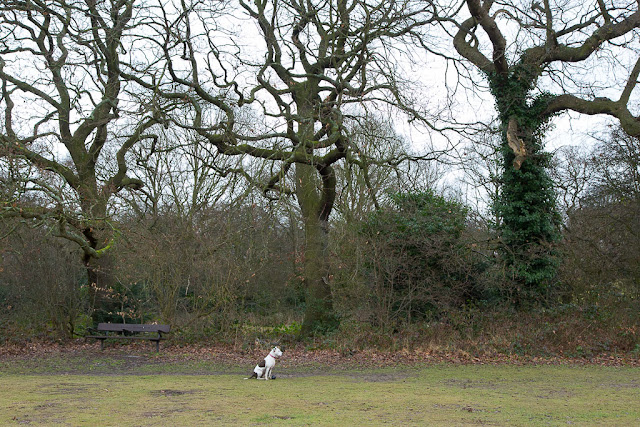 Olga and I were back at Hampstead Heath Extension yesterday. The weather didn't entirely cooperate -- it was gray and drizzly -- but Olga didn't mind. As I've learned, if you wait for perfect weather in England before going outside, you'll never go anywhere. 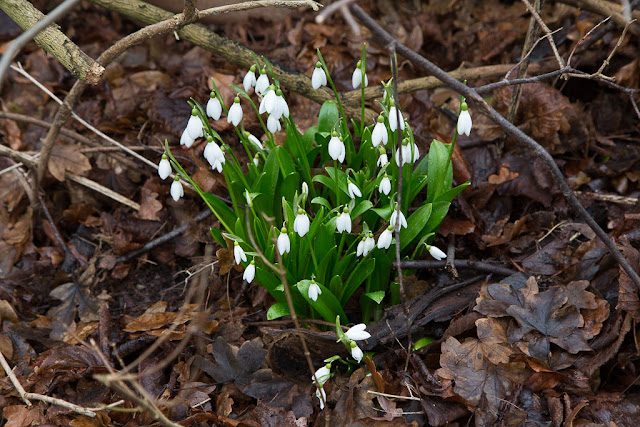 And though our garden is pretty dormant at the moment, elsewhere there are signs of life. These snowdrops were growing by the path on the West Heath. I photographed this same clump last year.

Dave and I made plans for a little trip with the dog next month. We're going to spend a few nights in Broadstairs, which is on the sea near the mouth of the Thames. We may be the only ones there -- I'm not sure anyone goes to Broadstairs in February -- but we thought it would be fun to visit a chilly, blustery beach. Olga has never seen the ocean, as far as we know!

I also Skyped with my mom and cleaned up around the house.

I'd like to say something about Trump's latest craziness, the capriciousness with which he toys with people's lives and hopes, the trauma he's inflicting on international relationships. I just can't bring myself to talk about it. I feel emotionally paralyzed. All I can say is, this is not the United States I recognize.
Posted by Steve Reed at 6:37 AM

No, it's not the United States that any of us recognize, and it's at once paralyzing and enraging. We're doing our best to resist, though, and I have hope that the power of the people will trump Trump. I don't pretend to any confidence that we won't fail, but I'll be damned if I won't resist in any way possible.

I don't think it's just Trump, but a whole circle of people supporting him in his actions, beginning with the VP. Can they all be brought down? Even if it can happen, it won't be a quick process.

Olga is a balm for the soul! I'm glad she will see the ocean and I hope she loves it.

Walking on the beach with Olga and Dave, you may receive broad stares in Broadstairs. I believe that Earl John Gray and The Prof know Broadstairs well. They could give you some tips.

Each day is more disgraceful than the last. And putting Steve Bannon on the National Security Council? Mind-boggling and frightening. This is not going to end well, and it will be at the cost of innocent lives.

I see that over a million people have signed the petition against Trump's UK visit. I can only imagine the protests that will occur (I"m sure the trip will go on as planned).

I am just glad that you'll be getting away. As crazy as everything is right now, as hard and as scary, I believe it's important for us to truly remember that there is still great beauty and wonder in this world, delight and joy. We have to.

What a wonderful getaway idea!

I had to look Broadstairs up on a map. That should be a very interesting place to go in winter. Something tells me that your description of chilly and blustery is a distinct possibility. I'm so worn out by Trump and his ill-informed and bigoted advisers.

a friend of mine moved himself and his nascent family to France 10 years ago. he saw it coming even back then. what's worse than Trump and his capriciousness is Congress who seems to be letting all this go without a peep. never thought I would see the end of democracy in the US. I'm afraid that with Bannon now on the security council he'll be calling out the national guard on protesters.

well, have fun on your getaway. having been at the beach many times when it is cold and windy, I don't see the charm but...

I understand that you may feel paralyzed but people are doing the right thing by protesting. They have to keep the pressure on this guy. Snow drops! Sorta like all Arctic flowers...very small.

And he had the nerve to blame the airline computers!

I have seen pictures of the lovely Snowdrops before but never the real thing. Thanks for the photo.

I know exactly what you mean about Trump. He defies rational belief.

the branches of these tree look like beautiful work of art!!!

the photo of flower surrounded by brown land is amazing!

how an most unwanted man cab be a leader of your country???
it means its not about voting it is simply about the so called hidden hands who wave the strings of puppets.