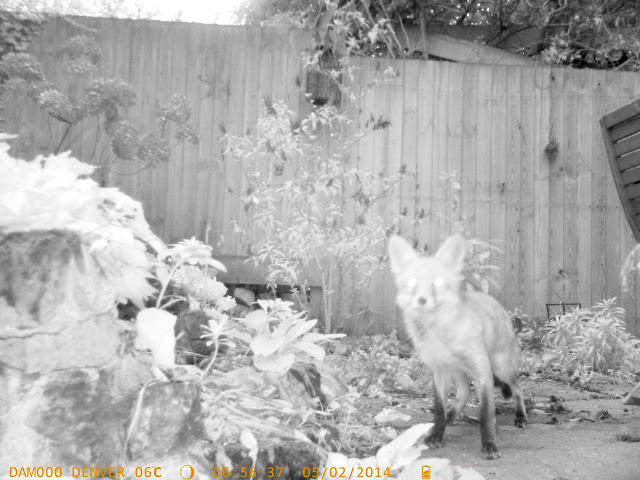 While we were away in Florida, I left the Garden Cam set up on the patio, where the fox (or foxes?) sneak under the fence from the neighbor's. We got about two dozen pictures of them -- they seemed very curious about the camera and were often staring or sniffing at it. 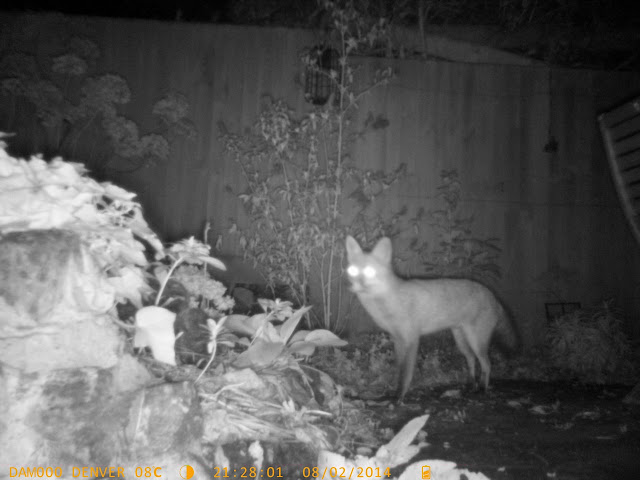 All the photos were at dusk or night, though -- which is why they're in black and white -- and they weren't very distinct. It's hard to photograph the foxes at this time of year because it's dark so much of the time. 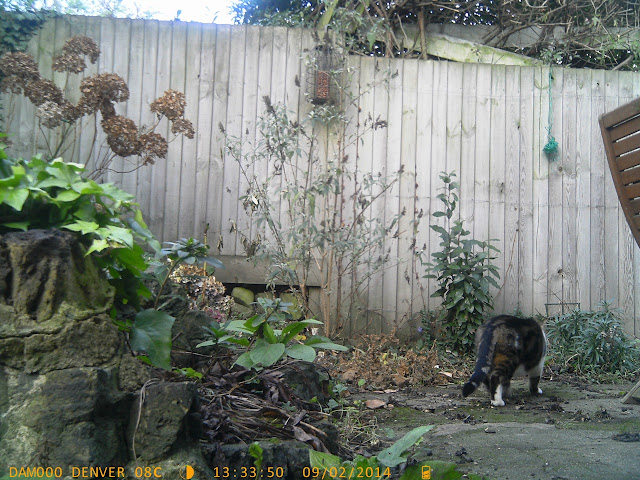 The only daytime critters that passed in front of the camera were a nonchalant cat... 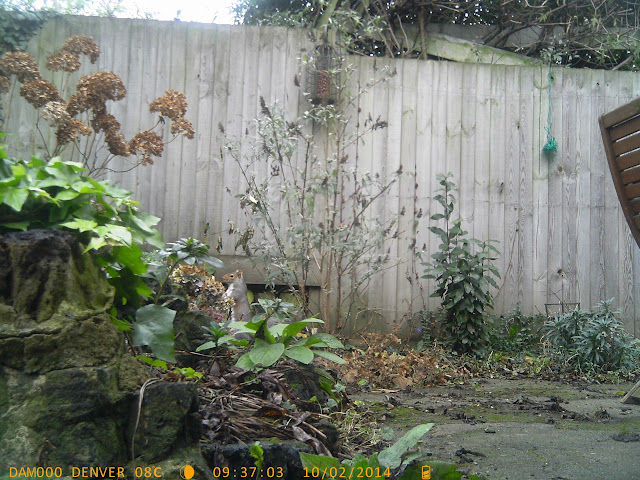 ...and numerous squirrels. Oh, and pigeons. While the cat's away, the mice will play -- in this case one mouse, slipping down the side of this rock wall like a backwards S. Do you see him? Middle of picture, about a third of the way from the right side. (This was after the foxes knocked the camera askew, an occurrence captured in a series of indistinguishable blurs.)

Fortunately, no two-legged wildlife prowled the patio in our absence!
Posted by Steve Reed at 6:23 AM

They did not do any harm...

Oh, I like the foxes! I'm not being critical of them at all.

It's like Planet Earth III. I can imagine David Attenborough's hushed commentary..."Here in the London suburb of West Hampstead, this neglected garden receives a whole range of visitors but tonight our camera team are expecting someone special...an aardvark."

It just occurred to me, does the camera make a noise when it snaps the foxes and wotnot? I had assumed it didn't but then wondered if that is what makes them interested in the camera.

SP: It makes a very quiet sound -- I can barely hear it, but maybe to a fox it's much louder!

I guess being away made the foxes come out and play. hee hee

It's so much fun seeing these. I kind of wish I had one of those cameras when I lived in the house with the big back yard. I know for a fact that cats used to roam the yard as if they owned the place. My friend Janet told me that she saw a coyote run across the road just up there street from where I live now one night after she dropped me off. I live up against a vast golf course and a canal runs right through the center of the area so I can see why some wild creatures might be living in the area.

I wish we could leave a camera up here after we move. Our new back yard isn't as secluded, PLUS there's a dog lot with a couple of large dogs next door. I don't know if they're there all the time, but I'm thinking they'll deter the wildlife. No more skunks, raccoons, ground hogs, bunnies... Or maybe it'll be like a zoo. We'll see!

That's a great tool to have!

The mere THOUGHT of a two-legged prowler gives me goosebumps! The animals, on the other hand, seem to belong there. Laughing at YP's comment and your reply :)

It is very nice to know who visits your garden whether you are home or away,
I'm glad that you had such a good family cruise for the holidays and Happy New Year.

Good eye on finding the mouse.

Youre garden is more alive than ours!
Happy new year dearheart,

That's some wild, spooky kingdom back there!