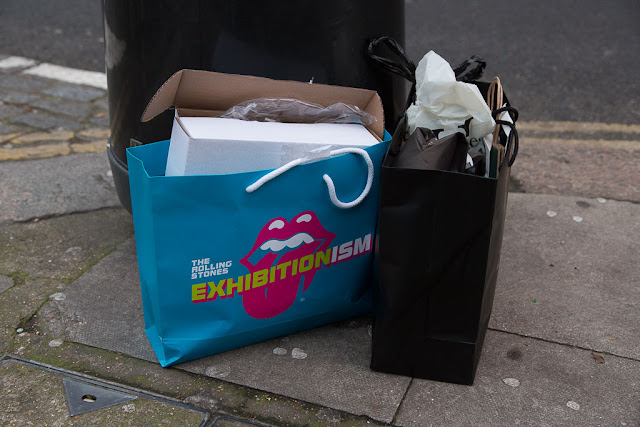 Olga and I came across this bag sitting beside a public trash can while out on our walk several days ago. Remember when I went to see that Rolling Stones exhibit? It was such a hot event here, and now it's moved to New York, I think -- and the bag has become anybody's rubbish. Oh, impermanence!

Dave's procedure (that euphemism again) took a bit longer than expected yesterday, but things went pretty much without a hitch. There were a few minor surprises but nothing serious. I know Dave was relieved when it was over and he was finally able to eat again. He finished around 2:30 p.m., and the poor guy hadn't eaten anything since breakfast the previous day.

I'd like to say we went out and celebrated with lobster thermidor, but we actually came home for tuna fish.

It was just as well we were occupied with all that, though, because there was a tube strike yesterday and apparently getting around London was a challenge. There was a lot of extra traffic -- the school where we work issued special directives for where cars could and couldn't go on campus, and poor Olga's dog walking outing was hours late. She wasn't even picked up until about 3:30 p.m., and she got home at nearly 7 p.m., well after dark.

In the interim it poured rain, but she came home dry so she must have been en route in the van when that happened.

Otherwise I worked yesterday on my other major archiving project (aside from photos), which is transcribing my old journals. Yes, I'm still at it. I'm up to June 1994. This will keep me busy for years, but I really like the opportunity to go back and reread everything, and to pair the entries with photos from the time. I've already used the blog search function to help me find events quickly -- something I could never do when all that writing was on paper. Having digital versions will be incredibly handy!
Posted by Steve Reed at 7:23 AM

A good friend of mine from college has moved to London from Paris and called me the other day, telling me about the tube strike. She said that it's much like Paris as far as strikes go!

And I deeply admire you for this journaling project that you're doing. How wonderful to match your writing with photos. Do you hope to make a book of it?

Tube strikes in London are unbearable, a wonder that you could manage the date yesterday. I truly envy you for the journal and these project is just great!

It's good to hear that all is well with Dave's nether regions. It is a relief that you didn't post any photos of his "procedure". Perhaps you are saving them for a day when you have nothing much to blog about.

Good for Dave! And now it's...behind him! Oh god! I am channeling Yorkshire Pud.
Someone threw away their Exhibitionism bag? Sacrilege!

I'm glad everything went well yesterday. I guess I've been lucky that I've never been there during a tube strike especially on a cold and rainy day.

I have a lot of hand-written old journals. Someday, I want to go back and type them up. That requires too much ambition for me at the moment.

Glad all is well with Dave. You should have swiped that bag as a memento for Ms. Moon!

It's always such a relief when an unpleasant event is finally over!

Did you know that lobster was so freely available here in the 1950s that kids were ashamed to take it to school in their sandwiches? It was the poor man's meat. How things have changed.

The procedure, everyone's delight! Erik was not given enough knock out drug so talked throughout in half drugged talk, it was hilarious! But the next time they overdosed him on knock out, difficult recovery. Glad all is well with Dave.Best wishes!

Glad Dave is fine. Maybe you'll share one of your old diary entries with us!