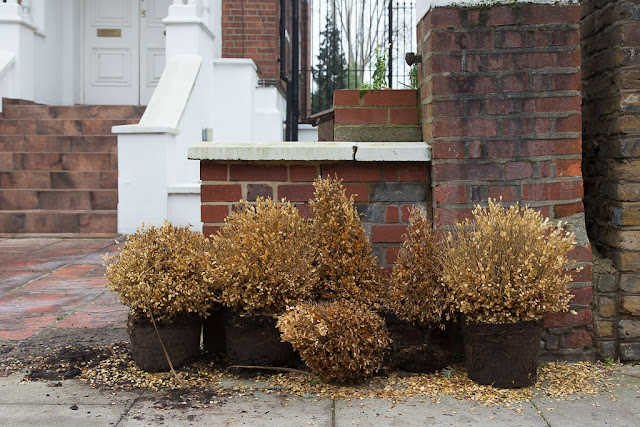 These are not our discarded shrubs. I passed them on my walk to work one day last week. They look so forlorn, don't they? Box shrubs will normally last a long time, so I don't know why these got thrown out, unless they simply weren't cared for. Or maybe they had box blight.

I just realized that around this time last year, we had flowers in our garden. The daffodils were up, and a few early grape hyacinths were already starting to appear. Crazy! This year we haven't seen anything floral yet. The daffodils are tiny shoots just coming out of the ground, and I don't know what happened to our winter aconite -- I haven't seen it at all. I think maybe the squirrels ate it. 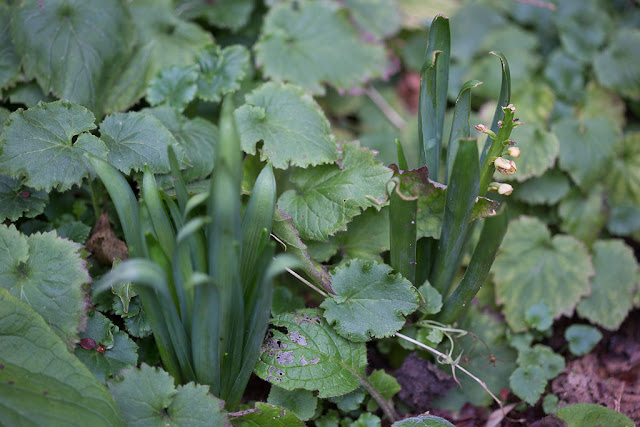 We do have some sprouts in the front garden, next to the steps. These are the bulbs from the yellow hyacinths that our friends gave us last year. I stuck them in the ground and more or less forgot about them, but there they are, faithfully making their way. It looks like something already nibbled the flower stalk on the one in back. Are there snails out there at this time of year?!

I forgot to mention that I recently saw a boy at school wearing a blue "Reagan/Bush '84" t-shirt. I think he meant it as a subtle comment on the sad state of today's politics, but I'm not sure -- he was born in 2000 or so, and the Reagan/Bush races would be ancient history to him. I said, "Wow, that's a blast from the past!" Thinking it might have belonged to one of his parents, I asked him if it was an original shirt.

"He wishes," said his friend, sitting nearby.

I didn't tell him I voted for Mondale, though I'm still proud of it.
Posted by Steve Reed at 6:47 AM

You suck sprouting hyacinths? I hope your neighbours don't spot you when you kneel down to do this Steve. Here in England, sucking garden plants is usually frowned upon but I say hell... whatever turns you on!

I couldn't imagine that anyone would want to wear a Reagan/Bush t-shirt but apparently there is a retro market for them!

SP: Who knew? Specifically, he was wearing the royal blue variety, not the navy.

Each year is different when it comes to plant development. Was it colder this winter? It'll be another two months before I see any daffodil shoots.

I still can't believe things are popping up out of the ground there.

Does this mean your winter is almost over already? No fair!

On the other hand, our snow disappeared under the onslaught of rain a week ago and there is nothing major in the forecast. I should look for bulbs coming up when I am outside today!

I do believe it is spring here, a month earlier than last year and last year it was a month early. did see one clump of daffodils coming up.