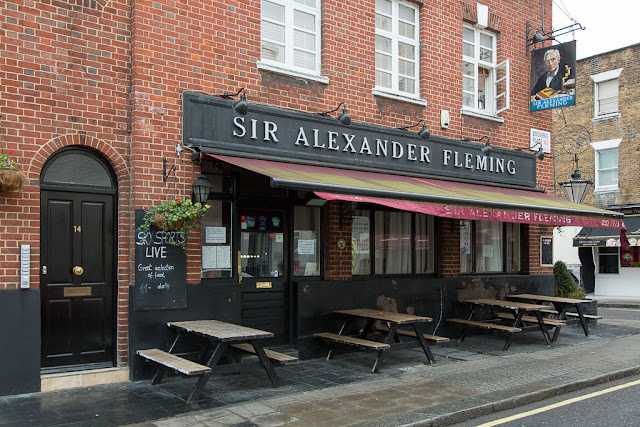 I had to go to St. Mary's Hospital in Paddington yesterday for a medical test, and I was amused to find this pub a few blocks away, named after the founder of penicillin. Sir Alexander Fleming did his groundbreaking work in a lab at St. Mary's, which is now preserved as a museum. Unfortunately, it was too early for a pint, so I didn't get to patronize the pub.

I was at the hospital for an ultrasound. This all relates to my gastritis problems, which I've mentioned here before. Early last year I began having achy pain in the lower left side of my abdomen, which comes and goes for days or weeks at a time, sometimes with other symptoms like fatigue. It's the reason I had that colonoscopy last summer (in addition to the fact that I was way past due for one).

Well, the ultrasound was normal. The tech seemed impressed by my slimness. "Do you work out?" he asked. I wondered if he was trying to pick me up, but no -- he was simply marveling at my lack of an abdominal fat layer, without which he could "see" my innards quite easily. I do not have gallstones, among other positive discoveries. "You've got wonderful organs!" he said.

In terms of the pain, the docs and I are sticking with the idea that it's some combination of occasional gastritis and/or mild IBS. 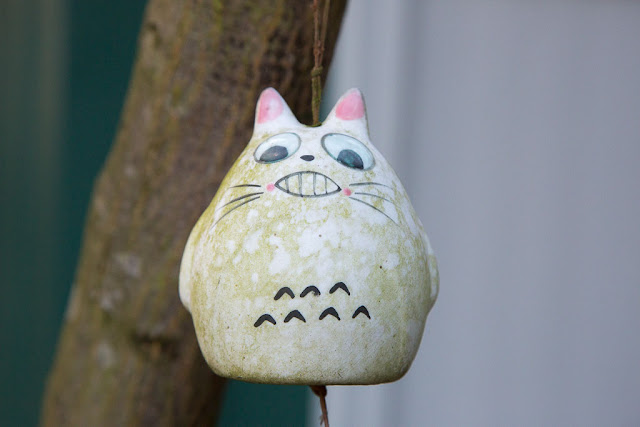 After the ultrasound I walked for a couple of hours around the lower part of Edgware Road, taking photos. The sun was out and I got enough to keep the ol' blog afloat for the coming week -- always my goal!

I came back home for lunch and noticed that Totoro, the Japanese forest spirit in our garden, has developed a greenish outer layer. Perhaps he's trying to conceal himself.

I also discovered that our geraniums have something called pelargonium rust, which is why they don't look so great. We'll have to either throw them out or buy an anti-fungal spray. Decisions have not yet been made.

Finally, we had our former neighbors Chris and Linda, the Brexiteers, over for dinner last night. We had a few politically fraught moments during the dinner table conversation but nothing serious. In fact, they expressed approval of my recent marching against Trump! Dave made butternut squash soup and cottage pie, and everyone parted ways on speaking terms -- a successful dinner party, in these challenging times.
Posted by Steve Reed at 9:22 AM

I wonder if "The Sir Alexander Fleming" specialises in penicillin-themed beverages and snacks. Also, it's nice to know you have great organs. Will you be posting your ultrasound scan images?

Years ago I used to visit the Dept of Health at Alexander Fleming House, a 1960s building best described as 'brutalist' close to the Elephant and Castle tube station. Which thought has the slenderest link to your post, but it did bring back that memory!

Did you explain to Mr. Nosey that you walk everywhere and therefore are not as chunky as the average American or British person? Glad to know it was nothing serious.

I had a fatty liver when I had one!

Stress. Stress. And more stress. I bet that's what's going on. You have, as so many of us do, Trumpitis.
That's my diagnosis.

nice to know everything looked good inside but not especially helpful. things are continuing to melt down or blow up over here, I'm not sure which. Trump, by all the leaked accounts, is totally unstable and China is preparing for war. yippee!

I'm so jealous of that "no abdominal fat" statement. That can't be said about me. I'm in agreement with Ms. Moon. It's most likely stress related. In fact, I'm going to call it Trumpitis when it strikes from now on.

It's reassuring to know the u/s is normal and I agree there is a severe outbreak of Trumpitis both here in the U.S. and around the world.
I dread listening to the news.

It must have been a great relief to get clear ultrasound results. I always feel on top of the world after I've had a procedure of any kind and it shows nothing out of line. It only lasts about a day, but it feels good :)

That was indeed a successful dinner party!

Investigative procedures that turn out showing nothing are a great relief.

Maybe he was trying to pick you up.