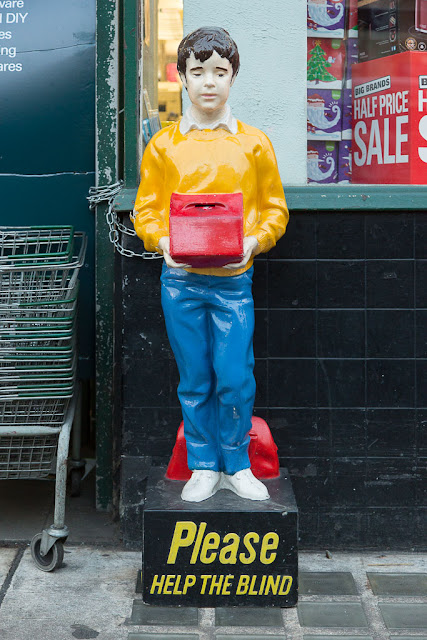 I've got to be at work early once again -- my colleague is still out sick -- and I just finished showering and shaving. Olga is sitting beside me on red alert because a fox is yipping in the back garden, but it's still dark so we can't actually see it. I've got to get the trash out for collection and walk her before I go in at 7:30 a.m.

We made it to the student concert last night, at the Barbican Center, and it was great -- a Shostakovich symphony and a viola concerto by Schnittke, who I don't recall ever hearing before. The latter piece was a little avant-garde for my taste, but skillfully played. Dave's student, who had several prominent parts, performed well on the oboe.

Today I've got to do my annual dog-and-pony show for the 8th graders about interviewing -- apparently my longtime career as a newspaper reporter qualifies me as something of an expert. (I have my doubts about that, but yesterday I read several articles about interviewing tips and they were all things I'd say anyway, so maybe I really do know what I'm talking about.) I'll be speaking to two classes. I originally had two more to cover on Monday, but Dave will be out that day for a colonoscopy and he needs me around to bring him home -- so we're going to record one of my presentations today and play the recording for Monday's classes.

(Photo: A contribution box for the blind on Finchley Road, similar to a smaller one I photographed a few years ago on Edgware Road.)
Posted by Steve Reed at 6:36 AM

Best wishes to Dave! How has he solved problems with the Crohn's disease in everyday life?

If not you, who could tell the students about interviewing? I'm sure you do a good job!

Good luck to Dave on his procedure. Colonoscopy prep is so draining.

And good luck to you on your presentation. Sometimes we don't realize how much we know that someone else may not - it's old hat to us, but it's enlightening to others!

I hope all goes smoothly for both of you, and yes, you are an expert. I've done similar presentations and the questions are always interesting.

Do all blind kids wear yellow jumpers?...That would make a good interview question but how would the blind kid know?

Amazing how fast one must jump back into real life.
I hope all goes well for Dave. I have heard from an expert that CBD is working wonders with Crohn's.

I've never had a colonoscopy and don't plan on getting one. no way would I be able to drink that stuff without throwing it all up.

I was amazed at how unfazed I was by my colonoscopy. I was lucky because I didn't have to drink everything at once for some reason - made it much easier. But I don't envy Dave (or you for that matter!).

I'm really bad at assuming that people know the same things I do, then I'm all shocked by my so-called expertise. But you actually ARE good at this, so I'm glad they're utilizing your skills!

I love Shostakovich so I bet I would have enjoyed that concert. Good luck with the presentation. I'm sure it will be great.

Your life gets busy and complicated. Now colonoscopies? I hate em! So I hope Dave survives again. I see the bug tells us there's a way to get around drinking all the crap.

As busy as you seem to be, I think you earn all of your wonderful vacations.

He looks like barry from land of the giants