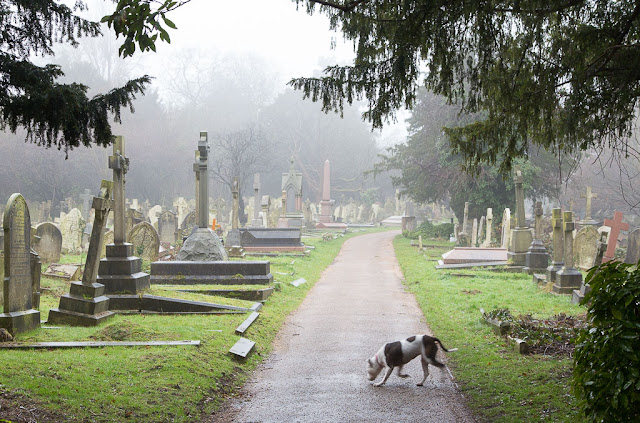 Yesterday was exactly what I needed -- a day at home with lots of reading material. I finished one book, started another and squeezed an issue of The New Yorker in between the two. It was the Christmas issue, one of those where virtually every article is interesting, and I learned all about a landscape photographer named Edward Burtynsky and a new TV show called "Search Party" that I think Dave and I will try. And Hulk Hogan's lawsuit against Gawker, which may have implications for serious journalism.

I also managed to go to the cleaner's and take the dog for a long walk around the cemetery. In the evening, Dave and I binge-watched the final three episodes of "Eyewitness," which I would describe as an involving but pretty seriously flawed show. We found ourselves saying "No way!" over and over, each time a character did an extremely improbable thing -- which happened often.

And that was pretty much it.

Today I'm going to try to be a bit more ambitious. 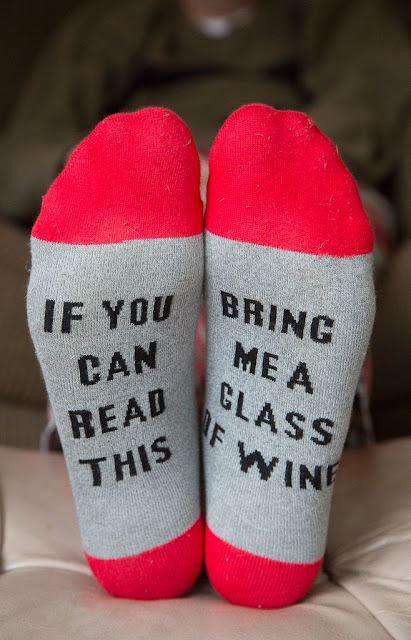 But not hugely ambitious.

(Photos: Olga at the cemetery yesterday, and a pair of socks Dave's sister gave him for Christmas.)
Posted by Steve Reed at 8:19 AM

You visited the cleaner's premises. Only one cleaner there then?

Well, that would not take much...Enjoy your wine!

Love the socks, but do you have to take your shoes off and put your feet on the table, when you want to order a drink !!!,

That Hulk Hogan article was a bit nausea-producing, wasn't it?

A glass of wine for me, please, whilst I'm walking aroung this beautiful cemetery.

OMG....I love those socks. Those are great. I also love that foggy look at the cemetery. That is the perfect atmosphere for an old cemetery.

Well, you know exactly what to do to have a good day. I should spend more time reading.

Sounds like a great way to spend the weekend. Great socks!

I can't watch unrealistic shows, they make me too snarky! Probably why I don't watch TV anymore :)

That's the second pair of socks with that slogan on them. And both of them in England!

That's all the ambition a person needs on a Sunday evening - enjoy!

Loving Olga in the cemetery.