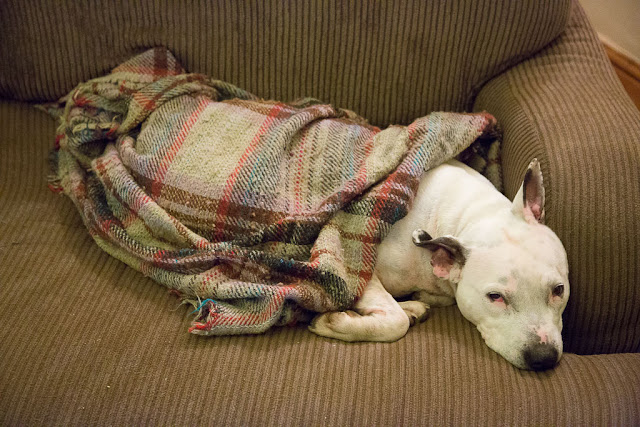 Olga is home. She arrived yesterday afternoon with a mysterious rash on her chest, but otherwise lively and full of vigor. (I'm guessing she'd crashed through a patch of nettles, or something comparable, in pursuit of a squirrel.) I took her immediately into the back garden for a round of Kong chasing, and then she came inside, made a nest on the sofa and slept for hours.

I think she's glad to be here.

Surprisingly, I don't have any reports of great mischief on her behalf. She did apparently hunt incessantly (and fruitlessly) on her walks, but that's no surprise. 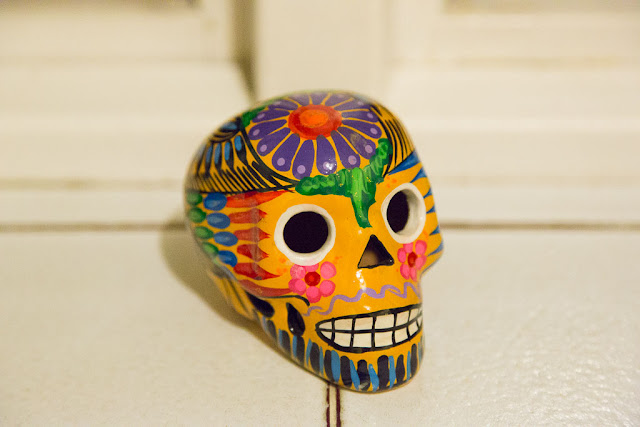 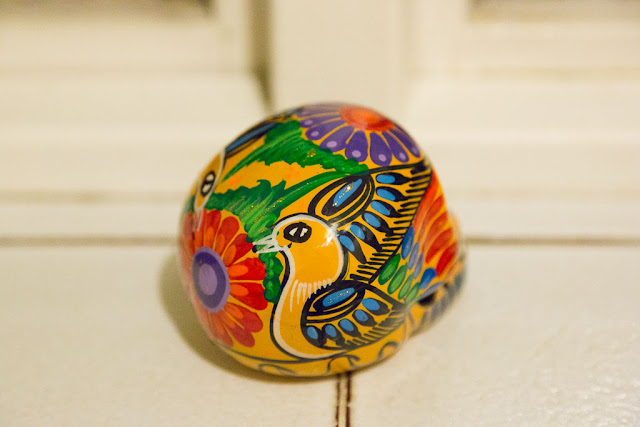 My Mexican pottery skull from Cozumel, which we have nicknamed Ernesto, also survived (?) our vacation, and transportation in my checked luggage. He's now on the living room windowsill, easily the most colorful non-sentient being in the room.

Dave had a challenging day yesterday. On the way back from the airport, he tried to withdraw cash from an ATM to pay the dog-sitter. Instead, the ATM decided to eat Dave's card and then declare itself to be malfunctioning. (Too little, too late!) Dave called the bank in the taxi on the way to the house, and today he has to visit a bank branch to present ID to get a new card. I swear, Barclay's has it in for him, and we have no idea why. We share an account, and yet I never have any trouble. I later used my own ATM to withdraw money for the dog-sitter, though we couldn't get enough for the entire bill because Monday was a holiday and there's a daily limit on how much one card can withdraw.

Bureaucracy. I hope Olga appreciates all this effort. I suspect she doesn't.

Also yesterday, I finally gave Dave his Christmas presents. I got him a gift card to a local cookshop (for kitchen things) and bought him what, in retrospect, is an astonishingly insensitive cooking device. I found an updated, yet kind of retro, Swiss fondue pot -- and only belatedly remembered he's more or less stopped eating cheese because of his dietary sensitivities. Good grief. I'm a terrible person! But he thought it was funny and pledged to use it anyway.

The suitcases are unpacked and the laundry is done. As happy as I am to be back to routines, I did feel a burst of post-vacation sadness as I lay in bed last night. Our cruise with family was such a great adventure, and one that would be impossible to coordinate again -- especially with my little nieces growing by the minute, and the Moons and all the other participants. It was a once-in-a-lifetime event, for sure.
Posted by Steve Reed at 6:23 AM

I need to catch up as you're already back and I've hardly read anything of your trip! Dave can make CHOCOLATE fondue, I'm sure, and what about the old-fashioned kind for meat in oil?

Agree with Elizabeth -I was thinking chocolate fondue, and the meat in oil, too ! Shame about no cheese though !
Olga does look nice and cosy, and happy to be home.

You can fondue ANYTHING as long as the oil is hot. We love to use chunks of zucchini, aubergine and small mushrooms. Also bread cubes can turn out totally fab. Plus dips! Enjoy!

I don't know what Dave's views are on meat but thin pieces of steak cook well in a fondue. Alternatively, he might consider dipping his ATM card!

My parents used a fondue set forty years ago for parties---chocolate, bread, fruit, whatever but no cheese. Have fun experimenting!

I'm glad to see Olga back home safe and sound and snoozing. I know what you mean about returning from a vacation. It's always good to be home but there is a certain melancholy for freedom of a good vacation.

Didn't James Taylor once sing, "Isn't it nice to be home again?"

I kind of felt that way when I returned from Scotland. glad to be home but...

I too enjoyed your vacation!! My parents are in the Tampa area, and have taken to cruising late in life (something they swore they would never do), so I really liked looking at your photos and reading about your adventures in FL.

Ernesto is extremely handsome. And Olga looks exhausted. No wonder she slept a long time.

Olga is a homebody at heart:) It always slays me to see a dog tucked in with a blanket. Cats don't do that, at least ours don't.

Chocolate in the fondue pot, perhaps?

It's always nice to get back home. Sometimes modern technology can be a royal pain.

You know, I didn't really think about all the other kinds of fondue we could do. So thanks for the ideas, everybody! I've always thought of cheese as the dominant fondue type for home preparation.

YP: I think it was John Denver!