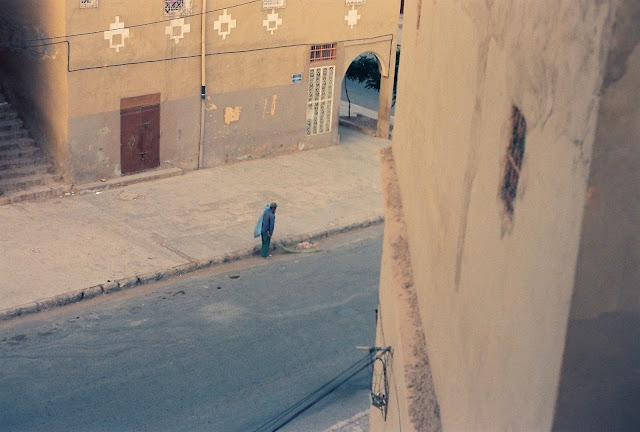 This is one of my old photos from Morocco. I came across it on a roll of negatives while looking for something else. I don't remember this picture at all and my guess is I threw out the print, because -- let's face it -- the subject IS really far away! But on seeing it again I decided I kind of like it, with the downward angle and intersecting lines.

I think it was taken in Ouarzazate, in south Morocco, in May 1994. I was interested in the street cleaner, who was using an old palm frond to sweep up trash. 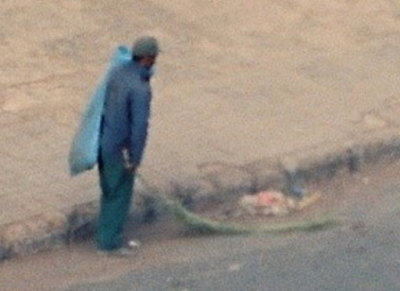 I could probably get a clearer image with an enlarger, straight from my negative. But here's what he looks like in the scanned version.

Dave is sick, this time with a cold. He came home early from work yesterday and he's coughing and snorting like crazy. He says he feels terrible. The poor guy just cannot catch a break!

Also, I had to do some more "trash intervention" yesterday morning. Our upstairs neighbors threw away a big garbage bag full of branches from a Christmas tree -- in our trash can. Well, as you can imagine, it completely filled the can. Christmas trees are recycled here in Camden borough, so I pulled the bag out of the trash and lugged it to the recycling site (Fortune Green) yesterday morning, dumping the branches into the tree enclosure. Now, at least, we have room for actual trash in the trash can.

We've been sucked in by a new TV show -- "Search Party," with Alia Shawkat. I saw it reviewed in The New Yorker and decided to give it a try. We've binge-watched six episodes and we love it. Having lived in New York as a young(ish) person, I appreciate the youthful urban sensibility.

And speaking of urban youthfulness, I was shocked to learn over the weekend that my pal Peter -- who I met up with in Paris almost four years ago -- died about a year and a half ago! I don't know how I missed this news, except that most of the people we know in common aren't on Facebook and I hadn't corresponded with him or his partner Katherine in some time. (We're not close friends, as you can tell.) I debated what to do -- was it better to say nothing and just move on, or get in touch with Katherine and let her know I'd just heard? At the risk of reopening old wounds I did the latter, via e-mail, to express my surprise and condolences. Apparently he had been ill but I don't know the specifics. I haven't heard back from her, and I may not, but I thought I should at least let her know why I hadn't said anything sooner.
Posted by Steve Reed at 6:14 AM

Sorry Dave is under the weather, and very sorry for the loss of your friend. He sounds like a lovely guy.

So sad to hear about the loss of your friend. Even today, with all these social media around and mobile devices around us, we seem to loose sight of somebody.

Great photo! Wonder whether they sweep the street the same way nowadays or they use modern brushes.

Someone put a Christmas tree in your bin? That is outrageous. And you should not have had to cart it away. I would have taken the tree up to your neighbour's flat and shoved it up his..... (CENSORED by BLOGGER CONTROL).

One of the things I least like about this time of year is all the viruses going around. I hope Dave feels better soon, and that you don't catch it!

For whatever it's worth, I think you did the compassionate thing to let your friend's partner know the situation. I don't think sympathy is ever mis-placed, even if it temporarily brings up sad emotions.

I love the shades of blue in that street cleaner's outfit and the broom reminds me of the handmade brooms that we used in Seychelles.

Hope Dave recovers soon. My man has been coughing since before xmas. I think teachers get hit by the heaviest viral loads, all those hands on door handles and any surface, poorly aired rooms and dry central heating air. How do they survive?

I like the picture. we are so spoiled over here in America and Europe. a palm frond for a broom.

I like this photo too! I wouldn't think a palm frond would be a very efficient broom but I see he does have a nice little pile in front of him. Sorry to hear of Dave's cold. I hope he can get rid of it soon. And, sorry to hear of your friend. I remember that post about the day trip to Paris.

All the best to Dave for a rapid recovery. Colds aren't nice and coming right after the event it's not nice at all.

Feel better Dave. My household has been fighting that cold too. I don't think I'd have taken the tree branches to the proper place. I think I might have left them on my neighbors' doorstep, knocked and explained where they needed to go. Your solution was better for everyone's pressure I'd wager, and I salute you for your generosity of spirit! I'm really sorry to hear about your friend.

Oof - I'm with YP. Or at the very least I would have taking it OUT of my bin & put it on top of & around the neighbor's bin. But I'm passive-aggressive mean. Whereas you're just nice. I should start thinking WWSD? :)

Hope Dave is on the mend soon. I keep thinking I'm getting a cold - but I only feel poorly in the evening. What the heck. Allergic to bed time?

A palm frond is brilliant, nothing to recycle, and it has a broad sweeping that is more efficient, it bends, and when it is tired it retires back into nature, brilliant.The flu has killed 24 already up here in the PNW. Take good care of Dave!Take good care of YOU! Sent a package to Olga yesterday. Should be there next week sometime.

I think you did the right thing in emailing Katherine.

That picture of the street sweeper is great!