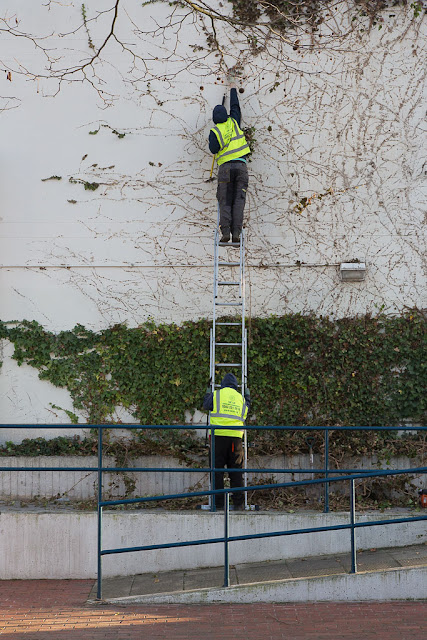 These two guys were cleaning ivy off a wall on my way to work one morning. Looks like they've made substantial progress! English ivy is crazy stuff. It just consumes everything.

I learned earlier this week that there's going to be a Women's March in London tomorrow -- open to people of all genders. So I'm going to go. There are several people from work attending so I think I'll tag along with them.

I debated whether marching against a democratically elected president was the right thing to do -- especially right out of the box, when he's taken little official action. But we can all see where this is going. And no, this isn't simply a matter of being peeved about losing an election. I've voted for losing candidates many times -- more times than I'd care to admit -- but I never marched against any of their victorious opponents. It's not just that I don't like Trump -- it's that he's said and done things that endanger my fundamental values and our future on this planet. I genuinely believe that he and his strain of anti-intellectual leadership threaten life as we know it.

So, anyway, we'll see how that goes. I haven't been to a political march in years. While I worked in newspapers I was basically unable to participate, having to maintain a veneer of public objectivity about political matters. Now, thanks to my career changes, I have more freedom!

We thought about showing today's inaugural activities on the library TV, but the ceremony itself begins right when we close, so I'm not sure we'll have anything to display. Still, we'll probably experiment with that. I may not like Trump, but he is the nation's next president, and today is history being made, for better or for worse.
Posted by Steve Reed at 7:02 AM

Good for you for marching!!! Please post about your experiences. I will not be marching but wish I could...

Thanks for marching. I've been on a couple of marches in London in the 1980s and the buzz alone was uplifting in the midst of whatever gruesome campaign - anti-apartheid, miners' rights, cruise missiles, all the cold war frights.
Hope it will be a good big crowd.

I will be with you in spirit on the British march that parallels - albeit in a small way - the big women's march on Washington. Remember to swing your arms like a soldier.

Thank you, Steve, for marching. I have friends going to the march on Washington and I wish I could go, too. Unfortunately, today my husband is having a colonoscopy and the buses from my area leave tonight. I will be with them and you in spirit! I'm proud of you all!

And I won't be watching the inauguration. I can't bear it.

I also won't watch. (And I think this is the first I have not watched at least part of the ceremony, in fact, regardless of who I voted for.) I echo all that you said. And good luck at your march!

As one of the so-called Remoaners, you've answered a question that has occurred to me - did the American people feel so strongly when their preferred candidate didn't win previous elections. The answer is not it seems. Good luck with the march and I will be with you in spirit.

I am proud of you.

there is a march in Houston, the city I lived in most my life, but I won't be going. I've marched on Washington before, against the Viet Nam war, but it's been a long time. What I did do though is sponsor a woman to march on the capital. it is history in the making especially if this proves to be the turning point in our democracy that we all fear but I'm still not going to watch that thin skinned narcissist take an oath he has no intention of honoring.

Thank you Steve and all the Londoners marching tomorrow. If I was younger and more able I would go to Washington. I will watch their march if televised but I cannot watch this inauguration. I hope it pours on his parade and supporters. The skies will be weeping along with so many in the USA.

Steve, thank you for marching! I feel that is a very patriotic thing to do. I'm not going to watch the inauguration either. I just can't. I've watched every one before this but this one is too distasteful for me.

I think there is a powerful message to be sent with the number of people marching around the world. No doubt about it - we are living history, as you said.

March for rights, it's the least we can do. Wear a pink hat if you can find one! My Ivy heart was torn out yesterday as well. Invasive, controlled but I guess it held too many dead rats and broken bottles. and the building must be saved.

Yes, by all means get out and walk. This guy isn't going to change just because he's sworn in.

I'm glad that you are marching, too. I wish that I could get to the march in D.C. or even to one closer to me in eastern Canada or the U.S., but I cannot leave my ill husband alone right now. My daughter, who lives near D.C., is marching, which makes me proud of her and at the same time more than a bit worried for her safety. I have been literally sick since the election--sick at heart and sick at my stomach. I've been reading so many hateful comments on newsfeeds from Trump supporters that I fear what they may do tomorrow in the U.S. Is there less fear of retaliation outside of the U.S.? Regardless, take care.