Mildred and the Heath 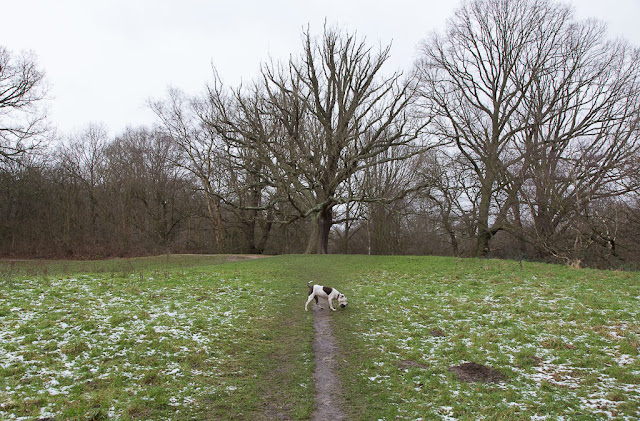 Well, the snow never turned into much. We literally had about half an inch and you'd think, from the news coverage, that we'd been slammed by a blizzard. There were transit problems and photos of thousands of people standing around rail stations trying to get home.

Olga and I had no trouble going to Hampstead Heath yesterday, even though it wasn't the best day for a walk. It was cold and wet. 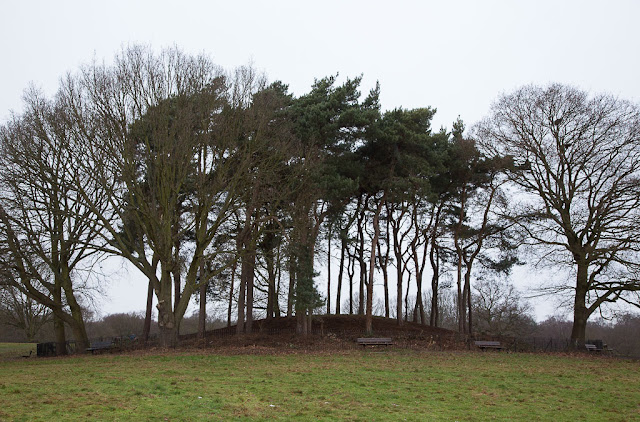 Remember the Tumulus, which I posted about a few weeks ago? It's been completely cleared of brush, and now we can see the underlying mound. I've never seen it so visible. It's nice, I suppose, but seems like that brush would have been valuable habitat for critters.

I spent the afternoon at home, watching Joan Crawford in "Mildred Pierce," which I hadn't seen for decades. I remember it being distastefully melodramatic, but I actually liked it a lot this time around. It's a good movie, and the cinematography is impressive, with lots of dramatic shadows designed expressly for black-and-white film. Very noir.

I also set up my Christmas presents from Dave. He got me two web cameras, which we can use to monitor the house (and Olga) in our absence. He thought it would be fun to be anywhere in the world and dial up an online image of our living room. (In theory, we could even speak to the dog through the camera, though I think that would freak her out more than comfort her.) We got one of them working, but the other one just won't cooperate. I think it may be fatally flawed.

I did hear back from my friend Katherine, who I wrote about a few days ago when I learned belatedly of the death of her partner Peter. She seemed happy to hear from me, even after such a long lapse of time. I'm glad I contacted her. It was the right thing to do.
Posted by Steve Reed at 7:49 AM

The tumulus looks very similar to others I have seen in Derbyshire and they are definitely ancient burial mounds - many of them were investigated by amateur archaeologists in the 19th century and lots of "finds" were made - from bones to personal items like combs, hairpins, beakers etc..

I would go along with YP's theory though it is hard to believe that no-one has carried out a dig on the site to find out. The City of London obviously think it is an asset to the health but I suppose they can't fund and archeological dig in these straitened times.

So similar to our Indian mounds here. Some were midden mounds.
Yeah- that snow storm was fierce. Glad you survived!

The trees atop the tumulus are so artistic. Looks like a good place to do magic. A metal detector would be fun on your walks, who know the mysteries you could uncover.AND possible strike it RICH!

I'm glad you contacted your friend...Mildred Pierce is a favorite of mine as well. Happily, you and the dog survived the snow...Do you enjoy the change of season?

Your walk on the Heath looks very cold to me but, as you know, anything below 65 is cold to me. How on earth did I spend 2 years working in Chicago? I guess I got acclimated. My friends Julie and Dave have a set of those cameras for their house and I have another friend who also has them so he can watch his dogs during the day. They all seem to like being able to check things out wherever they are.

Weather is relative. It's what you get used to. Cold and damp is miserable.

I'm with Red - I think cold and damp is the worst combination possible!

I think a webcam is a great idea, but not so much the talking to Olga over it ... It might give her a complex!

It's often fun to watch people react to weather they've never experienced while we "professionals" laugh and just go on our way.

Our neighbor installed one of those cameras before they went to Arizona to spend several months with their children. I think it's funny - they can check in to make sure Mike is watering their plant. I wonder if they'd send me some stills from that? :)