A Traumatized Pigeon, and Other News 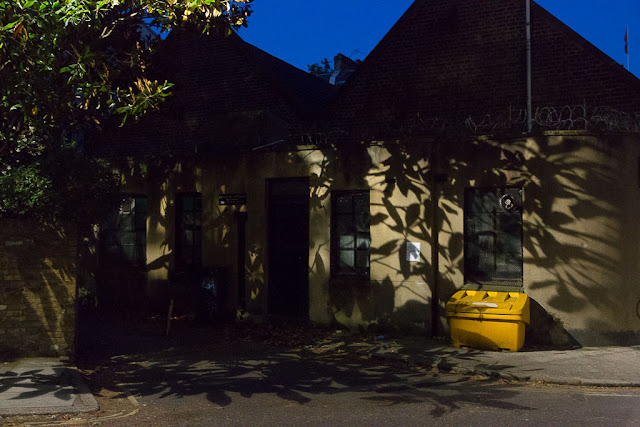 It has been quite an active couple of days!

First of all, I gave bookseller John a print of my photo of him and Sugar, his poor departed dog. He pronounced it "a bonzer!" (Apparently that's a good thing -- an Australian term, which is curious because I'm 99 percent sure John isn't Australian.) He propped it up on his book table with some other items of Sugar memorabilia. Sugar's spirit lives on!

On Tuesday night, Dave and I had our friends Gordon and Donna over for dinner. We took the coffee table out into the garden and dined al fresco, enjoying the cool summer evening. Olga provided some excitement when an addled pigeon clumsily tumbled down and landed a few feet away -- she ATTACKED it and got a mouthful of feathers before I pulled her off. The pigeon fluttered away to a corner of the garden, and we concluded something was wrong with it (even before it encountered Olga's jaws). The dog didn't bother it again, and it was gone by morning.

Yesterday, Dave and I went to see "The Happy Prince," Rupert Everett's movie about the last years of Oscar Wilde. It was interesting, and certainly showed the darker sides of Wilde and his erstwhile love, Bosie. Everett's portrayal of Wilde was somewhat grating, but perhaps that's true to the writer's personality. Dave's unsympathetic review: "Were gay people back then really that annoying? No wonder they got arrested!"

Otherwise I've been doing a lot of reading and journal transcribing, which has entailed sitting on the couch and in the garden for hours at a time. (So, OK, not that active.) Things are going to get busier today and tomorrow, with Trump's visit to the UK. Dave and I plan to join anti-Trump demonstrations both days.

Meanwhile, the UK has had its own political chaos this week, with certain conservative members of Theresa May's cabinet -- notably Boris Johnson, London's former mayor -- resigning over Brexit differences. (This damned completely unnecessary Brexit!) I can't pretend to know what it all means, except more Tory infighting. And then England lost its World Cup match last night, which was a heartbreaker. 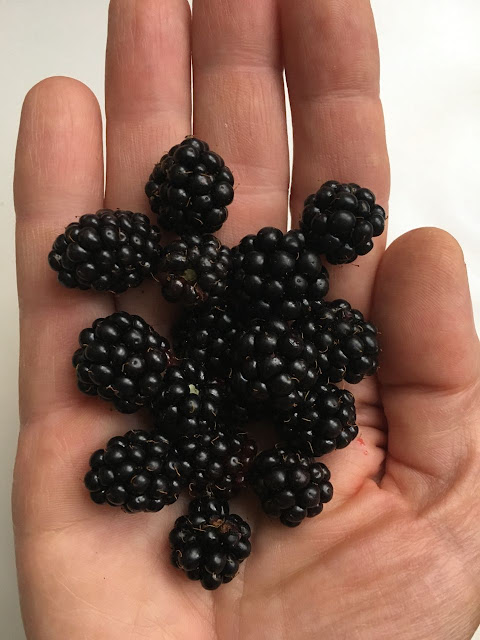 On a lighter note, it's blackberry season! We have tons of ripening berries on our vines, and I picked this first handful a few days ago.

I just learned that Tab Hunter died last Sunday. I read his fascinating autobiography a little more than ten years ago -- all about being every girl's heartthrob while secretly gay in very closeted '50s Hollywood. Tab was a looker when he was young!