Style and a Sunflower 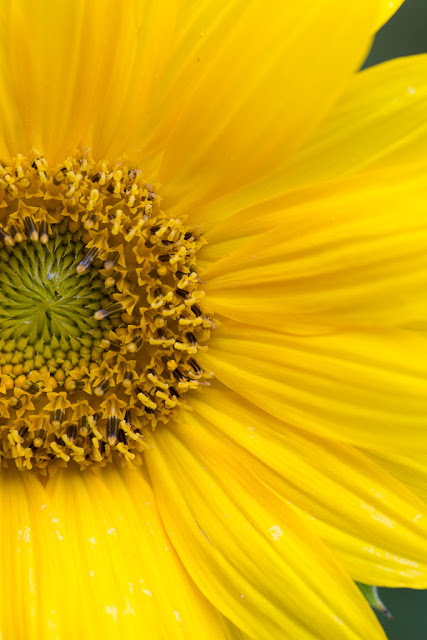 Somehow I managed to stay awake all day yesterday, despite only dozing on the plane. Then, last night, I went to bed and slept seven hours, and now I feel pretty much normal. I'm sure it will take a few days to completely reset my system -- just in time to go to Florida -- but I feel like I'm doing pretty well so far.

Speaking of Florida, I forgot to mention that while standing in the passport and immigration queue at Heathrow yesterday, I saw a guy wearing a University of South Florida t-shirt. (That's my alma mater, in Tampa.) This happens every once in a while in London, but it's not that common, so I said hi, told him I was also a USF Bull and asked him what he studied there. He reacted monosyllabically, just enough to not be completely rude, but it was obvious he had no interest talking to me. We walked away and Dave said, "He seems like a pretty dim bulb."

I staked up a lot of our crazily leaning plants yesterday. I also reset all our mouse traps because I noticed some nibbly marks on Olga's dog food bowl, which we'd sealed in her absence with a plastic cover. Last night we caught two mice. Which brings the grand total since our crackdown in the spring up to, what, fourteen?

I wonder if this is just going to be the new normal? I suppose we could have an exterminator come and crawl around under the house (because I'm definitely not doing that) and try to figure out how they're getting in. Or I could just accept that we live in a 100-year-old house and we're going to kill one or two every now and then. Fortunately they're staying out of our food, which is the main thing.

I watched the John Hughes movie "Weird Science" yesterday. Totally silly, but nostalgic fun. I miss the '80s -- and when I was in them, they seemed so uninteresting and characterless compared to, say, the '60s. Just Ronald Reagan and bad synth music. I remember thinking the '80s had no distinctive style, which in retrospect is of course completely untrue. I guess it's not always easy to see that sort of thing up close.

I feel like our time period now is pretty indistinct, style-wise. All my clothes look pretty much just like they did at the turn of the millennium. (In fact, I'm still wearing some of them from back then!) I remember reading an article years ago that debated the rise of Banana Republic "good taste," the uniforms of khakis and black t-shirts, and how they were robbing us of individuality and a sense of a distinctly stylish time period. What do you think? Will someone ever look back at the clothes we're wearing now and think, "Oh, that's so 2018?"

(Photo: One of the sunflowers we bought from the herb man at the Jester Festival in July. They're both blooming now.)
Posted by Steve Reed at 6:21 AM