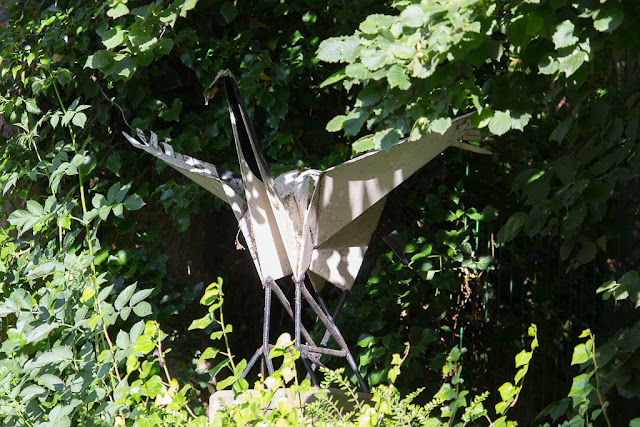 Not far from our flat in West Hampstead is a little park called the Maygrove Peace Park. It's a hilly parcel of land between Maygrove Road and a housing estate, and I walk Olga through there now and then.

Apparently the area was railroad sidings as far back as the Victorian era, and it was formally designated a peace park by Camden Council in 1983. I'd been through several times before I noticed the metal crane sculpture standing on a slope above the park's entrance on Maygrove Road. It's tucked back in the foliage high above the sidewalk, so it's easy to miss.

The sculpture is by Hamish Black and it's inspired by the story of Sadako and her paper cranes. A Japanese girl who survived the Hiroshima bombing only to be afflicted with leukemia nine years later, Sadako set out to make 1,000 origami cranes for good luck and healing power. A famous children's book was written about her. Apparently there's some dispute about whether she finished folding the cranes before she died. 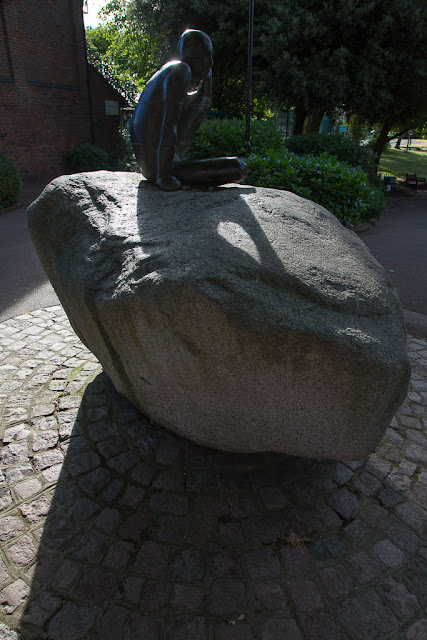 On the other side of the park, there's a sculpture by Antony Gormley, called "Untitled (Listening)." And there are slabs in the sidewalk bearing famous quotations by leaders who advocated peace.

It's an interesting little park. Of course, Olga is oblivious to all the messaging. In fact, when we walked through yesterday morning she saw a cat, and I'm pretty sure peace was the last thing on her mind. 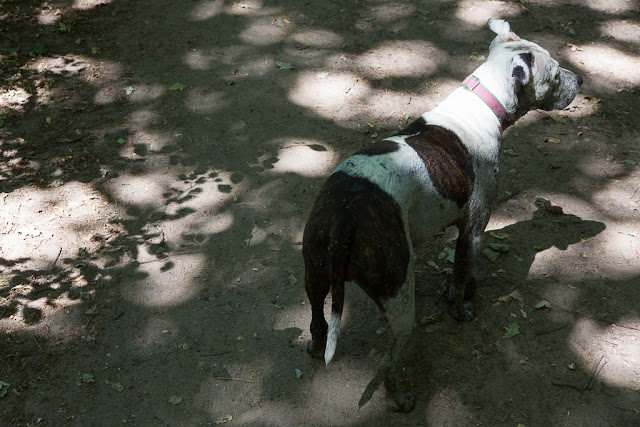 Here she is later in the day at Hampstead Heath. It was a great day for shadows!

Dave returns this morning from his adventures in the American midwest. I'm sure he's ready to embrace his British lifestyle once again. He's not going to believe how empty the cabinets are, after my two weeks of creative eating! (We still have six jars of cinnamon, though.)

The other day, feeling like I'd been sitting in the house too long, I went to one of our local high street cafes. I took my New Yorker and sat outside, and as I began sipping my Americano I heard a high-pitched, Hyacinth Bouquet-like voice.

It was an older woman at a nearby table, talking to someone on the phone. She got quite upset -- something about tickets. She was trying to tell someone where to find them, I think. Anyway, she sounded warbly and almost tearful and began making quite a racket, basically shouting. (Imagine Hyacinth shouting!) An older man next to me reading a yellowed paperback looked at her a few times, then suddenly stood up and said to her quite loudly, "Can I help you in any way?"

Which seemed an odd thing to say. Maybe he thought she was talking to him. Or, more likely, it was his obliquely polite British way of saying, "PIPE DOWN!"

Anyway, even more flustered, she lowered her voice and, after getting off the phone, gathered up her shopping trolley and wandered off across the street, presumably to help someone locate those tickets. I was just glad the senior citizen face-off had come to an end!
Posted by Steve Reed at 6:20 AM