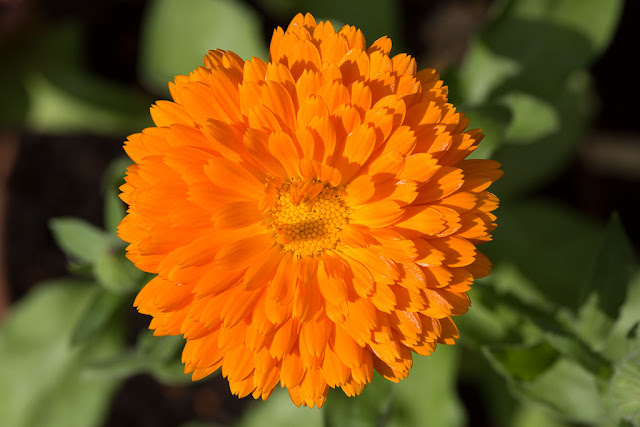 This is a calendula that we bought from the herb man at the Jester Festival last weekend. (Yeah, I know, it looks a lot like that zinnia I posted about a week ago!) We got two of them -- I put one in the garden and one in a pot in case the garden specimen gets devoured by slugs. Hasn't happened yet, which is a good sign.

We have finally reached the point where all our July social and political obligations have been fulfilled. Now we're just biding our time until we take off tomorrow for Southeast Asia. It still doesn't seem real to me. I haven't even started to pack, but I'm thinking about what to pack -- so I suppose I've started mentally.

Yesterday I never left the house. With Olga already off at her kennel, I don't even have a dog to walk!

Speaking of Olga, her kennel has a webcam feature that allows us to check in on her at any time. When I set it up yesterday, this is what I saw: 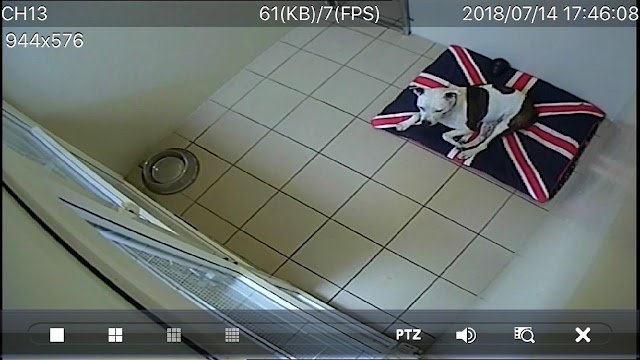 Somehow, that's not very comforting. She looks like she's not sure why she's there. That's just her "bedroom," as they call it -- she supposedly also has access to a "private, fully covered exercise area," which I think is through that little doorway at the back. As you can see, she took her bed and her Kong with her.

I think I may have to take this app off my phone. Otherwise I will be compulsively checking on Olga the whole time we're gone.

It looks like a much smaller right-wing response to Friday's anti-Trump march did indeed take place in London yesterday, but it appeared to be less about Trump and more about supporting an English far-right leader who's currently in jail. Isn't it interesting that virtually all of the demonstrators seem to be white men?

Last night we finally watched the charming movie "Lady Bird," which I really liked.
Posted by Steve Reed at 8:05 AM