Battling Butterflies and a Fox Hat 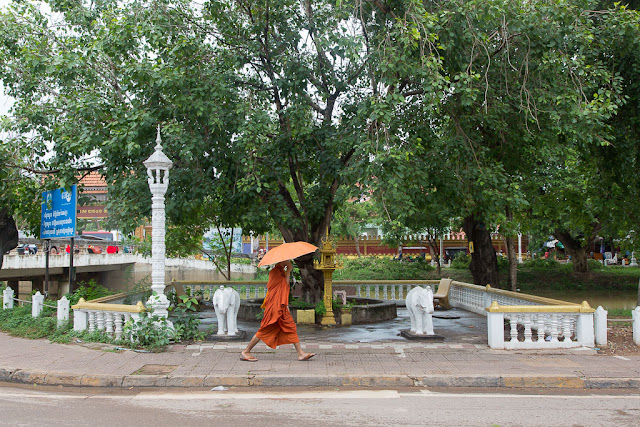 Yesterday we had a leisurely day in Siem Reap. It started off rather strangely, when we were rousted from bed by loud music and cheering. I thought maybe there was a wedding or some other party nearby, but it turned out to be a passing political parade on the road outside our hotel. Apparently elections are scheduled in a week or so, and this was one political party's efforts to drum up some votes:

Cambodians certainly seem happy about their politics, don't they? Unlike Americans at the moment.

I spent the morning reading by the pool, and then Dave and I went to lunch at a restaurant called the Butterflies Garden, featuring dozens and dozens of colorful butterflies in a screened-in garden enclosure. There's also a fish pond, somewhere between the size of a big bathtub and a small swimming pool. The food was excellent.

Here's something I never knew: Apparently butterflies fight each other. We saw a few that looked rather tattered, and then I saw one land on another in a way that seemed aggressive. Sure enough, it's all about defending territory. I suppose in the tiny environment of a screened enclosure a little aggression is understandable. It's "Lord of the Flies" -- for real! 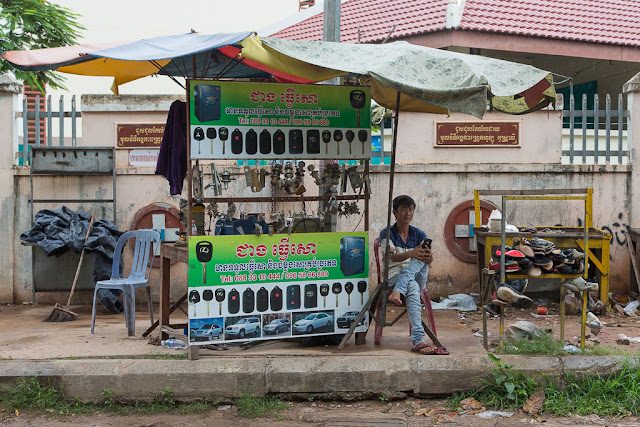 Then Dave went back to the room and I took a walk through town. I passed this guy serving as a dual locksmith and shoe repairman, and I asked him if I could take his picture. Why is it that locksmithing and shoe repair go hand-in-hand? We often see the same combination in London. 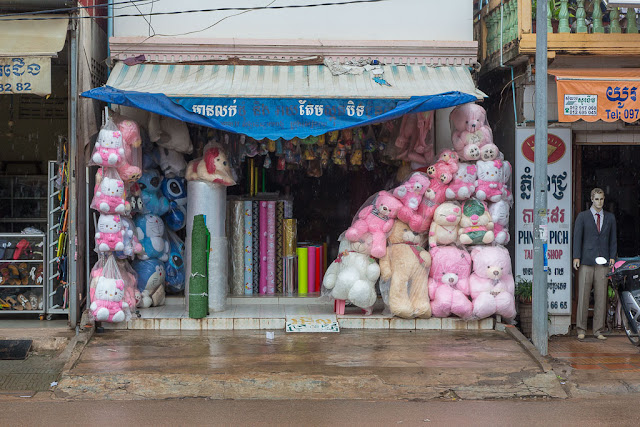 My goal was to walk all the way back to the hotel, and I almost made it, despite having only a fuzzy map of Siem Reap in my head. I just walked and walked, figuring I could always get a tuk-tuk if I got hopelessly lost. As it turns out, I was pretty close to our hotel by the time I got tired and caught a ride. 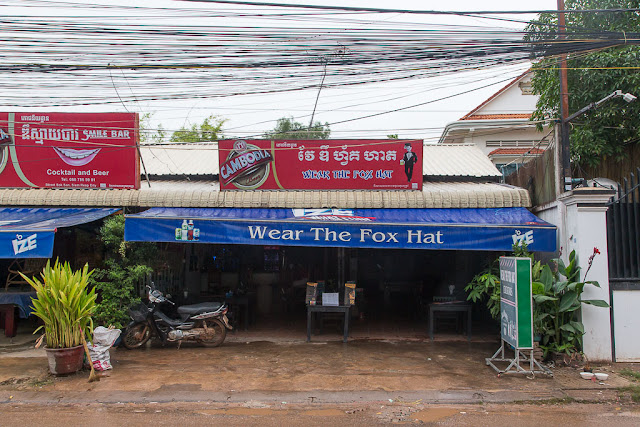 I passed a lot of curious places along the way. This bar, for example. I wondered if "wearing a fox hat" had some kind of significance? And sure enough, there's a picture of a guy on the sign, wearing a tuxedo and, yes, a fox hat: 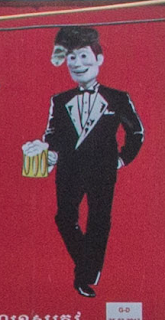 I was extremely bewildered.

Then I came home and Googled it, and apparently it's a pun, relating back to this 1999 Miller Beer commercial. File this under "moments in popular culture that I have missed."

(I had to travel to Cambodia to learn this?!)

Last night, we went to dinner at the Embassy Restaurant, an elegant place near the river. We had a six-course meal with wine pairings for me (herbal tea for Dave, who has sworn off alcohol because of his Crohn's) and it was very good. The chefs are two women with the same name who call themselves "twins," and Dave noticed that every employee we saw was a woman. Sisters are doin' it for themselves!

Most of today we're relaxing in Siem Reap, and then this evening we're on a plane to Hanoi. Coming to you tomorrow from Vietnam!
Posted by Steve Reed at 6:38 AM