Buddha on a Hill 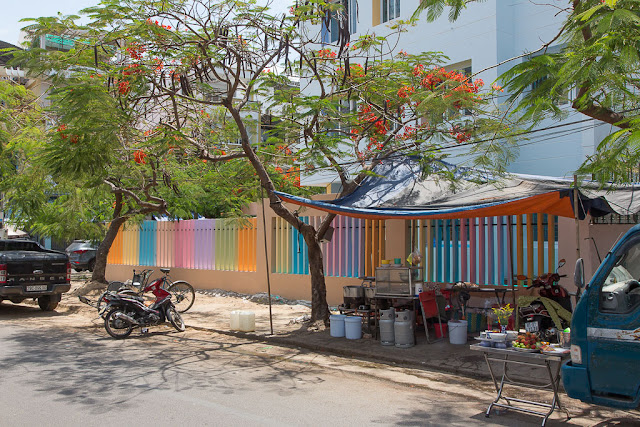 I went into the town of Nha Trang yesterday. It's bigger than I'd imagined -- a city, really, with a coastline dominated by high-rise hotels. But on the side streets were colorful and interesting sights, buildings with sherbet-hued paint jobs and interesting shops and blooming trees. 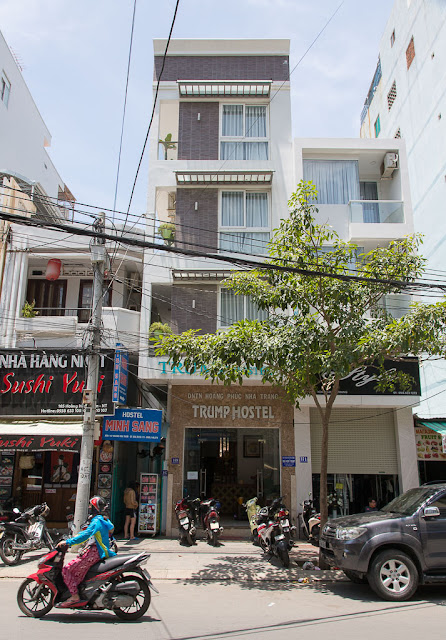 (Apparently Trump's Miss Universe pageant has been held in Nha Trang, so they know who he is around here. I wonder how he feels about this tiny hostel borrowing his name? He doesn't like to be associated with tiny anything.) 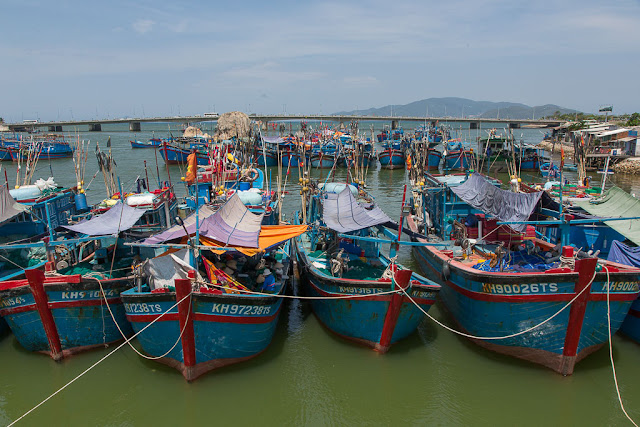 I walked through the city and over some bridges, which gave me a good view of the harbor and its uniformly blue fishing boats. If you look on the second boat from the left you'll see a cluster of people -- most wearing their traditional straw hats -- mending nets beneath the shade of those tarps.

Nha Trang has sidewalks, but outside the city center apparently no one uses them for walking, because they are wildly uneven and packed with parked motorbikes. Seriously, they are largely impassable. From what I could tell, in those areas I was pretty much the only pedestrian! Everyone else was on some kind of wheeled conveyance. 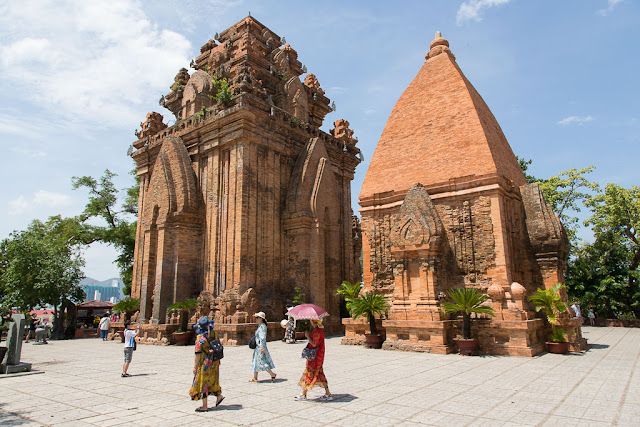 This was my first destination -- the Po Ngar Cham towers. The Cham people, who were Hindu, built the towers beginning in the eighth century. They are now used as Buddhist shrines. 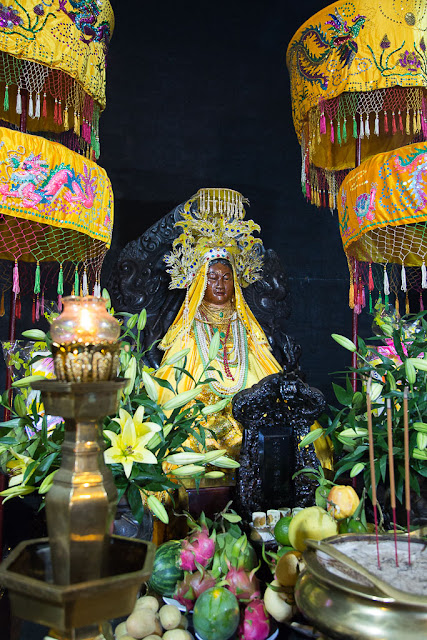 Inside the large one is a statue of the goddess Bharagati, allegedly carved in 1050. As you can see she is surrounded by incense and various offerings. The interior of the tower is entirely black, I suppose from smoke, which gives it a weird feeling of infinite space. 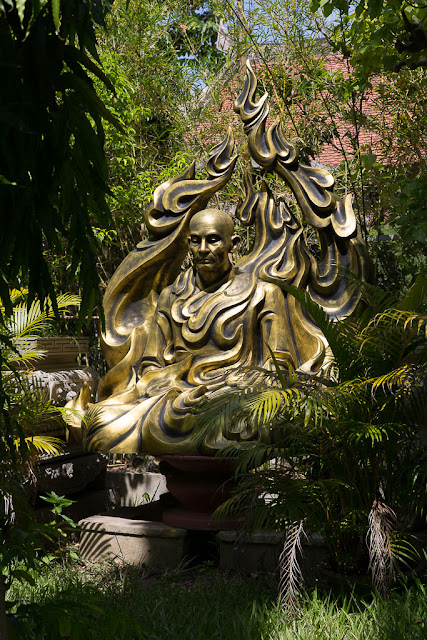 From there I went to the Long Son Pagoda, situated on a hill to the northwest of town. (I didn't want to brave walking again, so I took a taxi, though in order to make the driver understand where I wanted to go I had to pull up pictures of the pagoda on my phone. Apparently I don't pronounce "Long Son" the way a Vietnamese person would.)

At the entrance to the temple was this statue, vividly commemorating the monks who immolated themselves near the beginning of the Vietnam War. 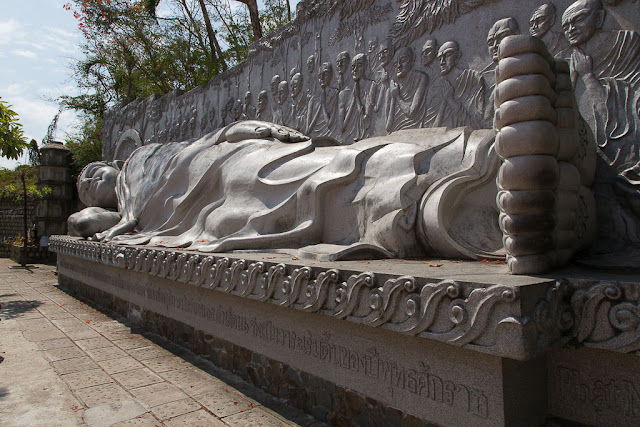 I didn't go into the temple itself, which was zealously guarded by a very particular doorman who turned away several tourists wearing knee-length shorts. (Modest attire is a must in Buddhist temples, but usually knee-length seems OK.) My own shorts came to just below my knees, but I didn't want to risk rejection. Something told me I shouldn't cross that guy. Instead, I started up the steps leading up the hill behind the pagoda.

There I found a large reclining Buddha, surrounded by carved praying monks. 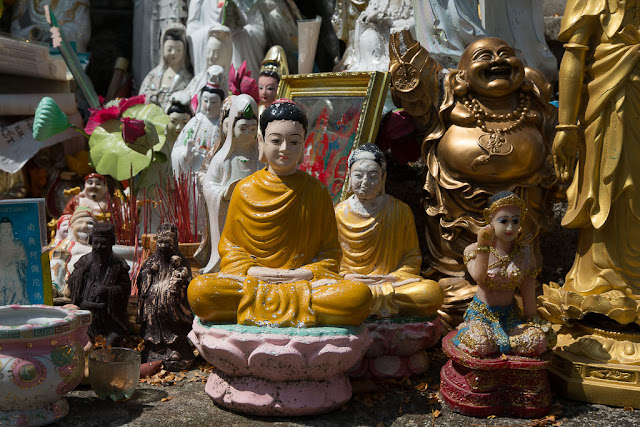 On a nearby wall, people had left numerous little carvings, incense sticks and other religious trinkets. 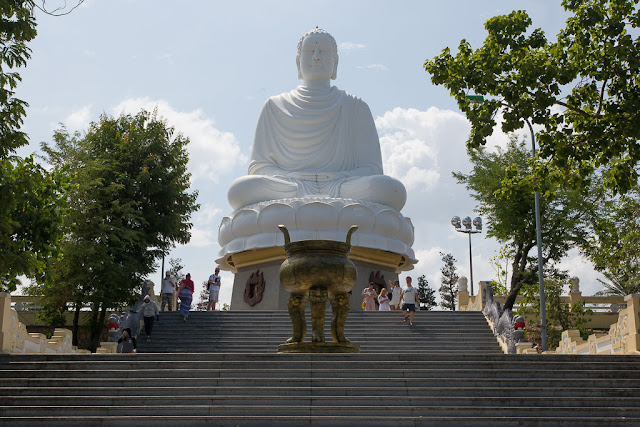 And at the top of the hill sat this 80-foot-high statue of the Buddha, on a pedestal surrounded by images of (again) the immolated monks. According to my guidebook it's "an important symbol of Nha Trang," and it was certainly impressive and beautiful.

Visitors can actually enter the statue through a door at the back, and the doorman here wasn't as scary so I did go inside. There's a small shrine, and at the doorman's insistence I lit some incense and placed it on the altar -- in exchange for a modest donation, of course. 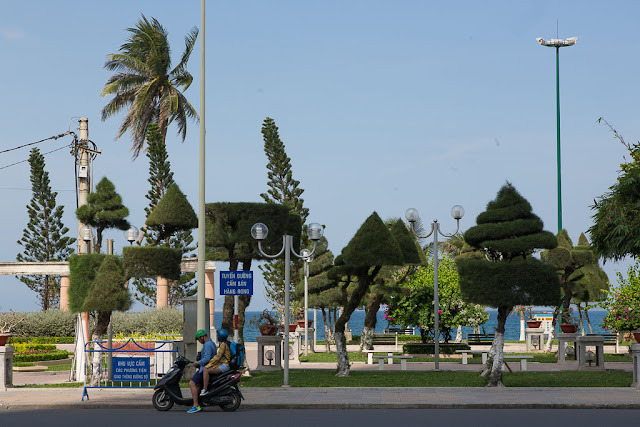 By this time it was early afternoon, so I caught a taxi back to the town center. (The driver tried to charge me a flat rate but I insisted he use the meter, and my fare turned out to be about half of what he'd originally wanted!) I grabbed a sandwich at a seaside restaurant across from this park before catching the 3:30 p.m. shuttle bus back to our hotel.

It was fun to get back into the hum of Vietnamese society and see some sights!
Posted by Steve Reed at 7:01 AM