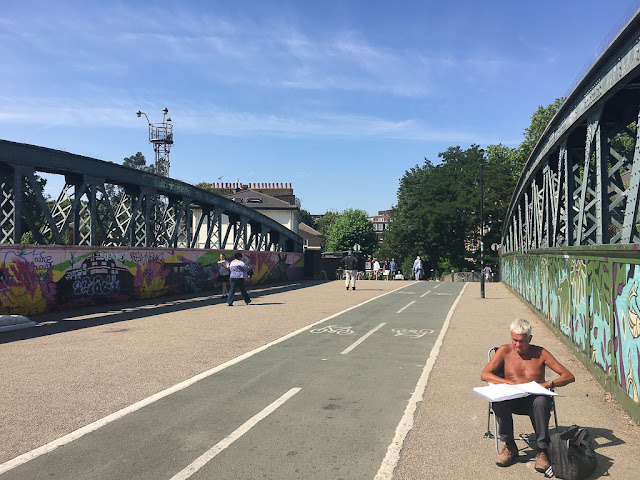 Well, our Fourth of July passed without incident. I did hear fireworks last night, from some American neighbors (I'm guessing?), but we made no attempt at any celebration of our own. In fact, we took dinner to a friend in South London who had a heart attack last week -- he had quadruple bypass surgery but seems in good spirits. You should have seen me and Dave, climbing into a cab with a huge pot of vegetable/lentil curry and a wrapped blueberry cobbler and ferrying it across town. (The car, incidentally, cost £30, probably more than the food.) We sat out on his back deck with him, his visiting mother and two of his friends (one of whom grew up in, of all places, my hometown of Tampa!) and enjoyed the soft evening air.

We even got a smidgen of rain last night, enough to dampen the garden, but there's no more on the horizon for the next ten days.

Speaking of the garden, I did a ton of work out there yesterday. We had some more repotting to do, so after a trip to Homebase I repotted five plants and planted one more in the ground. (Digging! Ugh!) 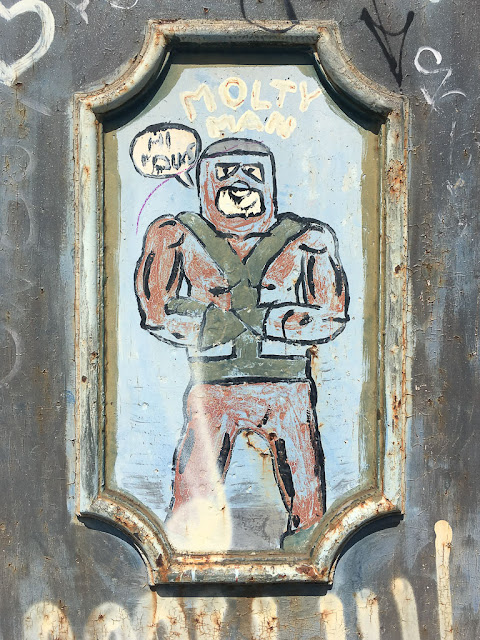 We had some excitement in West Hampstead on Tuesday morning when a huge fire burned some balconies on a brand-new apartment building near the tube station. I was working in the garden and kept hearing sirens -- I wondered what could be happening. Then Dave and I walked to the tube an hour or so later, and the fire crews were still mopping things up. I don't understand why balconies would burn that fiercely. What on earth are those things made of?

(Photos: Getting some sun on a railway bridge near Chalk Farm on Tuesday; a painted panel near the bridge.)
Posted by Steve Reed at 7:46 AM