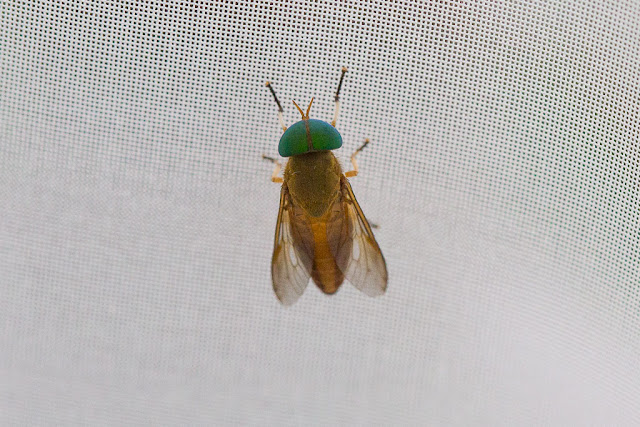 This spectacular little fly was stuck in our hotel room yesterday, clinging to the curtains. Check out those eyes! I'm not sure I've ever seen a fly quite like that. I took its picture and then caught it in my hand, took it to the door and watched it fly off into the afternoon.

Later I tried to look up what kind of fly it was, and I'm not sure, but it seems like it might be a type of horsefly. Which is the "sad trombone" ending to my fly story, because I'm sure I've smacked the hell out of many horseflies in my lifetime, and liberating one seems a little silly.

Then again, it didn't bite me, so who knows.

Ho seems to have lessened his grip on my gut, which is much appreciated. I still didn't feel 100 percent yesterday, but this morning I feel better. I'm going to go to town today, although it is freaking hot out there. I walked the beach this morning, a bit later than in previous days, and the heat made my limbs heavy and my head as light as a balloon. 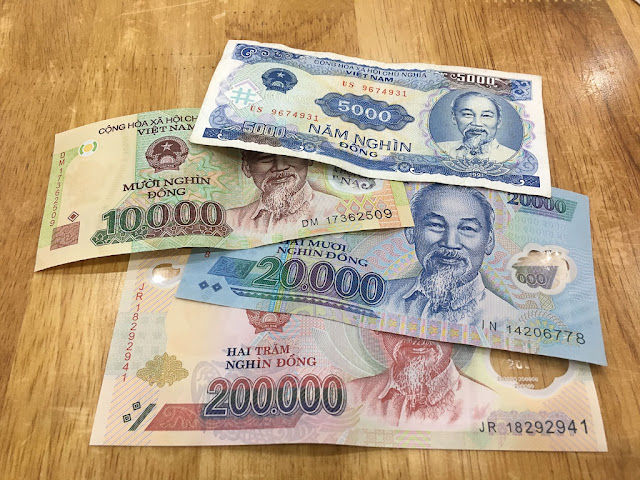 Let's talk about this crazy Vietnamese money. The currency here is called the dong, and there are lots of superfluous zeros attached to it. That 200,000 dong note above is worth about $8.65, or £6.55. The other notes are basically small change -- the top one is worth less than a quarter.

Consequently using dong can be a little cumbersome. For example, I signed up for a guided excursion to a waterfall and some other local sights tomorrow, and the cost was 2.36 MILLION dong (roughly $100 or £77). Seeing it on a bill can be a little scary, but you soon learn to disregard all those extra digits. (Of course, this is true only when you're lucky enough to be converting foreign currency -- I'm sure to the Vietnamese 5,000 dong actually means something.)

In Cambodia, we barely even saw the local money. All our transactions were in US dollars, the currency of choice in Siem Reap and the touristy Angkor area. Occasionally when we were due less than a dollar in change, we'd get a Cambodian bill instead, but I usually just gave it right back. I'm doing my duty to boost the local economy!
Posted by Steve Reed at 7:02 AM