Communist Coffee and a Rocky Swim 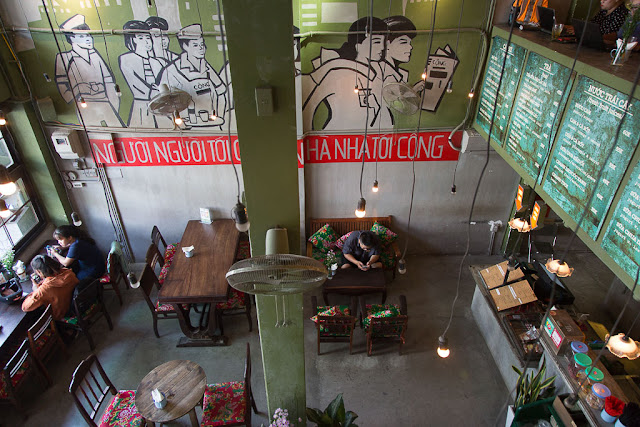 Yesterday was my "adventure tour," a trip to a waterfall outside Nha Trang with some stops along the way, arranged through our hotel. My guide was a young guy named David who hauled me around on the back of a Vespa, and was ever-patient with my periodic requests to pull over for a photo.

We started the tour at a coffee shop in town called Cong, which is not pronounced quite like it looks -- more like "Cowm," or something like that. Anyway, it means "people," and the cafe is a stylish Communist Chic place with decor reminiscent of North Vietnam back in the '60s. David suggested he order for me, and he chose a coconut frappuccino sort of drink unlike anything I would have ordered for myself, but it was very good. (Also full of blended ice, but I drank it anyway. What the heck.)

I seriously doubt one could get a coconut frappuccino in North Vietnam in the '60s, by the way.

(And yes, I was fully conscious of the irony of me, an American, being brought to a place celebrating Vietnam's Communist roots.) 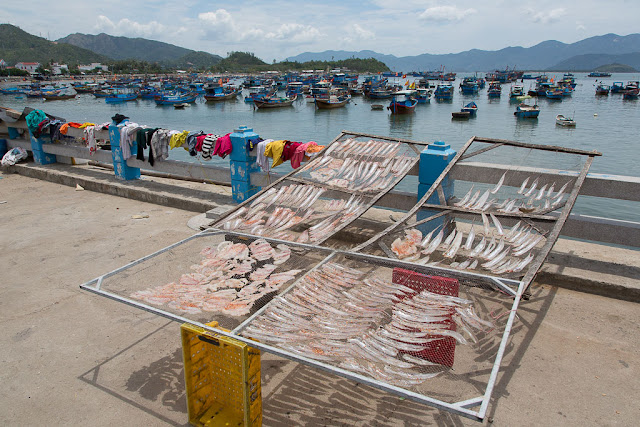 From there we hopped on the Vespa (yes, I did get a helmet) and rode north out of town. David stopped in a photogenic fishing village where we got some shots of the boats, drying fish and someone's colorful laundry. 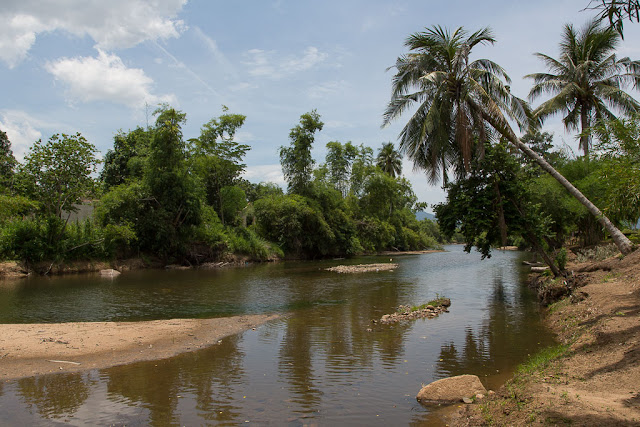 Our eventual destination was the Ba Ho waterfalls, a series of cascades on this river. We turned off the main road onto a smaller track, wound through a village full of chickens and tiny pastel houses, parked the bike, walked a lengthy wooded path and then clambered over some rocks to get there. The rocky part was fairly strenuous -- hence the adventure in my "adventure tour," I suppose.

The tour promised swimming "in the cool, clear water." 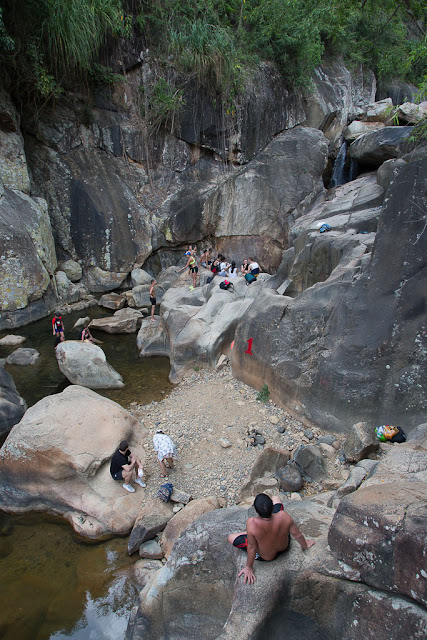 The coolness wasn't in doubt, but the clarity was debatable. Apparently there's not a whole lot of water moving through the falls at the moment so the levels are a bit low. (I guess this part of Vietnam hasn't been seeing the rains that have struck the north.) There are actually three sets of falls, but we didn't go above the first one.

Still, I swam, along with several other groups of visitors, Vietnamese and European alike. It did feel good to get in the water after that hot Vespa ride. Lots of little minnows nibbled my feet, just like those fish pedicures that were all the rage a few years ago. 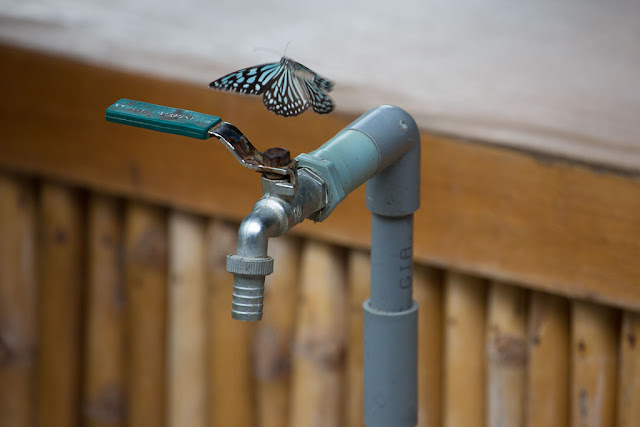 We walked back up the path to a cafe for lunch, where David ordered ridiculous quantities of food (this tour outfit certainly doesn't scrimp on feeding its patrons). We saw some interesting butterflies along the way, including this one that took off just as I clicked my shutter. 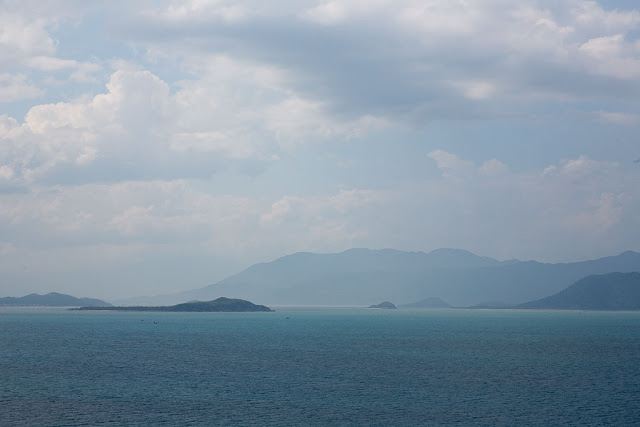 And from there we were back on the Vespa and headed toward town, where David dropped me off in mid-afternoon to catch the shuttle bus back to my hotel.

Some of you asked what Dave (my spouse, as opposed to the guide) does while I am out on my sightseeing adventures. Dave is just not into sightseeing -- he much prefers to stay at the resort, go to the spa, and hang out in our air-conditioned room. (In terms of pure animal comfort I can't blame him at all -- our room is pretty amazing.) It's basically the same pattern we follow in London. I am much more an out-and-about kind of guy.

Last night Dave and I celebrated our final night in Vietnam with a fancy dinner at one of the hotel restaurants, and this evening we fly back to Hanoi and then to London. So my next post, hopefully, will be coming to you from home sweet home! (We don't get Olga back until Monday, though. And yes, I have been checking on her with the dog-cam every day throughout our visit!)
Posted by Steve Reed at 7:38 AM