Other Lives, Another Time

I thought you might like to take a look at a few of the old postcards I picked up the other day at Greenwich Market. I love old postcards because they're usually pretty inexpensive, and the ones that have been sent often tell a story, or at least a small fragment of a story. These were £1 each! 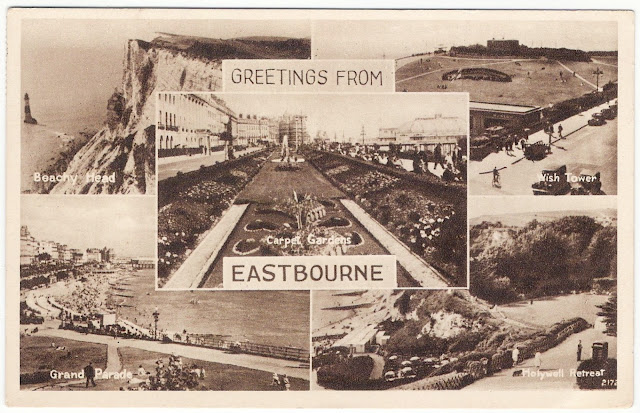 July 1950: "Dear Rosemary, Just a line letting you know we are still going along OK. Having a run around Eastbourne today but weather very squally. Love to all, Mum & Dad."

(Sounds pretty miserable! Mailed from Eastbourne to Laindon, Essex. Dave and I made a quick jaunt to Eastbourne ourselves just a few years ago.) 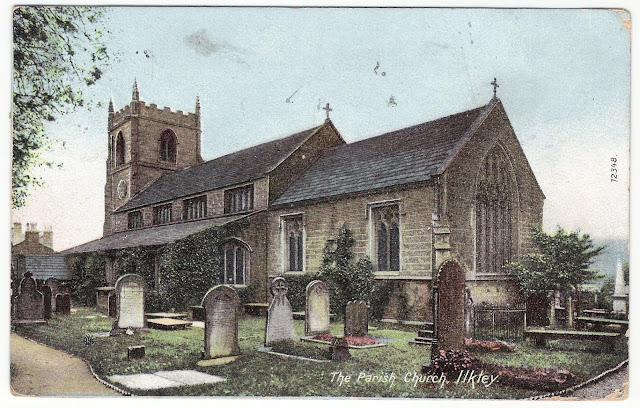 May 22, 1907: "My Dear Sarah, Ethel and I got home quite safe about 11:30. Oh dear, we had a slow journey. It took us two hours to come from Hudd. to Brad. It was awful stopping between every station. My brother met us. They thought we were going to stay a bit longer, if we had not come by that train they would have given us up. I hope you had a pleasant day at Hope. Bank. Ethel will write letter. Annie"

(Huddersfield to Bradford is 15 miles by car, according to Google, and apparently today's most direct trains take a little more than half an hour. The card was mailed from Silsden, not far from the town of Ilkley, the location of the pictured church -- both are north of Bradford nearer what is now the Yorkshire Dales National Park. I have no idea what "Hope. Bank." could be.) 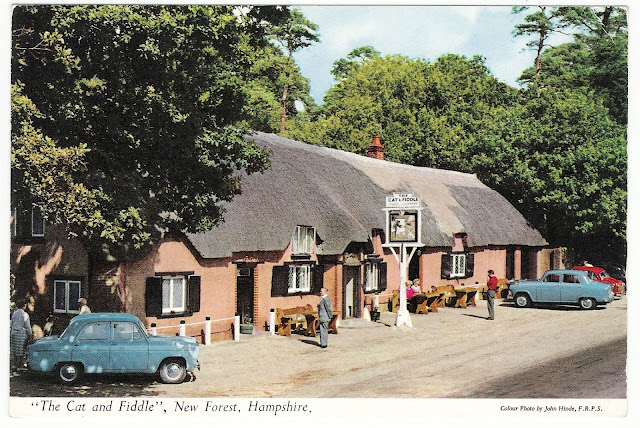 Sept. 25, 1973: "Just missed seeing you go by a second -- you were just getting into the taxi. Do hope you have enjoyed your holiday and that the weather has been better than it is here. Comfortable in hotel and glad to get away from things. Love from us both, Mary and Douglas."

(Mailed from Bournemouth to Brighton. The pictured pub still exists, outside the village of Hinton between those two cities.) 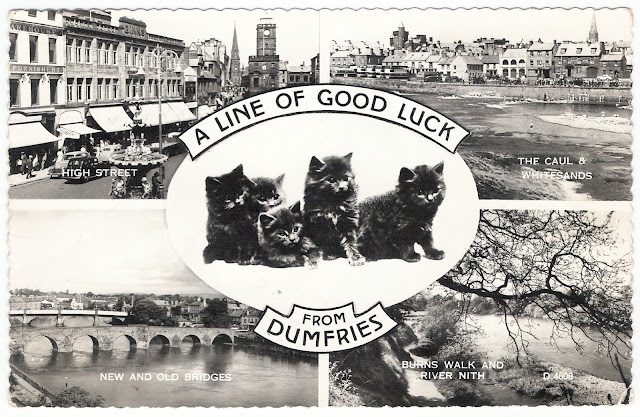 Aug. 9, 1966: "We are having a nice time. Weather has been lovely. Hope you have a nice holiday. See you when you come home. Lots of love, Mary"

(That Mary -- so wild and witty! Mailed from Castle Douglas, not far from Dumfries, to Pinwherry, a village in Ayreshire, Scotland. It also bears a stamp dated 1977 from the "Postcards and Postmarks Library" in Skegness, where it apparently wound up at some point.)
Posted by Steve Reed at 6:50 AM